The Puff Adder is a notorious snake species found throughout many countries in Africa. There are many misconceptions about this snake, the most common ones that they are “fat and lazy”. This is far from the truth. While you certainly don’t want to be bitten by one, there’s far more to these snakes than the myths you hear. They’re fascinating creatures. 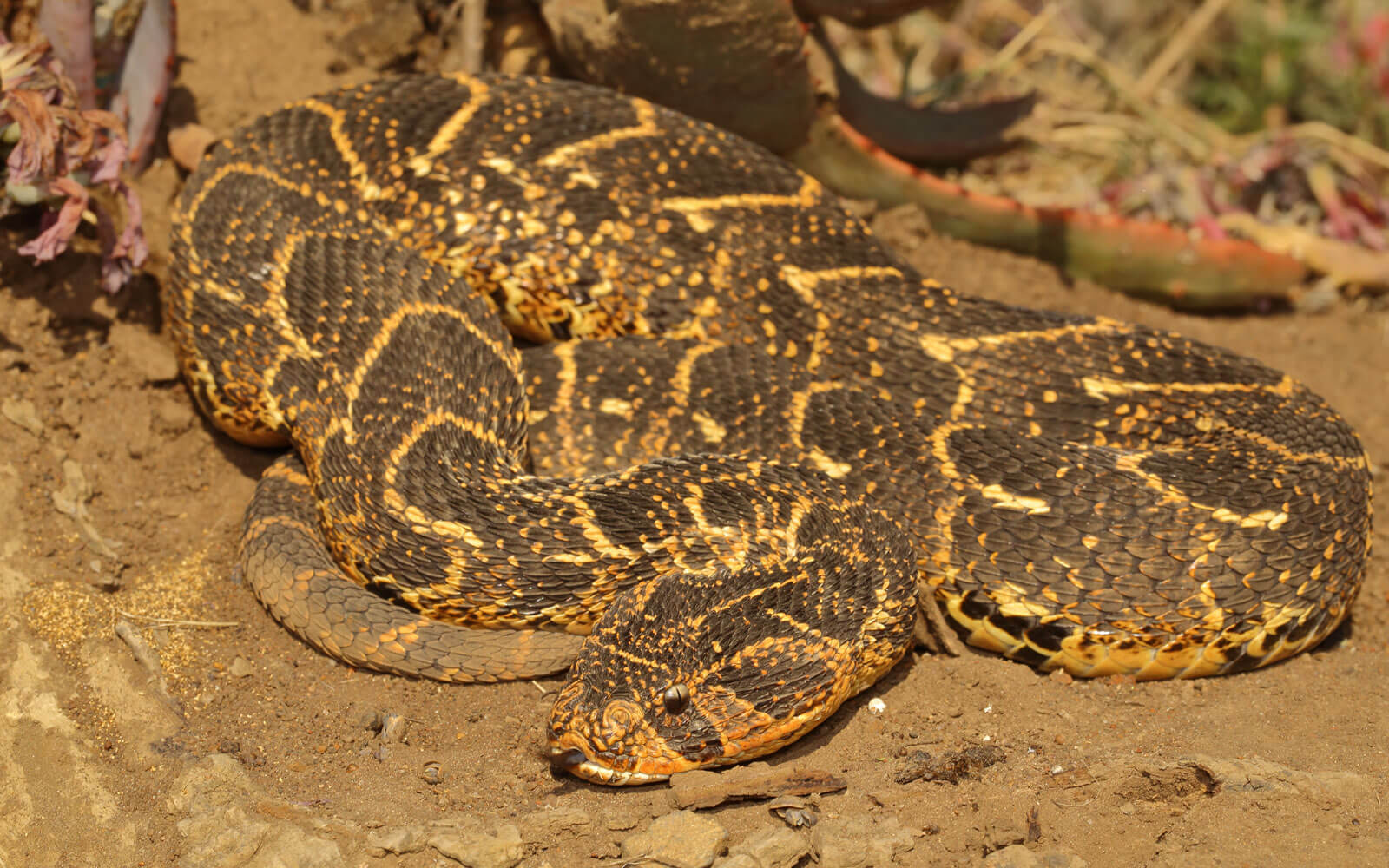 Puff Adders are big, stocky snakes, growing to over a meter in length. This bulky appearance gives off the impression they’re on the chubby side. If you had to feel a Puff Adder, which you should never do, I suppose, you would find that they are incredibly powerful, muscular snakes. Although, again, rather avoid grabbing one.

They do have a large head, which contains their long fangs and large venom glands, as well as muscles. There is a common myth that venomous snakes all have triangular heads. This may be true for some species, such as the Puff Adder, but snakes like mambas, cobras and Boomslang, among many others, do not have a triangular head. And they most certainly are venomous.

Puff Adders have chevron markings down their bodies, which are quite distinctive. Colour-wise, in interior parts of KZN, from Krantzkloof and further west, are generally yellow and black. They’re beautiful! In dryer parts, for example, Hluhluwe, they’re shades of light brown.The skin of the Puff Adder has a rough appearance to it, and that’s because they have keeled scales. Each and every scale has a ridge in the middle of it, except the ventral (belly) scales. Although the function of keeling is not conclusively known, it results in less reflectance off the body surface, improving camouflage. Keeling may also improve rates of warming during basking, but this has never been studied in a scientific manner.

Puff Adders are one of the few snake species in the area that you can tell males and females apart with relative ease. Females have short, stubby tails, whereas males have much longer tails. You don’t need to get too close to see this, but I suspect most people would rather stand far enough that you can’t see this. 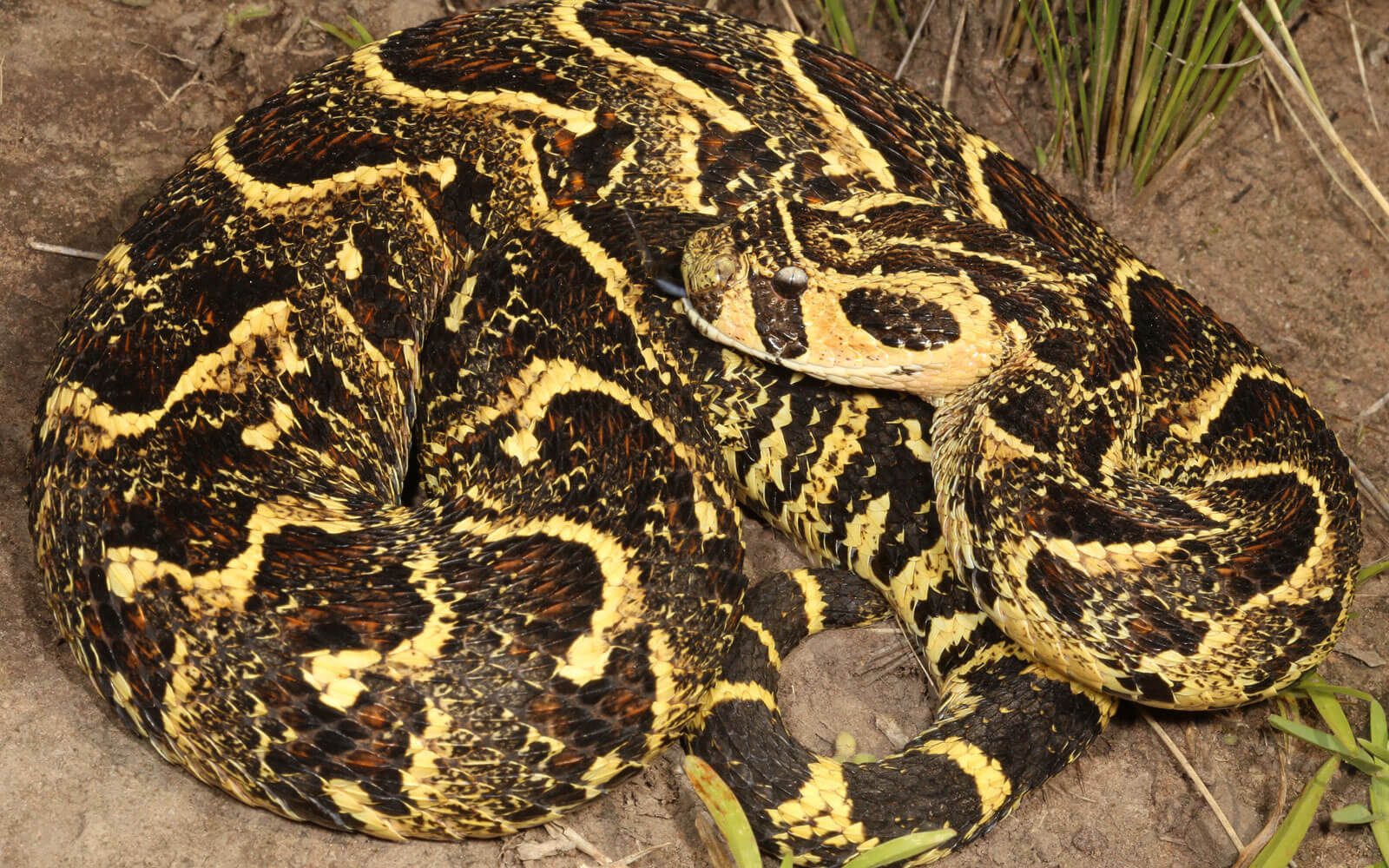 A specimen from the Upper Highway Area 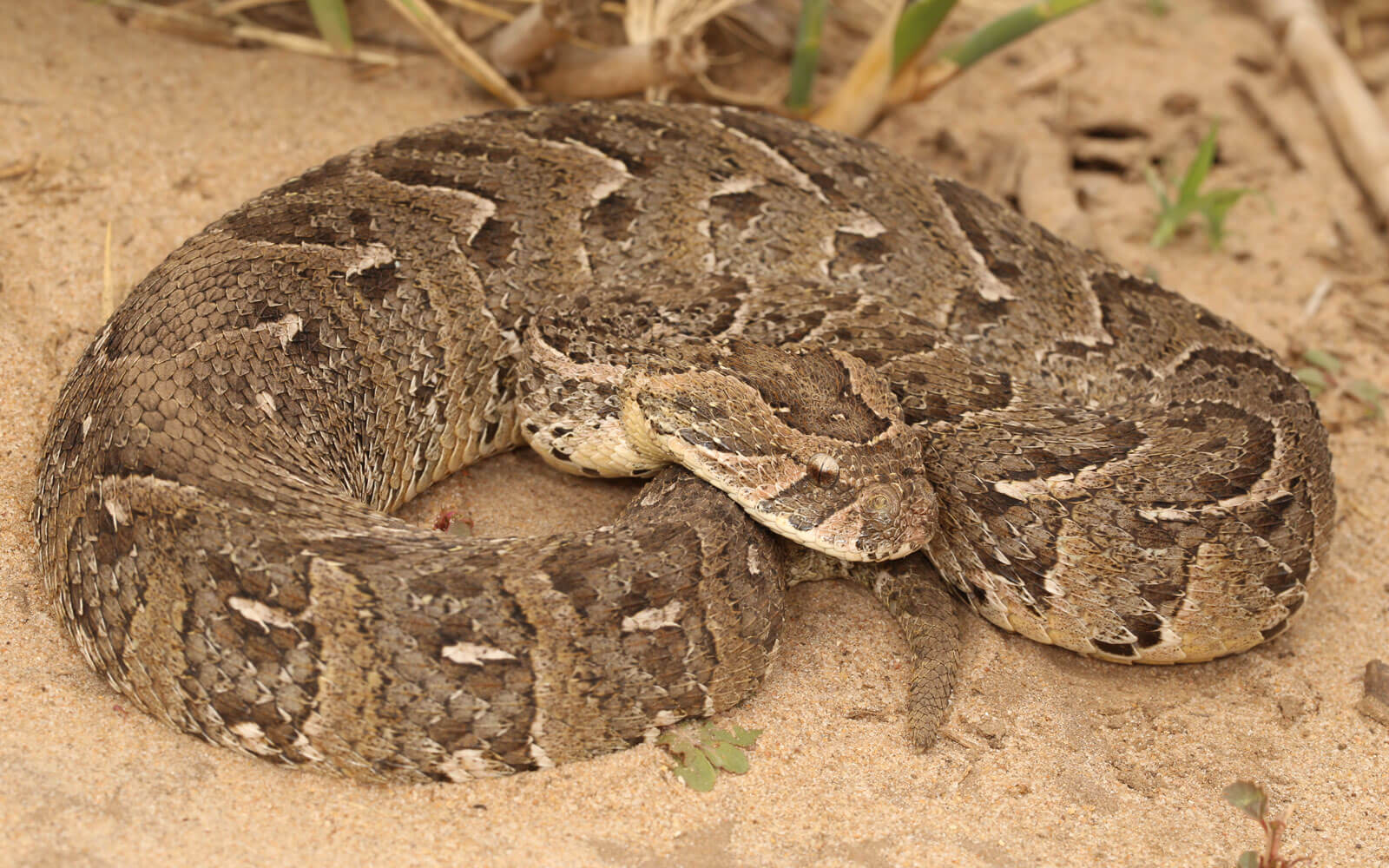 A specimen from Hluhluwe, northern KZN

What’s the difference between Night Adders and Puff Adders?

These two species are often confused for one another, but there are a number of relatively obvious differences. Firstly, the Rhombic Night Adder is far, far more common than the Puff Adder around Krantzkloof, and everywhere in Durban, really. They’re not picky on habitat, and feast on toads, which are abundant. Puff Adders aren’t as widespread, and they’re not as common in the Upper Highway area as Night Adders. Puff Adders are occasionally encountered in homes around Krantzkloof, or seen in the reserve, and then they become more common further west. They do not occur closer towards the coast, in areas such as Pinetown, Westville etc.

Rather than the chevron markings, Night Adders have what people usually describe to me as, ‘diamond-like markings’, going down the body. These markings are a dark colour, and the rest of their body is a light brown to grey colouration. Night Adders also have a very distinctive V on the nape of the head. The head is also small and non-distinctive in comparison to the head of a Puff Adder. 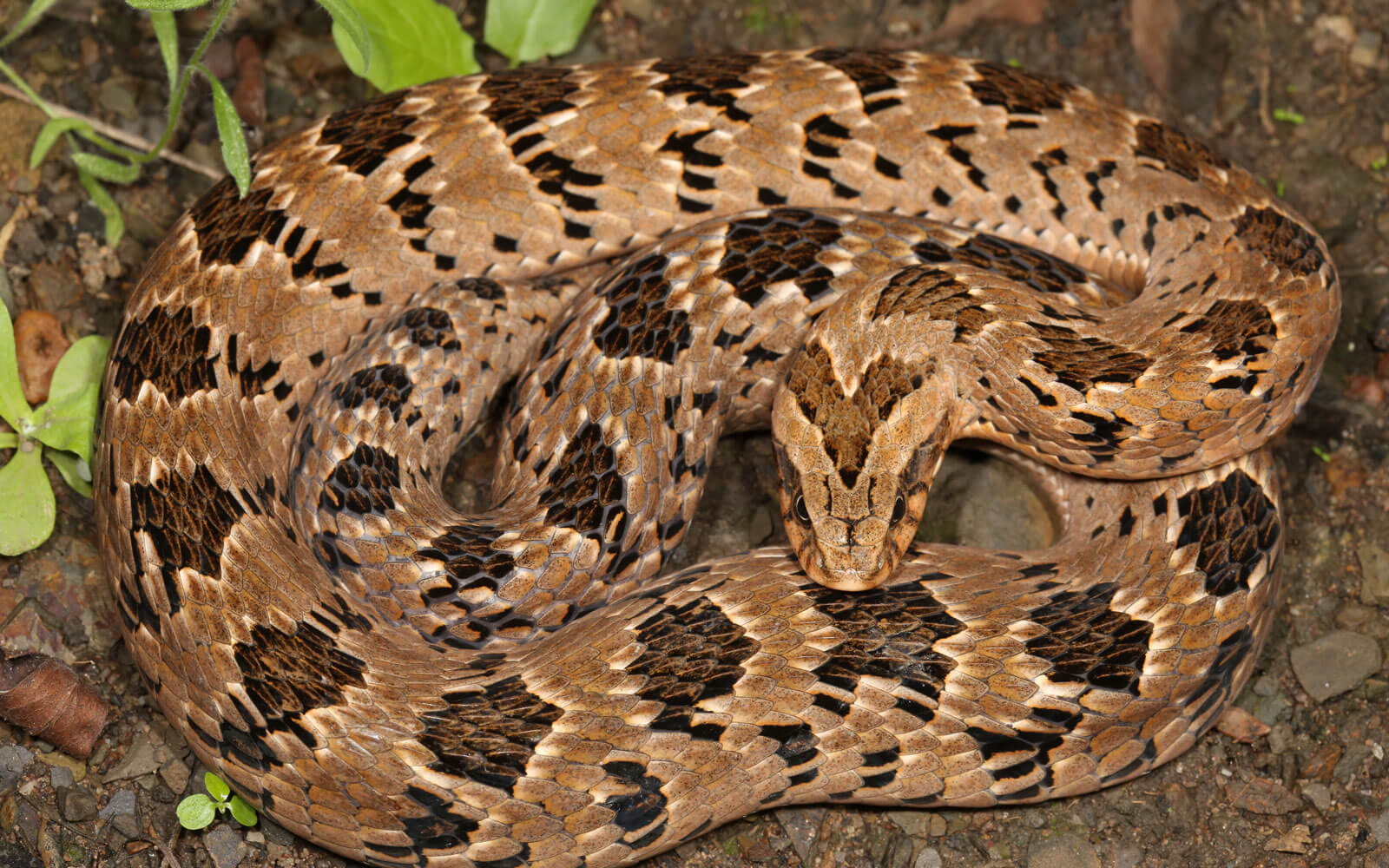 Both of these species will hiss if threatened, which leads to many Night Adders being confused for Puff Adders. In fact, many species hiss, even Black Mambas. Puff Adders, though, are one of the loudest!

One other difference is that Puff Adders give birth to live young, like all adders in the Bitis genus. Night Adders (Causus genus), on the other hand, lay eggs. Fun fact: one Puff Adder gave birth to 156 babies! In a zoo, in Europe. Usually, it’s anywhere between 18-35+-.
Oh, if you see what looks like a Night Adder in the day time, it most likely is. I don’t recall ever seeing one at night! They tend to be active mainly at dusk and in the early morning.
Night Adders also have a relatively mild cytotoxic venom, and it is not nearly as potent as that of a Puff Adder. 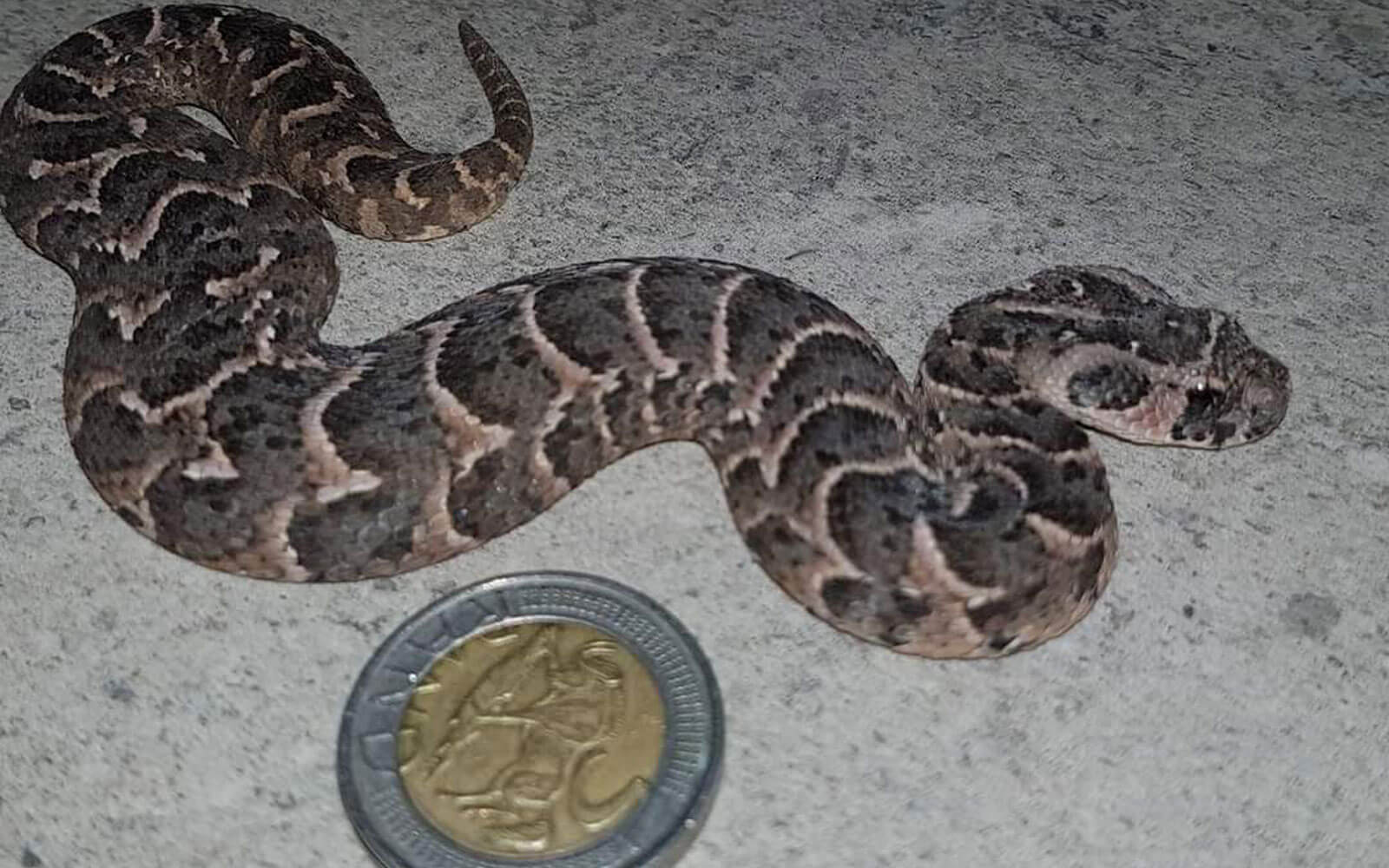 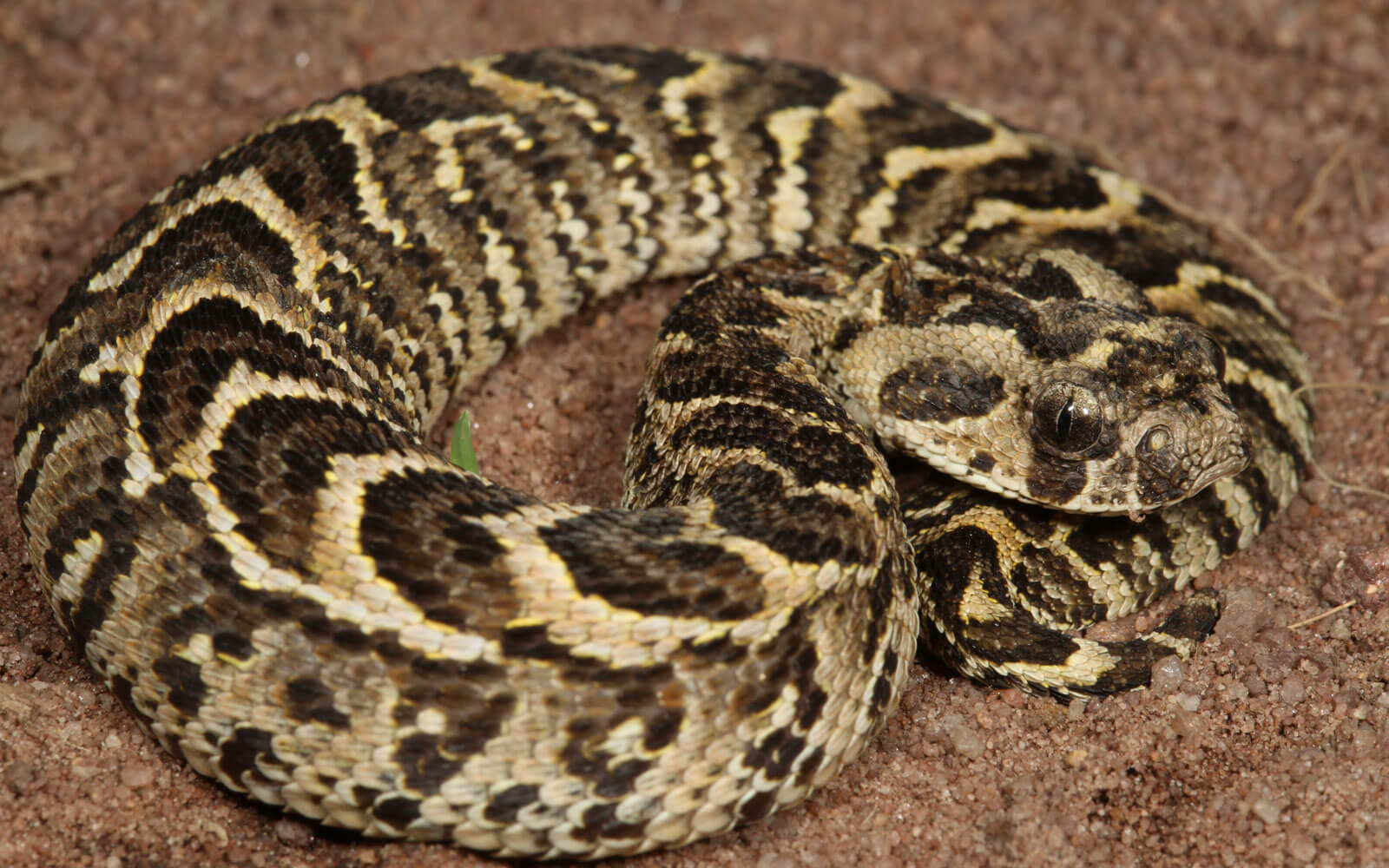 A new-born Puff Adder from Hillcrest

Puff Adders have a potent cytotoxic venom, which can be fatal, although with medical treatment, very rarely is. Symptoms include, pain (a lot of it), swelling of the bitten limb, blistering, bruising/discoloration and tissue damage, which can, in rare instances necessitate amputation. So no, it certainly isn’t one you’d like to be bitten by.

Many bites happen to people who are out walking, and accidentally step on Puff Adders. In the event of a Puff Adder bite, you need to get the patient to a hospital as quickly as possible.
Of course, if you’re out in the mountains, this can be challenging. Being airlifted out is first prize, but that may not always be easy, nor cheap. Keeping the patient as calm as possible helps. Someone in the group could also go and get help at the nearest camp.
Do not use a tourniquet, cut around the bite site, apply ice or heat, or electric shock (the latter sounds obvious, but best I confirm). 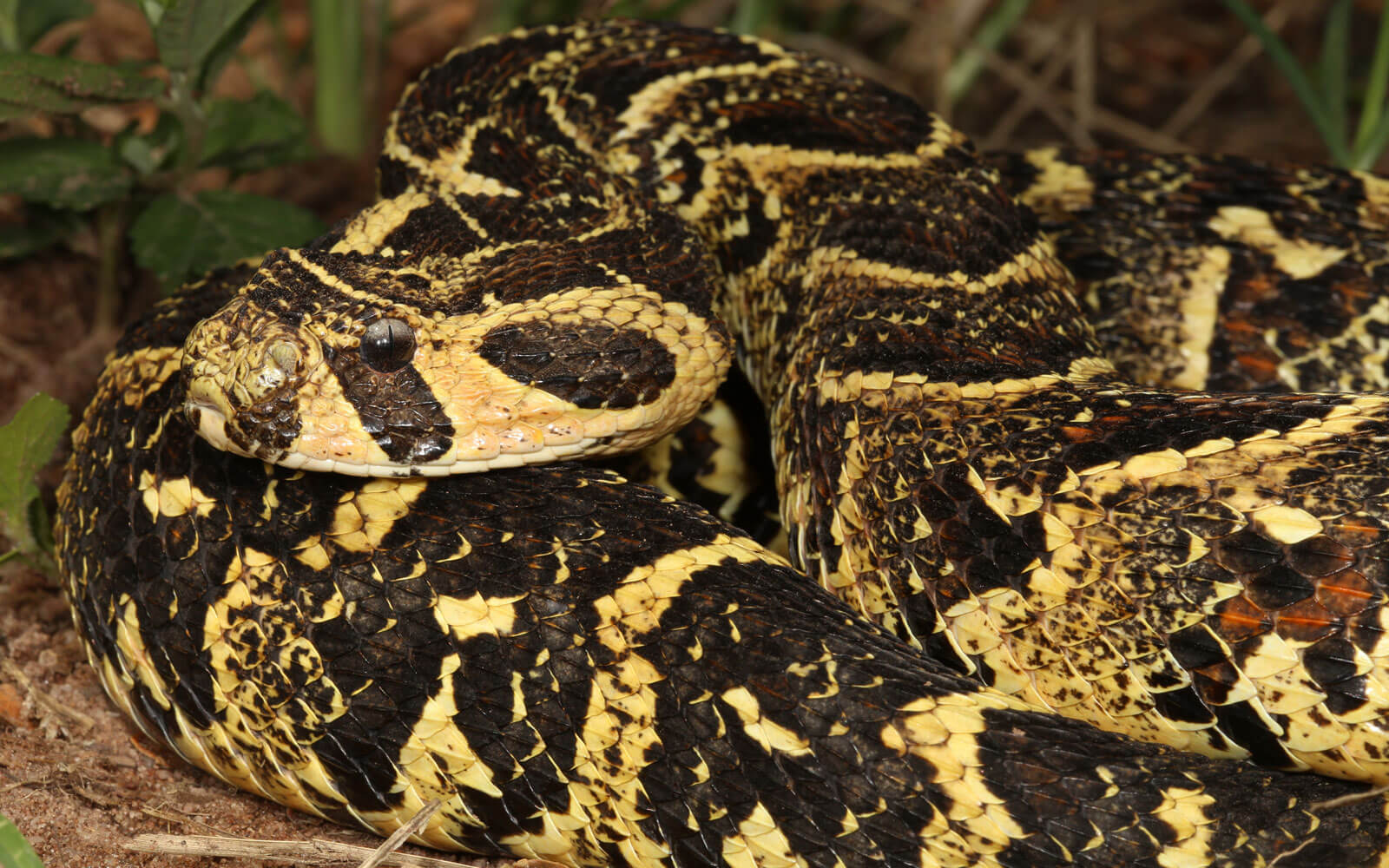 Puff Adders are often referred to as lazy snakes. They most certainly are not! Unlike active-hunting species, such as mambas, cobras etc, Puff Adders choose the ambush method, and wait for their food to come to them.
They feed on rodents, toads, lizards and even birds. Large ones can even take hares. I saw a recent post about one on Facebook recently, an East African specimen, which ate a young antelope! That was exceptional.

Puff Adders will lie in wait along a trail, until something comes along. Then, things get interesting, and deadly. I was recently chatting to my mentor, Professor Graham Alexander, who did a study on the Puff Adders ambushing behaviour. I was blown away at surveillance footage I was shown. 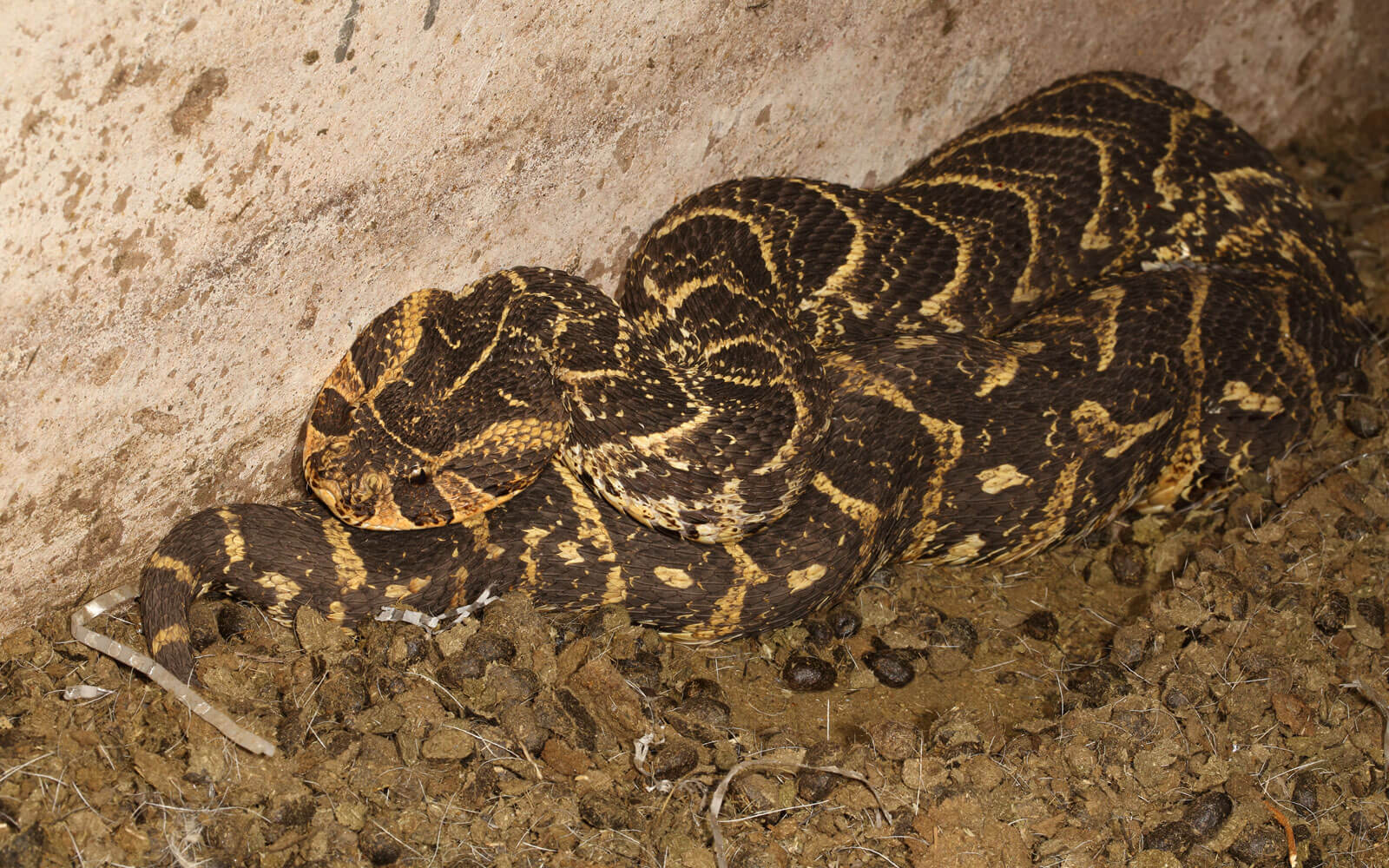 A Puff Adder in a barn, in Cato Ridge

When a rodent comes running past, the Puff Adder keeps dead still, not even flickering its tongue, to prevent giving its position away. As the unsuspecting rodent comes past, it strikes out, bites it, and releases it. The venom does the work, and the rodent doesn’t get very far. Using its forked tongue and great sense of smell, it tracks the dead prey item down.

With birds, the Puff Adder knows if it bites and releases, the bird could fly a bit too far away to track down. So when they strike out at a bird, they hold on, and the venom quickly kills the prey. The same applies to Tree Agamas (aka, Blue-headed Lizards). Instead of letting them run up the tree, the Puff Adder will hold on.

In the case of a toad, the Puff Adder slowly sticks its tongue out, giving the toad the impression that the adders tongue is a worm. A term called ‘lingual luring’. A deadly yet clever trick. This shows us that Puff Adders have excellent vision, and can identify their different prey items.

To read more about the study, which helped us understand Puff Adder feeding behaviour, here are links to two papers.

What feeds on Puff Adders?

The usual suspects such as birds, monitor lizards and small carnivorous mammals regularly feed on Puff Adders. Cobras love them, particularly the Snouted Cobra, which occurs in Northern KZN and other provinces. 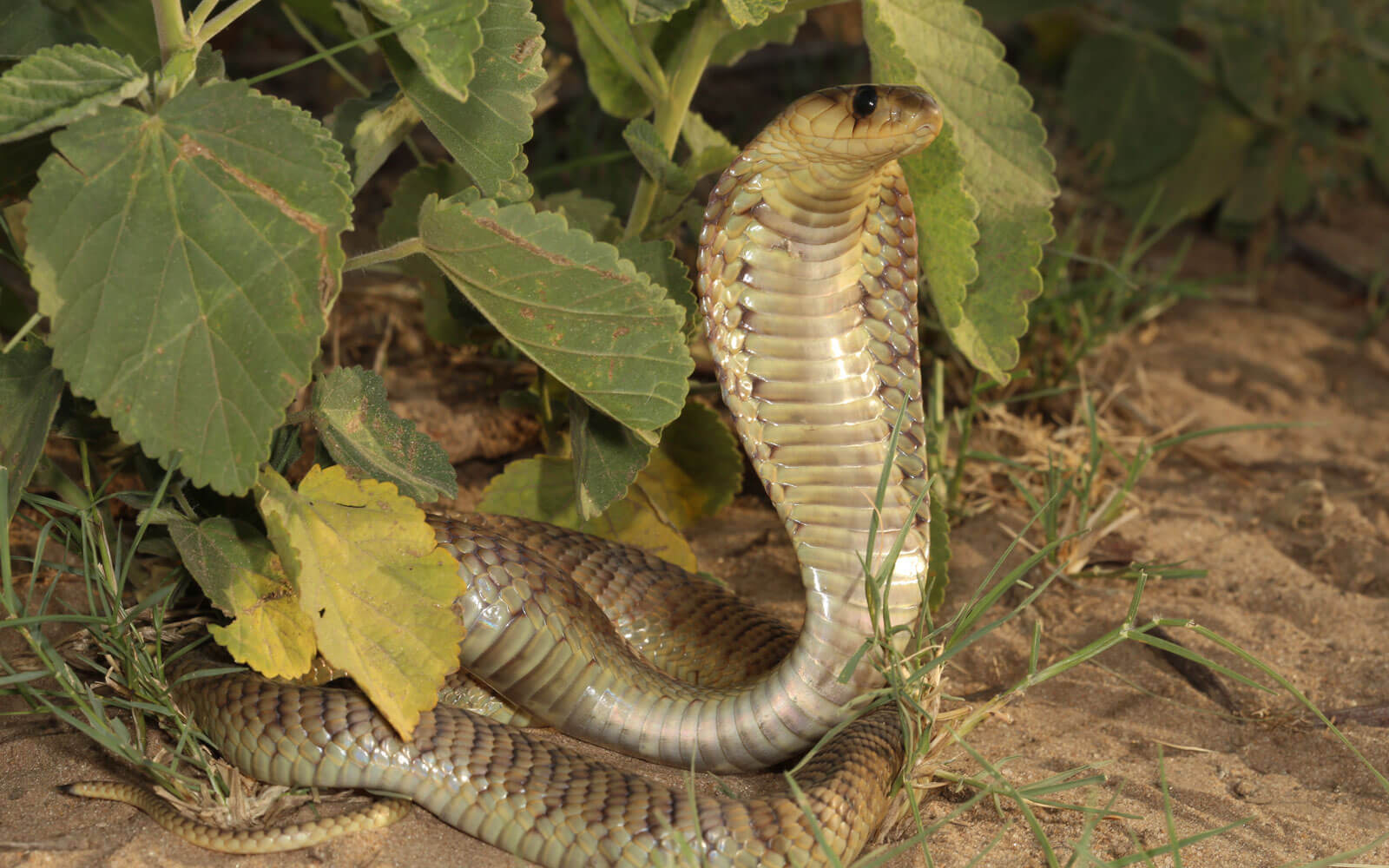 A Snouted Cobra from the Hluhluwe area 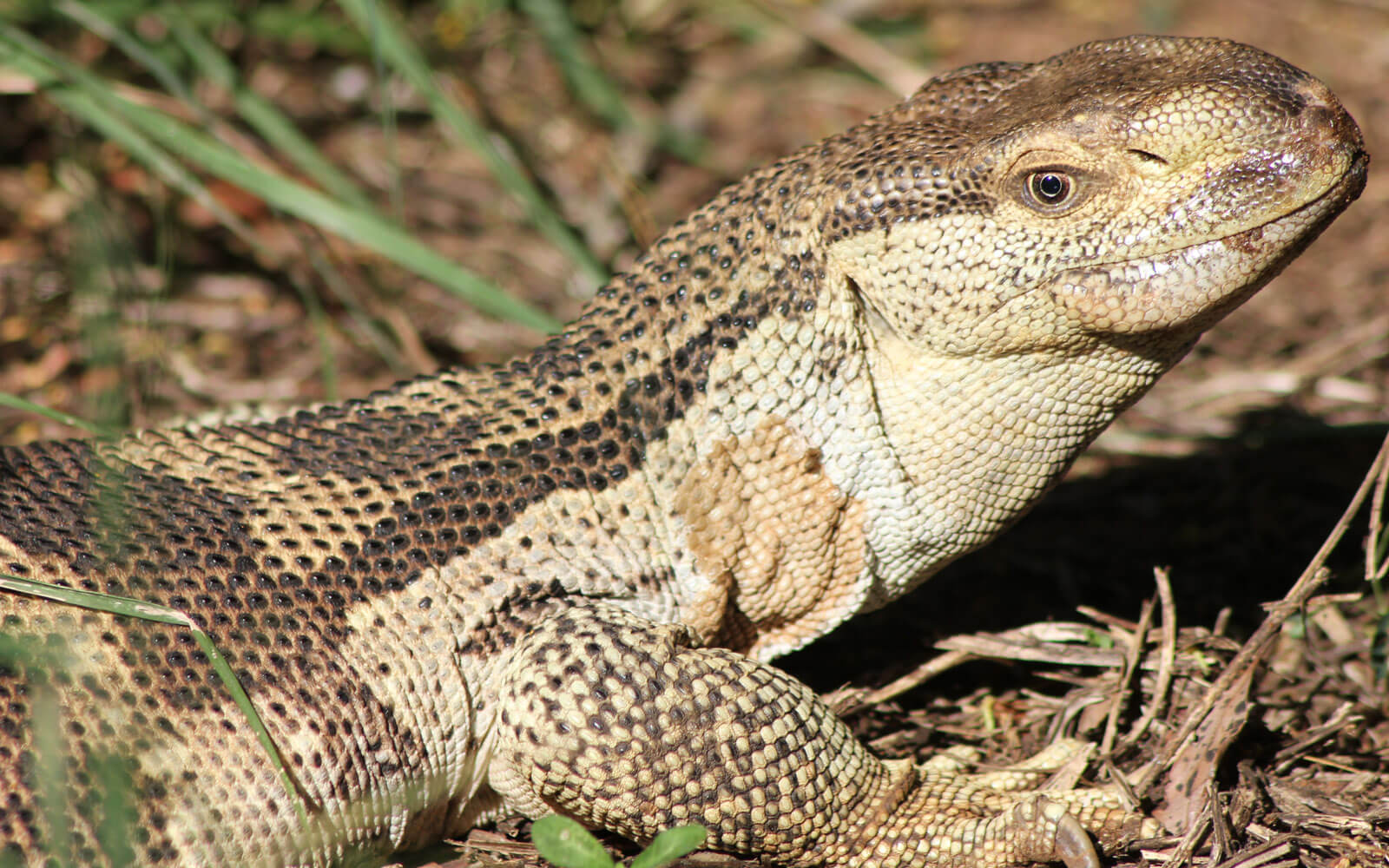 A Rock Monitor Lizard from the Hluhluwe area

Puff Adders aren’t the fastest moving snakes, so if they’re on the move, in the open, and one of their predators spot them, it is likely game over. But, if the Puff Adder is in the ambush position, it does have an incredible way of avoiding becoming lunch.
Puff Adders are one of the only snake species which have no scent. Lying in one place for days or weeks in one place, waiting for food to come past, means that predators could pass by too. Usually, with a keen sense of smell, cobras etc would detect the motionless animal. But not Puff Adders.

A study was done by Wits post-graduate student Ashadee Kay Miller to see if dogs and meerkats could sniff out Puff Adders. While they could detect other snake species, they could not detect Puff Adders.
The full paper, ‘An ambusher’s arsenal: chemical crypsis in the puff adder (Bitis arietans)’, by Ashadee Kay Miller, Bryan Maritz, Shannon McKay, Xavier Glaudas and Graham J. Alexander, can be found on the Royal Society Publishing website.

Now, next time someone thinks of a Puff Adder as a lazy or even a boring snake, you can tell them otherwise! These are one of my favourite snakes around. They’re truly fascinating, and just have an awe about them. I wish I saw more of them.

Special thanks to Professor Graham Alexander, from Wits University, for corrections and input in this article. 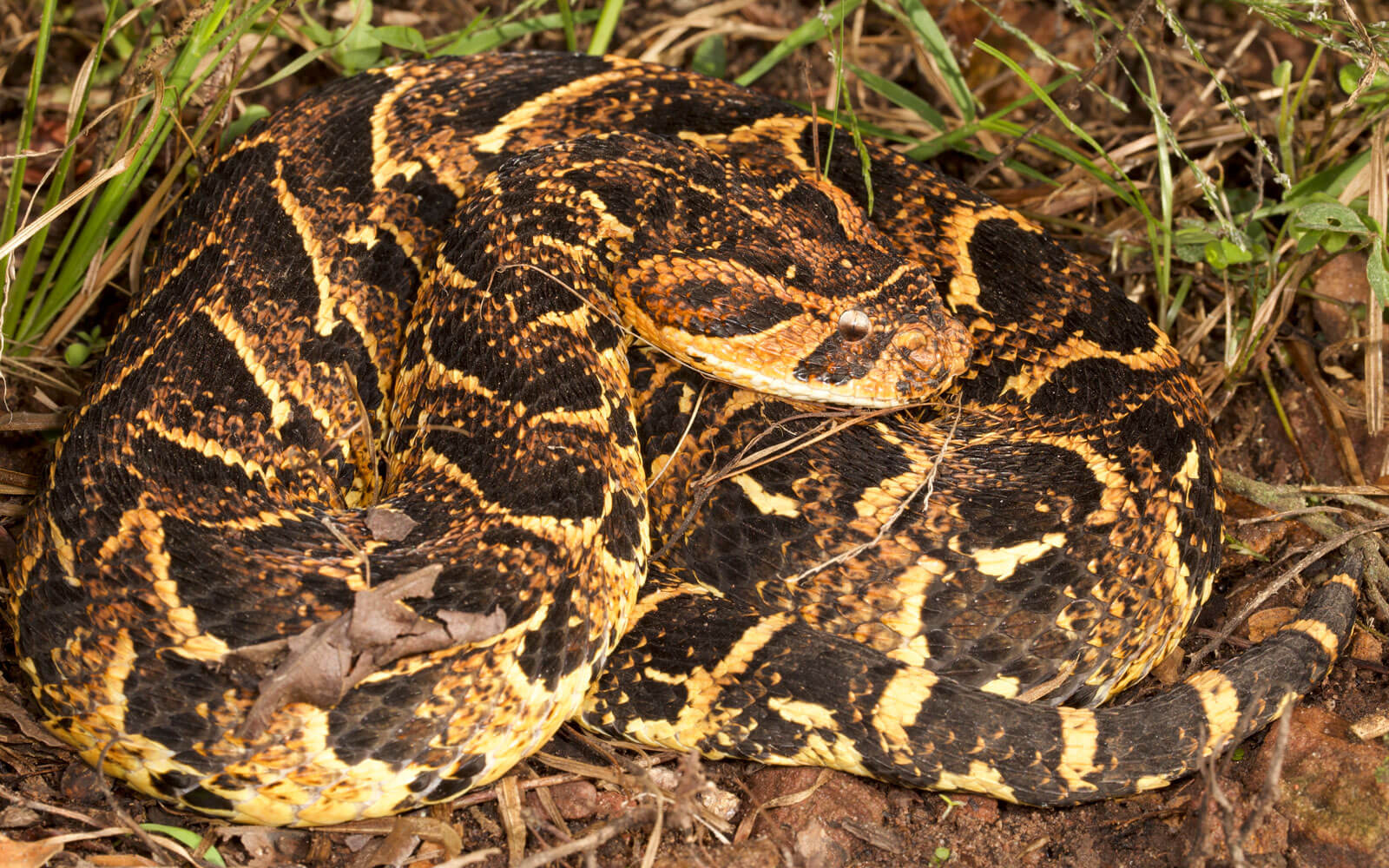 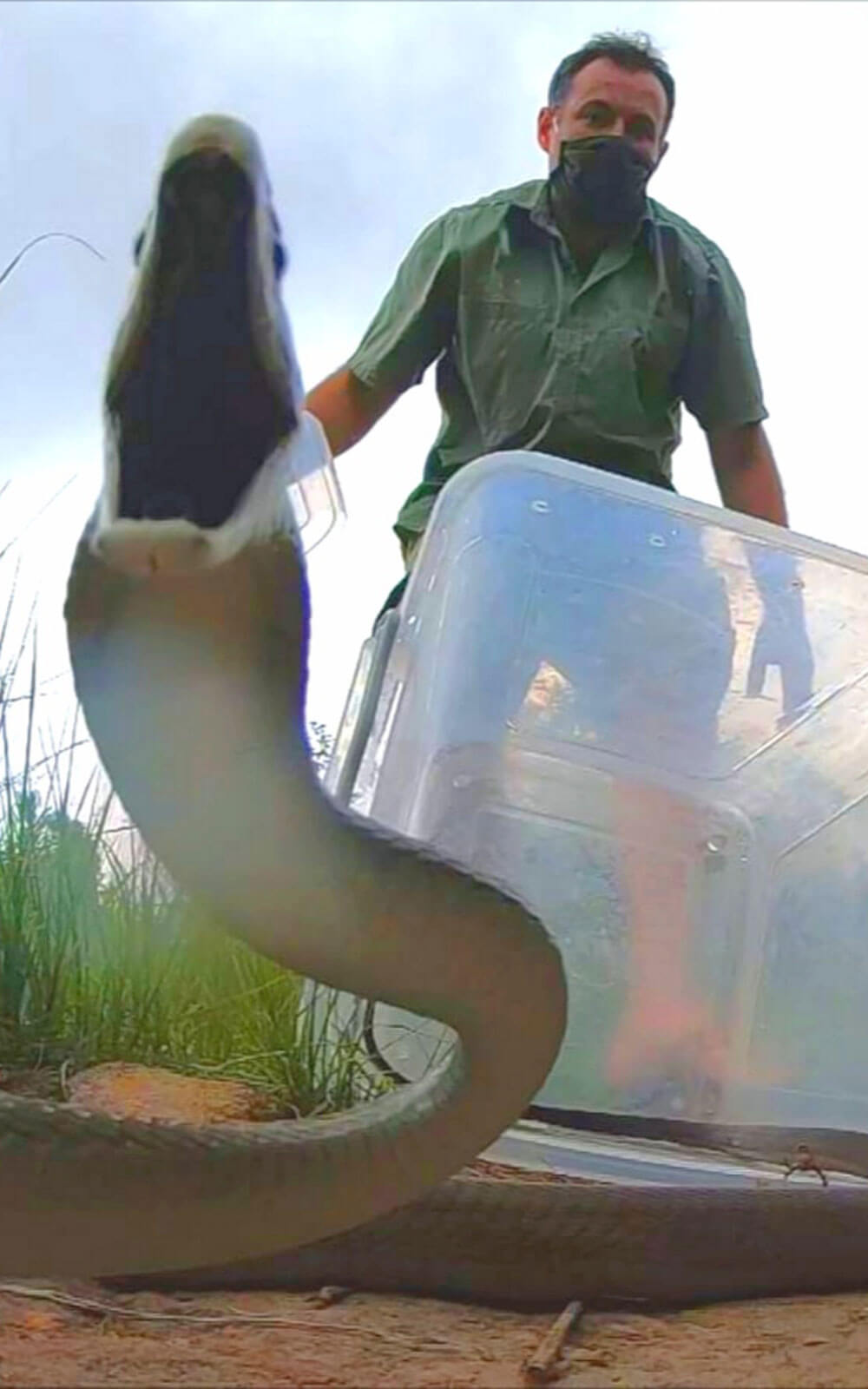 Nick Evans runs KZN Amphibian & Reptile Conservation. He spends most of his time teaching people about snakes across the province, and removing unwanted snakes from homes in the Greater Durban Area. But he has always had a love for chameleons, and spends many evenings looking for them, whether it’s just for ‘fun’ or whether its to survey populations. You can also watch Nick in the series “Snake Season” on People’s Weather (DStv 180 and Openview 115).