What are they, and how different are they from other snakes?

Although not all snakes are venomous, those featured in this article are, and they fall within the large family Colubridae. In addition to having pointed snake teeth in the upper and lower jaws, they have elongated ‘fangs’, situated midway along the upper jaw, just below the eye, hence the label back-fanged. 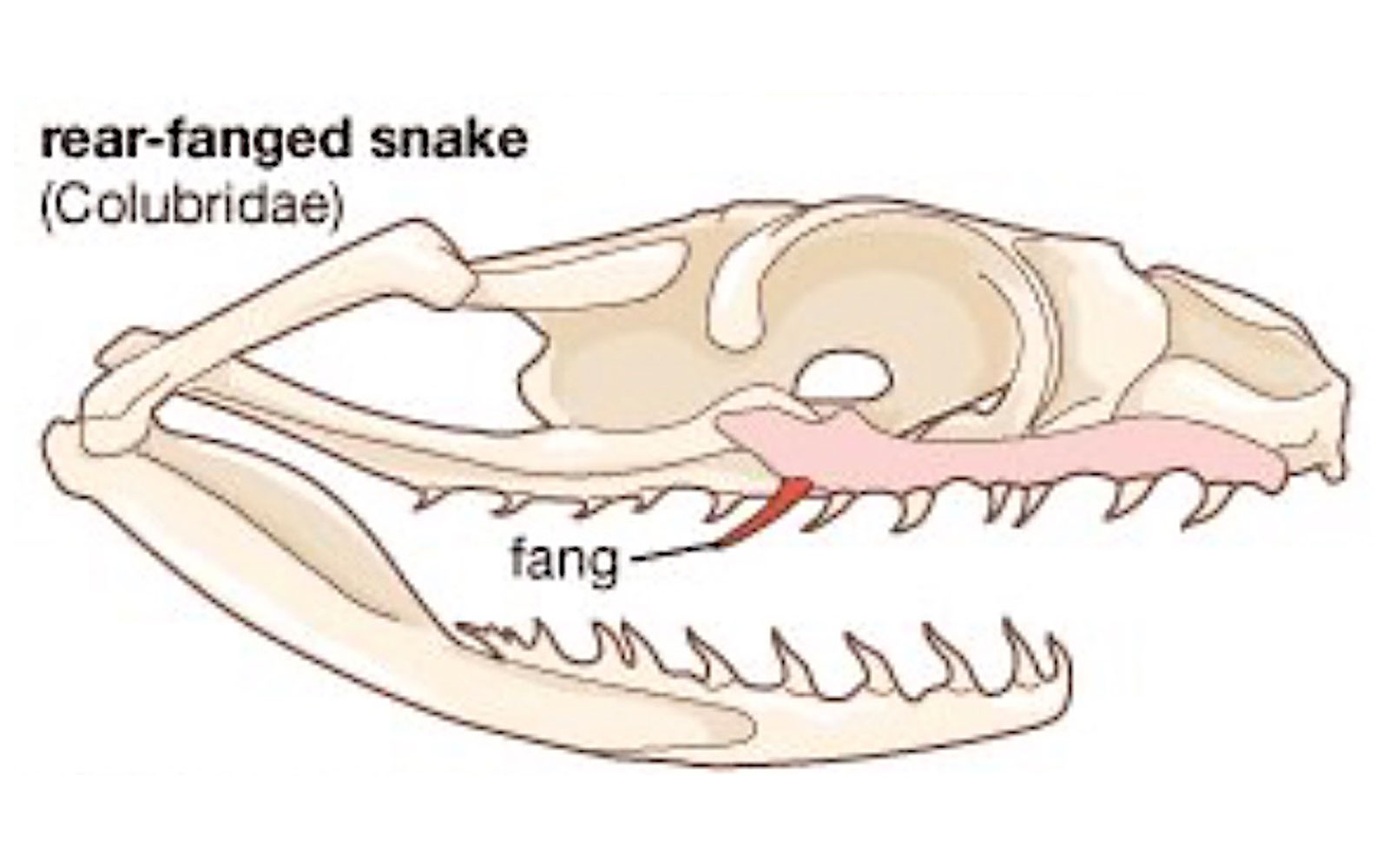 These fangs are longitudinally grooved to aid the flow (not injection) of venom produced by a small gland behind the eye (Duvernoy’s), into the bite wound. They are termed opistoglyphous snakes, a large multi-species group that includes for example, our Boomslang, Vine snake, Herald and Tiger snake. 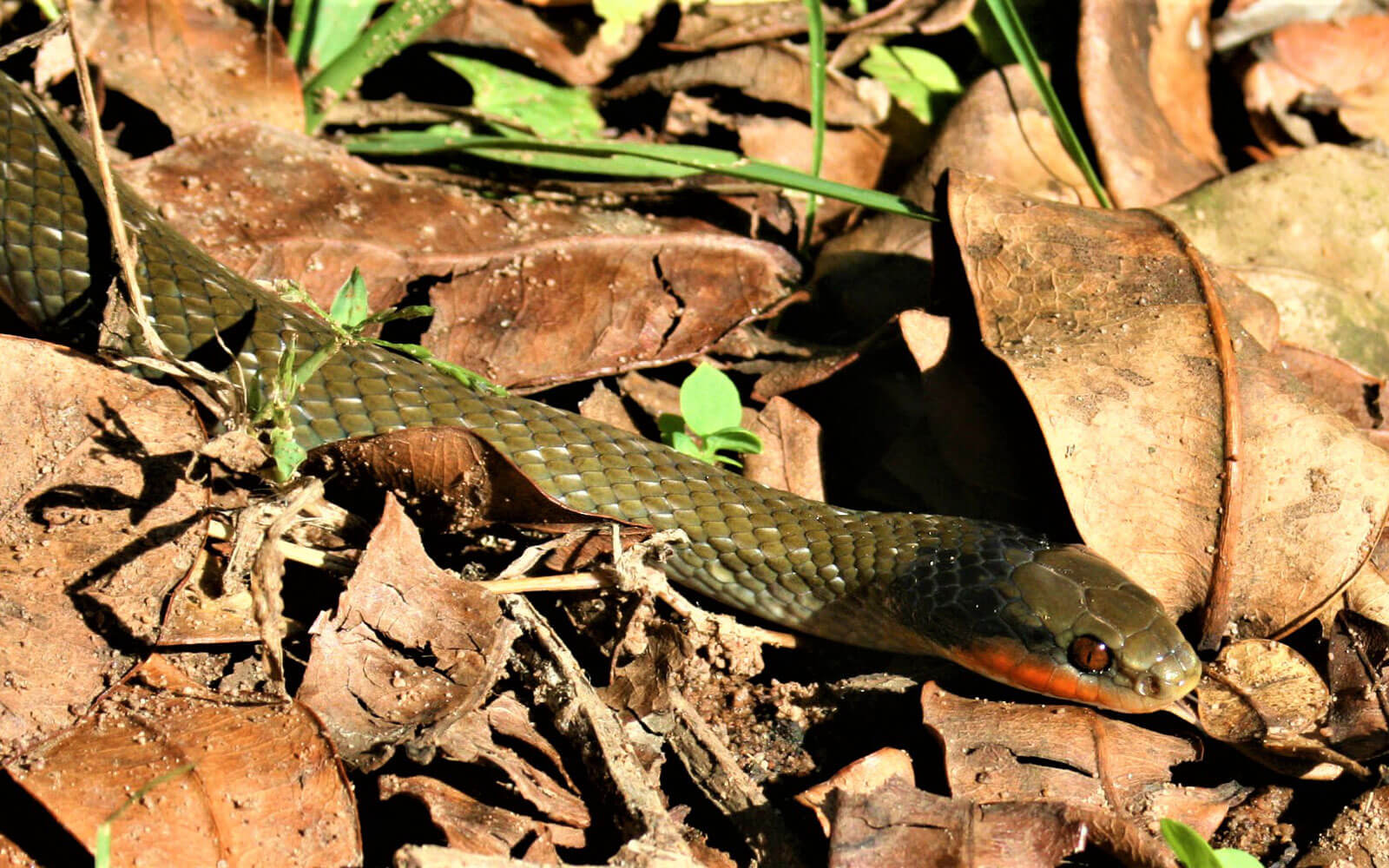 Eastern Tiger snake. A close cousin of the Herald.

Despite the saying ‘a snake is a snake’, they’re different. Promise. To get an idea of where the venomous snakes fit in the snake world, we’ll need to consider the dentition in the various categories, a defining factor in their allocation within the order Squamata. 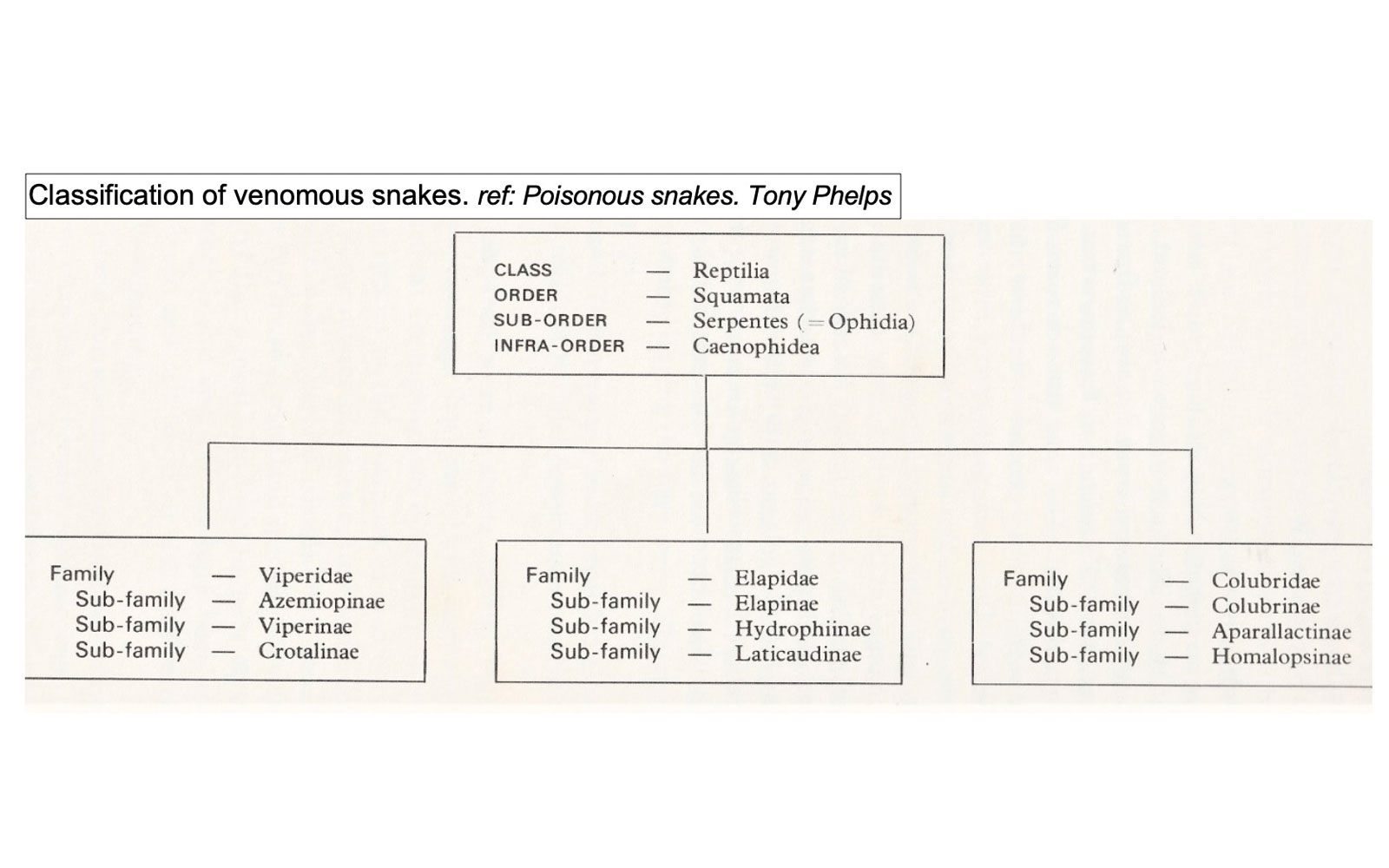 Aside from the non-venomous snakes – those with no defined venom producing glands – we have our back-fanged ones, followed by the front fanged snakes, which inject their venom, produced by a specialised gland, considerably larger than Duvernoy’s. Whether venomous or not, all snakes produce digestive enzymes.

Venom. What is it?

To put venom into perspective, we need to accept the fact that just about anything that eats anything else, requires some form of digestive enzyme (saliva) to speed up digestion. Human digestive juices are potent, more dangerous than the venom of many venomous snakes, certainly if inserted into an open wound on another creature. Even a non-venomous snake, a brown house snake for example, must produce saliva to lubricate the flow of its food item into the stomach, where the digestion of this food is in turn accelerated by the same saliva. No matter what we call it, this saliva is a form of venom. 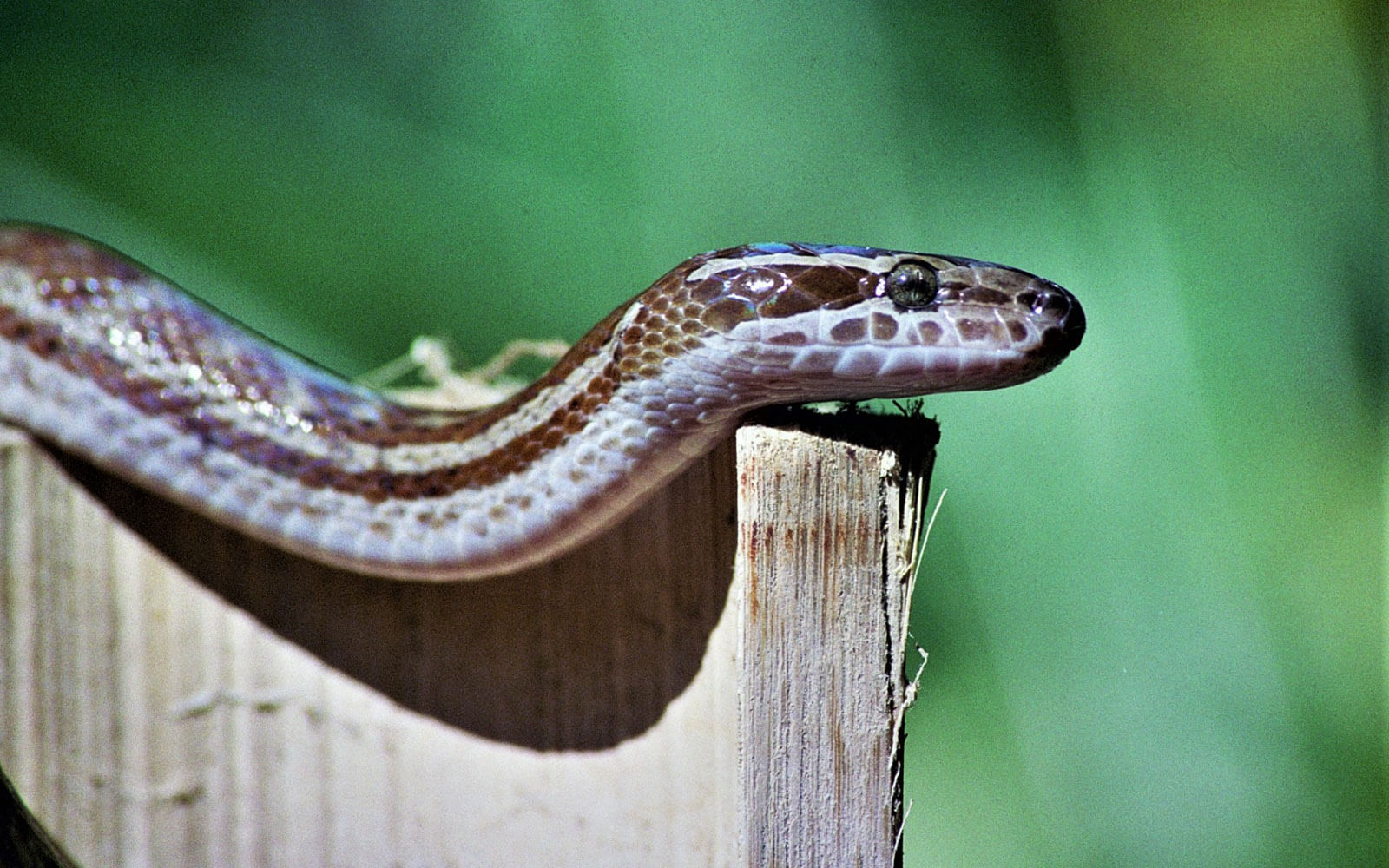 Sorry to do this to you, but I’m of the opinion that as intelligent readers you’re reasonably up to speed on how the body operates, so I’ll mention it. If so inclined, a glance into the toilet bowl after your regular morning ‘movement’, would put you in the picture. It will reveal what your digestive juices (venom) have done in a matter of hours to that beautifully presented Filet Mignon you dined upon the previous evening. Powerful stuff.

How do they fit in? 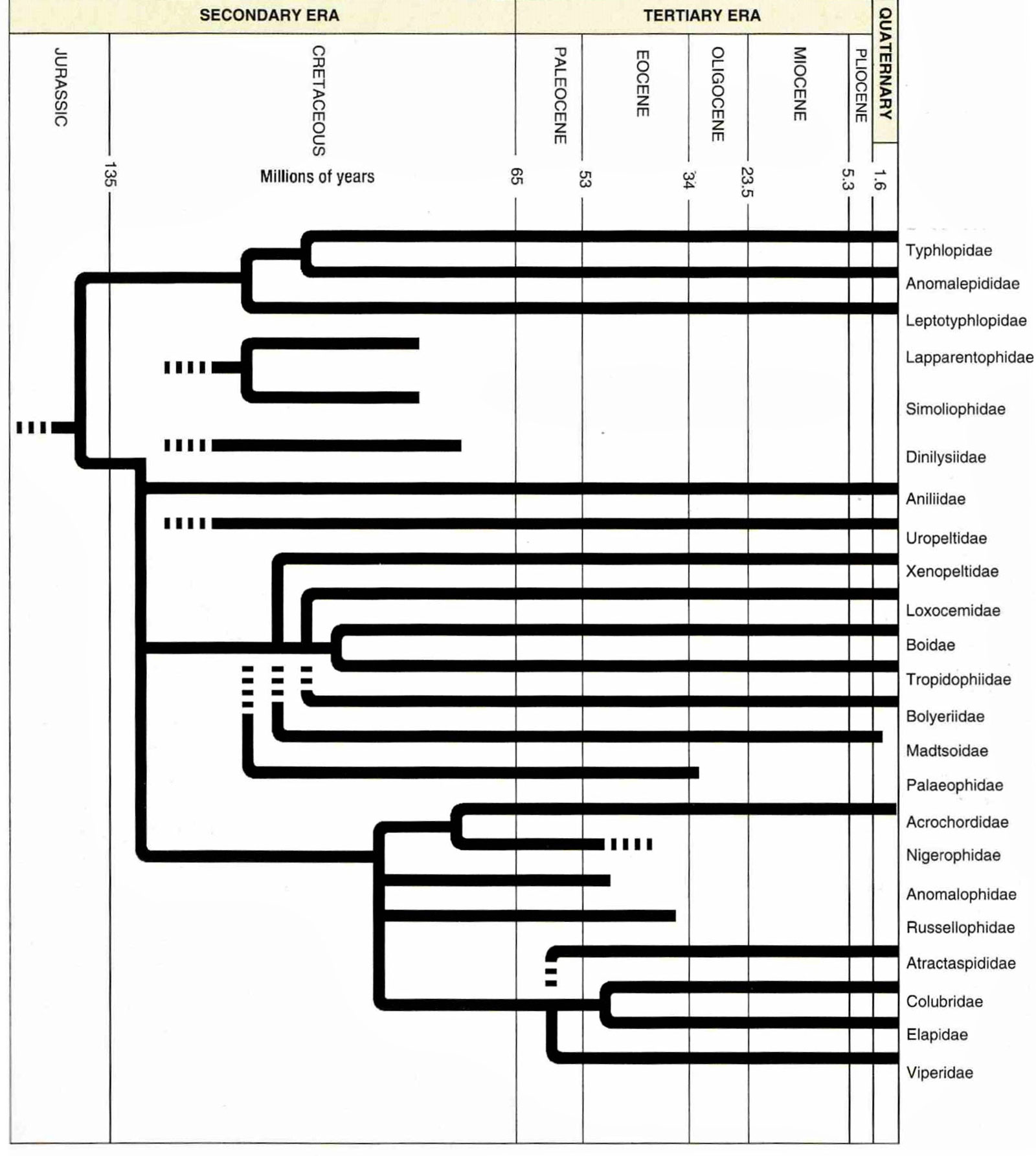 They’re the largest family in the sub order Ophidia (snakes) with over 1500 species. They’re what are termed the true snakes, and within this classification we’ll find most of the snakes that fall into this overview, the venomous back-fanged snakes. The study of snakes goes back many centuries and has become more complex as time has moved on, and scientists have continued to rearrange the furniture as they uncover more information. My take on the subject is based more on my experiences with snakes and their behaviour, along with access to the volumes of recorded – sometimes contradictory – input from many differently skilled experts, and even to this day, things are changing – not with the snakes which have remained what they’ve always been – but with the fine-tuning on the minutiae as more and more information is garnered and different snakes are for numerous reasons, being re-allocated to different groups. For this exercise we’ll stick with the basics.

I’d like you to think back to those days when, panic stricken, upon seeing a green snake in the rafters, we’d either scream, or perhaps whisper (because we thought they could hear us), “MAMBA!! Runnnn!!!!“ whilst simultaneously hurtling off in the other direction, with arms flapping wildly – or if you were brave enough – grabbing at the nearest suitable weapon with which to mindlessly beat a poor Spotted bush snake to death.

Hopefully, we’re beginning to acquire a more reasoned understanding, and that’s where we’re going now, to try and clear away some more of the fear inducing hearsay. Any queries or interesting comments on the subject would be welcomed, please share them, there’s still so much we don’t know. Much of our knowledge of most things, comes from such input.

Most snakes need teeth to assist with their feeding and/or defence and are born with them in various configurations. These are fixed to the outer surface of the jawbone, rather than within a socket as is the case with mammals, and are regularly replaced either because of damage, or during the shedding process. For the purposes of this article, apart from the back-fanged opistoglyphous snakes, the following additional dental configurations can be found within the snake order. 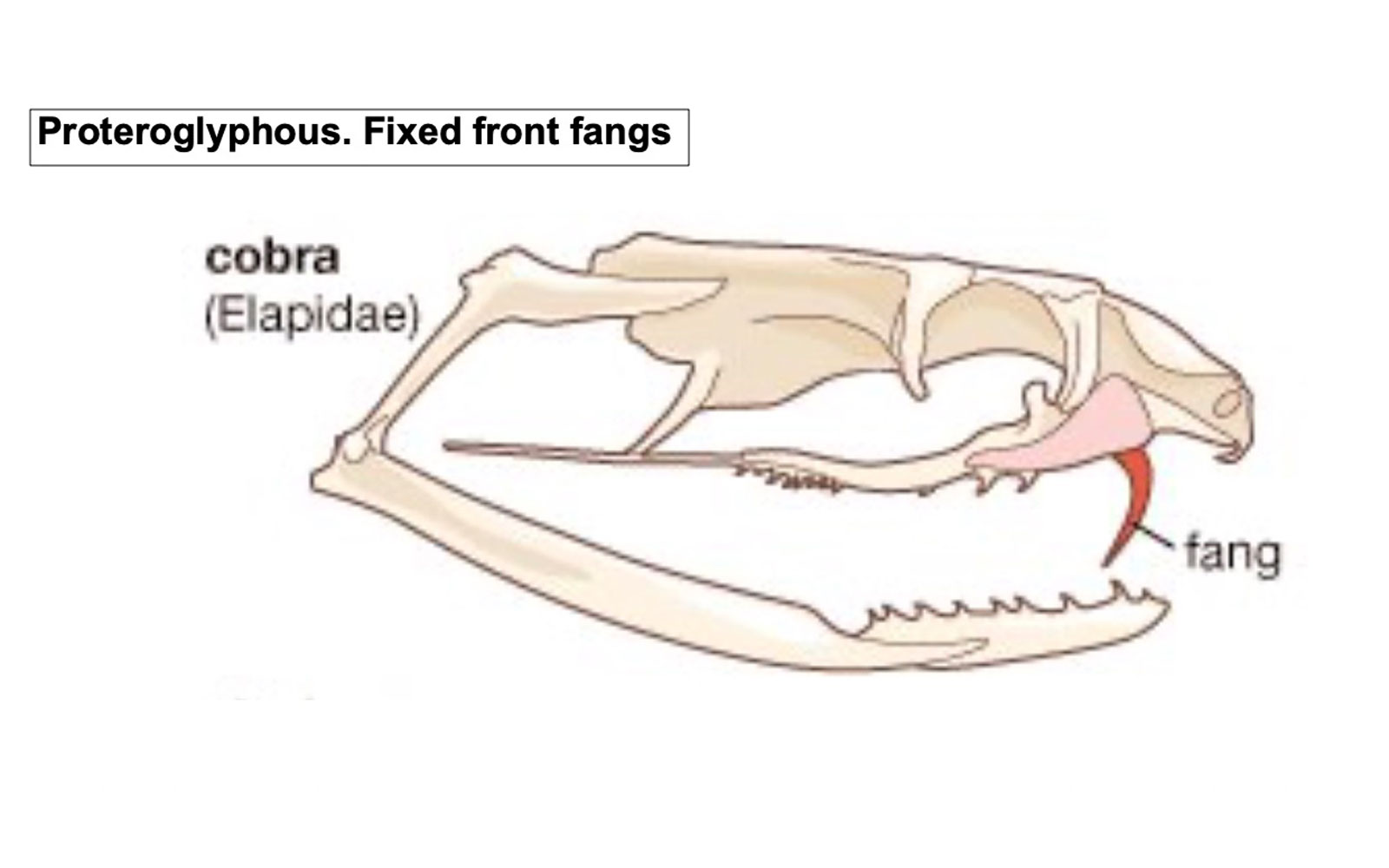 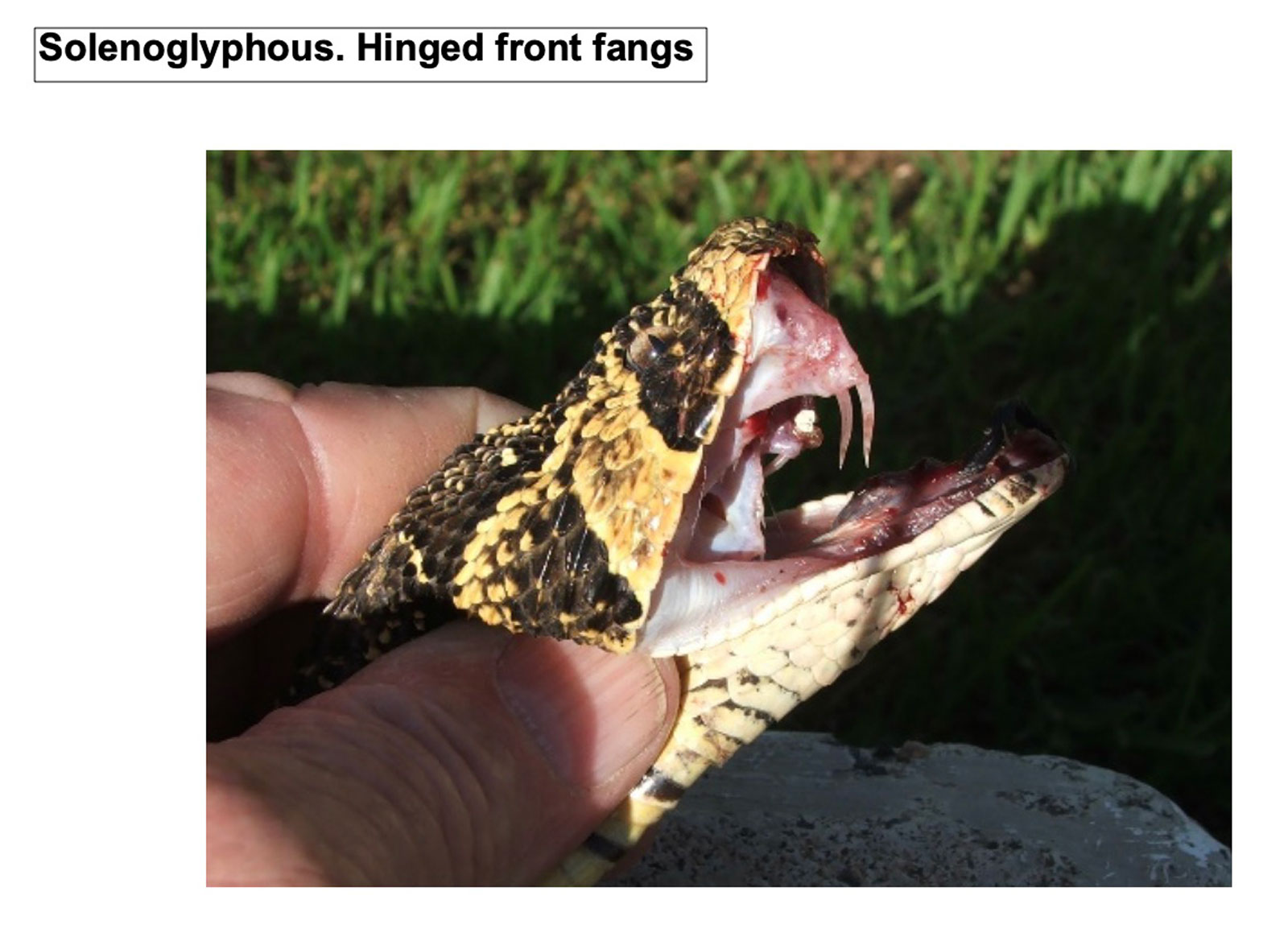 Why do some have rear fangs?

Try as hard as I might, I cannot think of, nor find, a specific reason why some snakes have back fangs and others not. Nature is not renowned for giving creatures appendages and abilities that are superfluous to requirement, so there must be a reason. All snakes must eat, and as they don’t masticate their food, those that need teeth to procure their prey are born with the necessary weaponry. The addition of venom to the saliva already produced in the mouth of any snake is presumably related to the type of food they will hunt and eat. Man wasn’t around when snakes arrived, so I doubt we would have been factored into nature’s calculations when venom was designed, and as the different venoms vary considerably in composition and purpose, I find it hard to accept that the allocation of a specific type of venom to an individual species was a random choice.

There used to be an assumption that rear-fanged snakes were less venomous than the front-fanged snakes, but as was discovered in the early 1900’s, Boomslang and Vine snake venom was considerably more potent than at first thought. The potency of Skaapsteker venom, as well as that of many other back-fanged snakes remains in question or is still vaguely understood because of the low reportage of bites or reactions to bites from these types of snake. 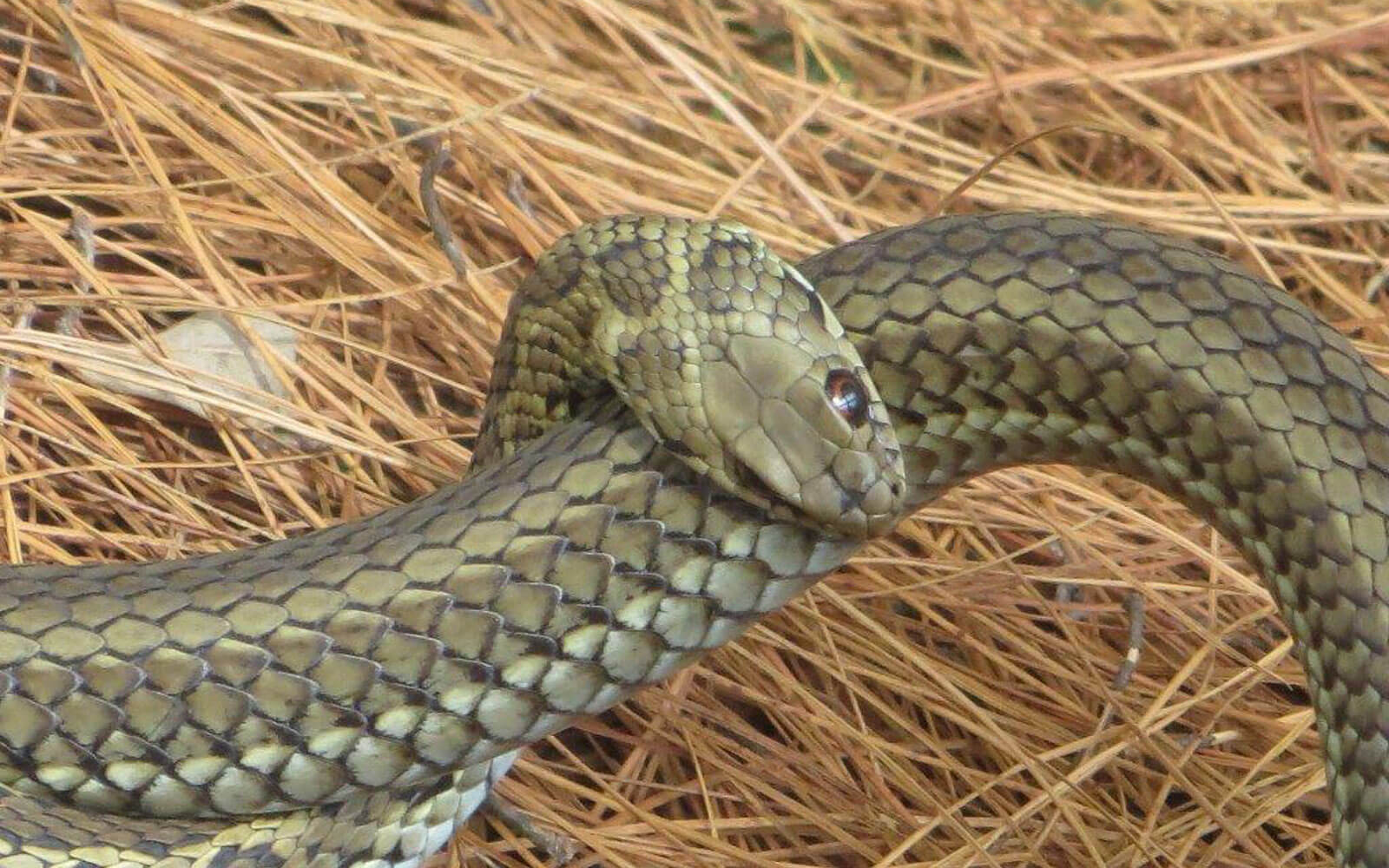 Boomslang and Vine snakes are predominantly arboreal (tree living) hunters, and the bulk of their food consists of such things as bird eggs, nestlings, tree frogs, and chameleons, none of which could be classed as physically dangerous or difficult to subdue from the snakes point of view. The Skaapsteker which although not arboreal, prefers lizards, also not renowned for their potential to kill their attacker. Therefore, although requiring an extra weapon (venom) to help speed up the killing and digesting process, they presumably didn’t need a strike and release type of potency such as that of the front fanged snakes, proteroglyphous and solenoglyphous, which would normally feed upon larger, more dangerous or escape-prone prey. Perhaps the venom produced by Duvernoy’s gland does not have the same ability to immobilise the prey as rapidly as that produced by the true venom glands of the front or hinged-fang snakes.

It’s a fallacy that back fanged snakes have to strike twice in order to inject venom, and although people assume that all back-fanged snakes need to chew onto their victim in order to insert venom, that is not entirely correct. I can attest to that having had ‘snap bites’ or side swipes from back-fanged species during a capture or handling process, occasionally experiencing obvious reactions to the venom, such as localised bruising or excessive bleeding at the site of the bite. Some back-fanged snakes have a very small gape, making it difficult for them to strike and bite down onto any victim in one action, which is why they specialise in a food type preference where that can be easily achieved (e.g. although not a colubrid, the relatively miniscule Centipede eater), but venom from larger back-fanged snakes, including Boomslang and Vine snakes, can be delivered anywhere on the human body, in a single strike. 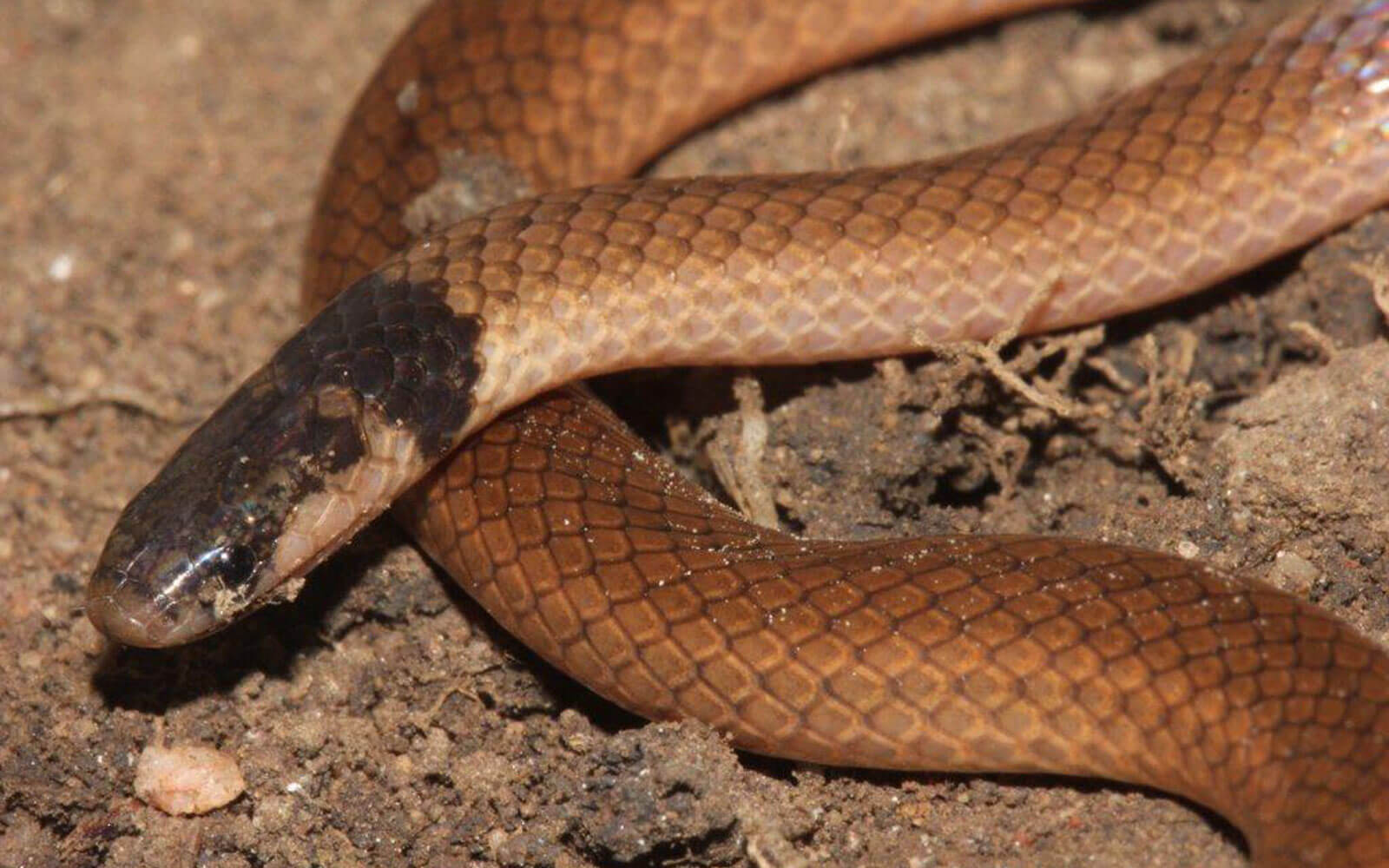 The chewing down by the back-fanged snakes is essentially a way in which the snake can enlarge the penetration area to allow for a greater flow of venom into the wound. Fortunately for most victims, the speed at which a reaction to envenomation by a back-fanged snake takes place, is nowhere near as fast as that required for bites from elapids, Mamba and Cobra. Until someone comes up with a rational explanation, I’ll continue guessing. 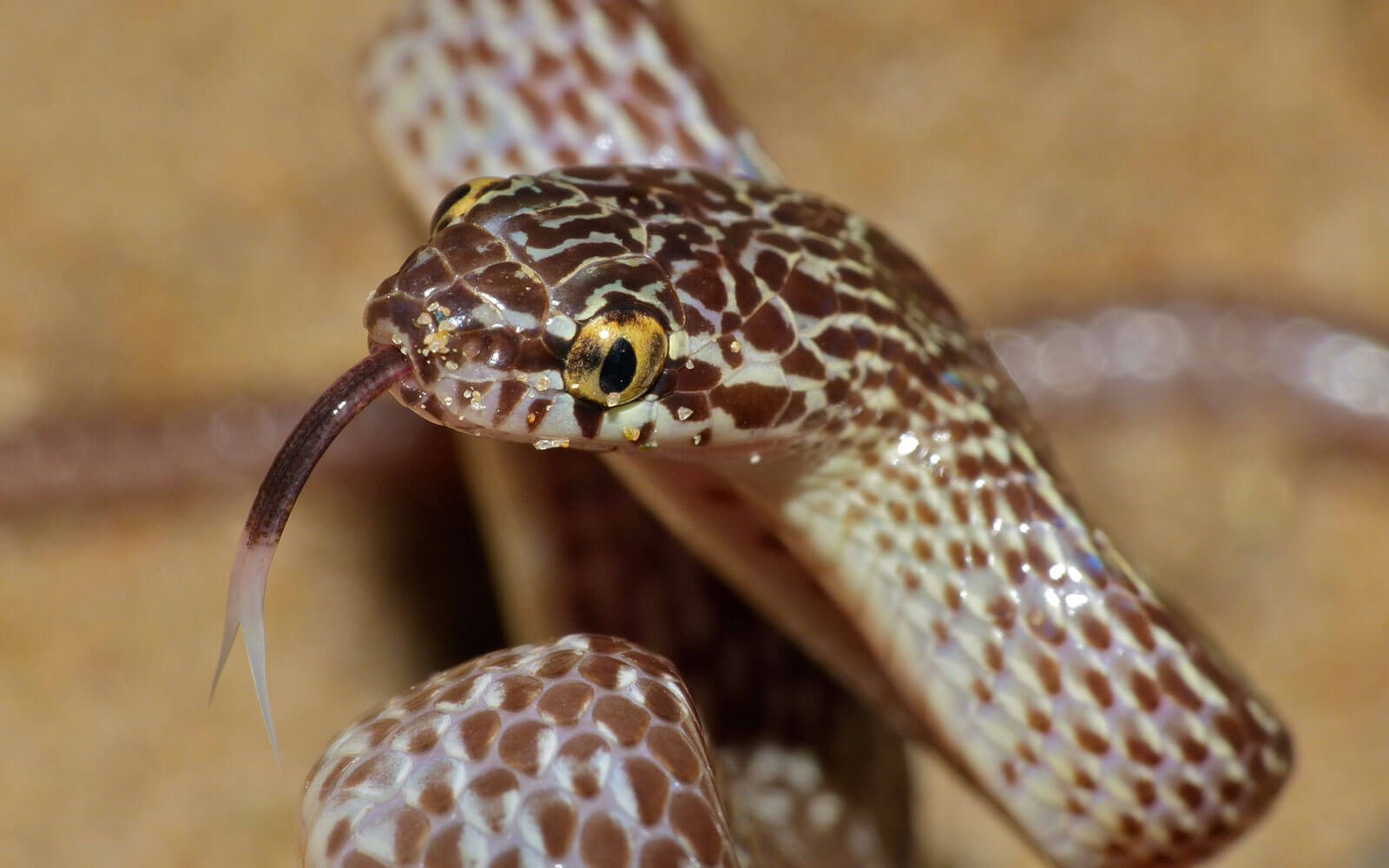 Some of our common Highway opistoglyphous snakes 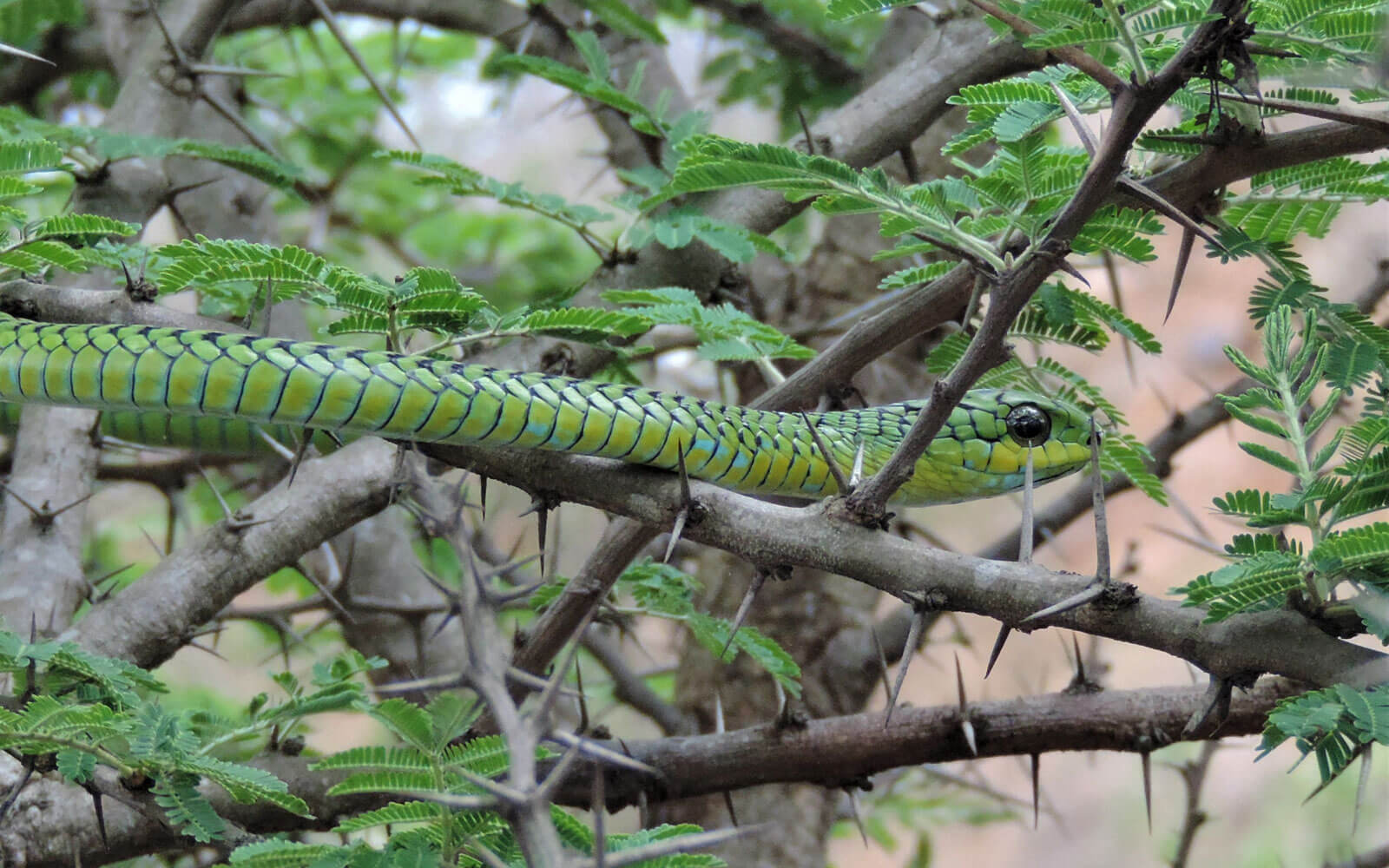 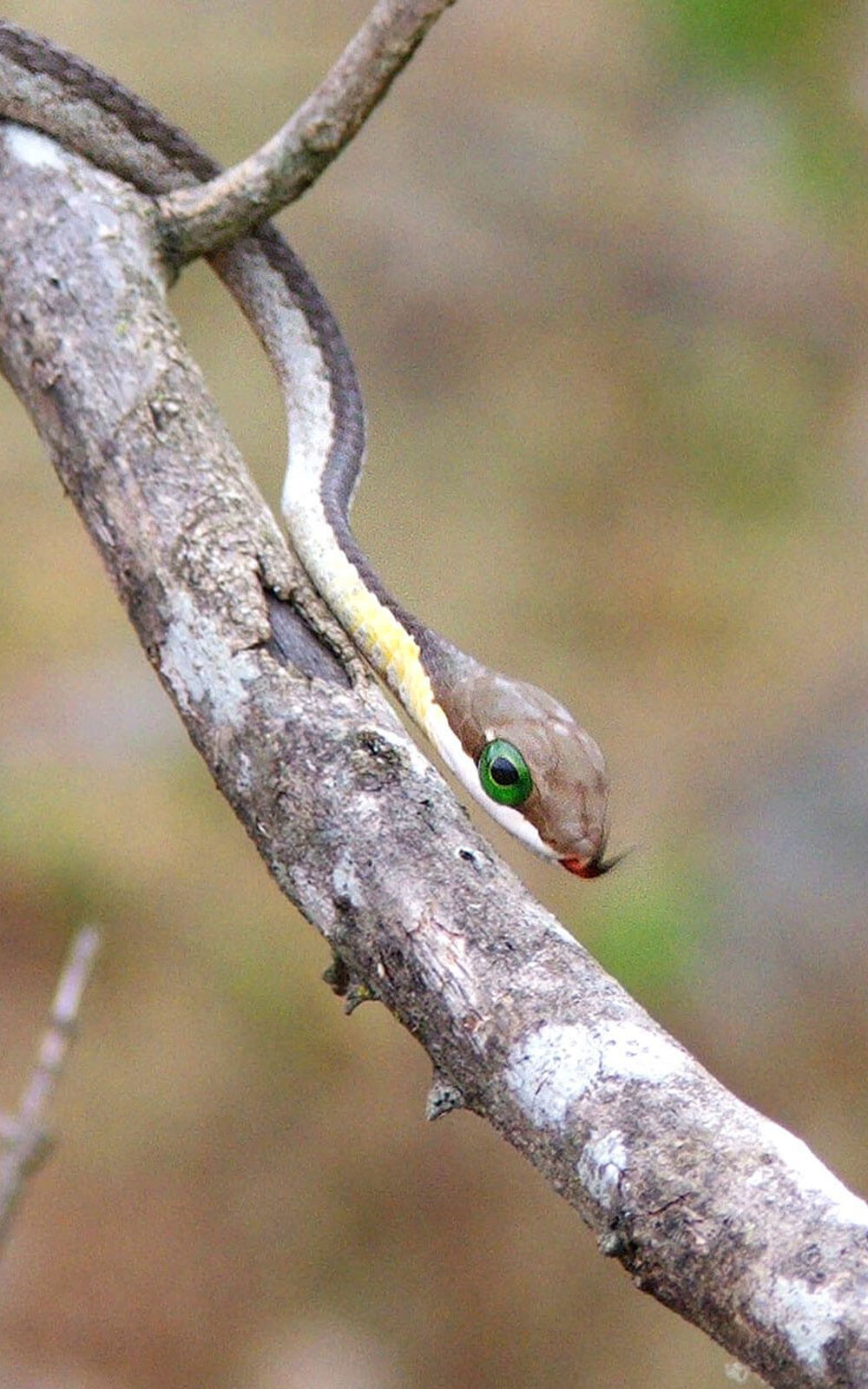 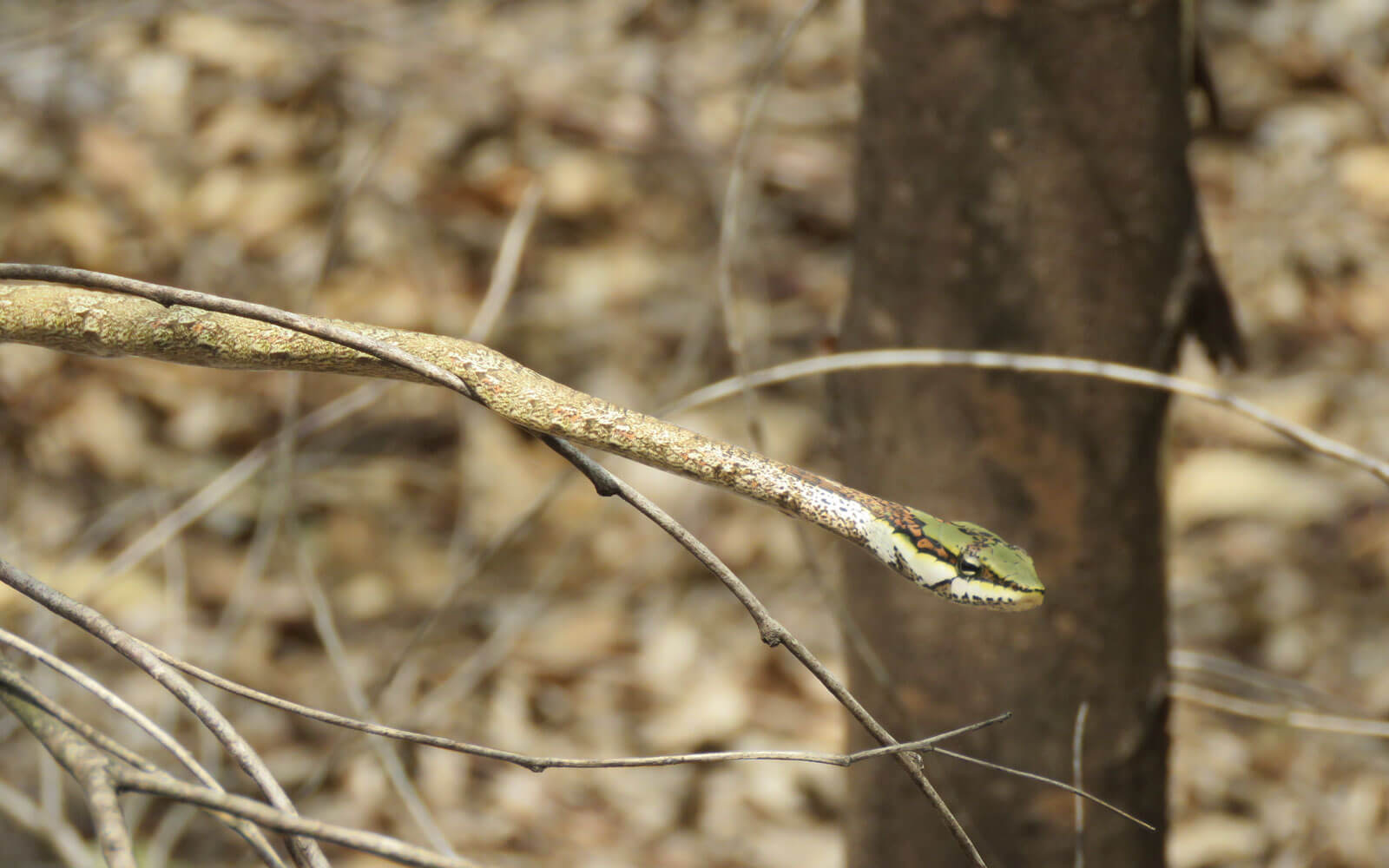 We have chatted about these fascinating arboreals previously, and if you ever get the opportunity to witness one in action, consider yourself fortunate. Whether they’re stalking chameleons, robbing the pigeon loft or a Weaver’s nest, the birds will usually alert you to their presence. To record any hunt and capture would be special, and listen carefully, this can help you to interpret different bird calls for future reference. Without getting in the way, use a decent pair of binoculars and try to locate the snake.

Watch carefully and you’ll be amazed at how each animal operates in such a situation. Like the neighbourhood watch, the birds will literally gang-up on the snake. The parents, supportive Cape White-eyes and Sunbirds on the nearby branches, Bulbuls and Shrikes a branch higher, and the Starlings at the top, calling the shots. The snake, if it’s got what it wanted – a nestling or an egg – will do its best to avoid conflict and flee. There are no free lunches in nature, neither party will give up easily. Please remember, you are watching nature in action, so do not interfere, no matter how much you love the little birdies. 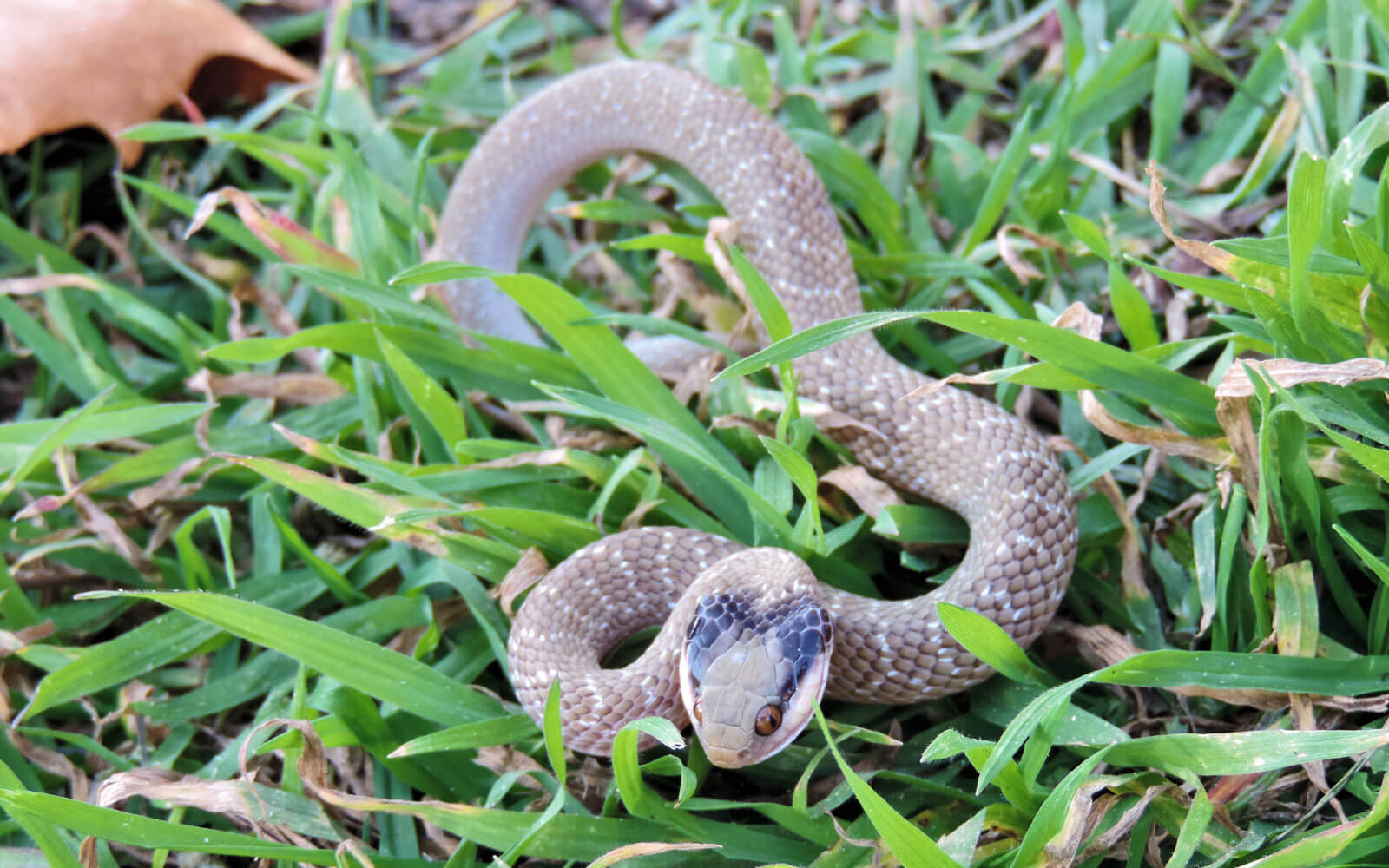 Heralds are strong competitors when it comes to hunting the guttural toads in the back yard after dark. Whenever I ask during a talk, if anybody has ever been bitten by a snake, up go the hands, “Herald!”, come the responses from the audience, all vying for the ‘Hero of the Evening’ award, and all claiming to have suffered a headache as a result. 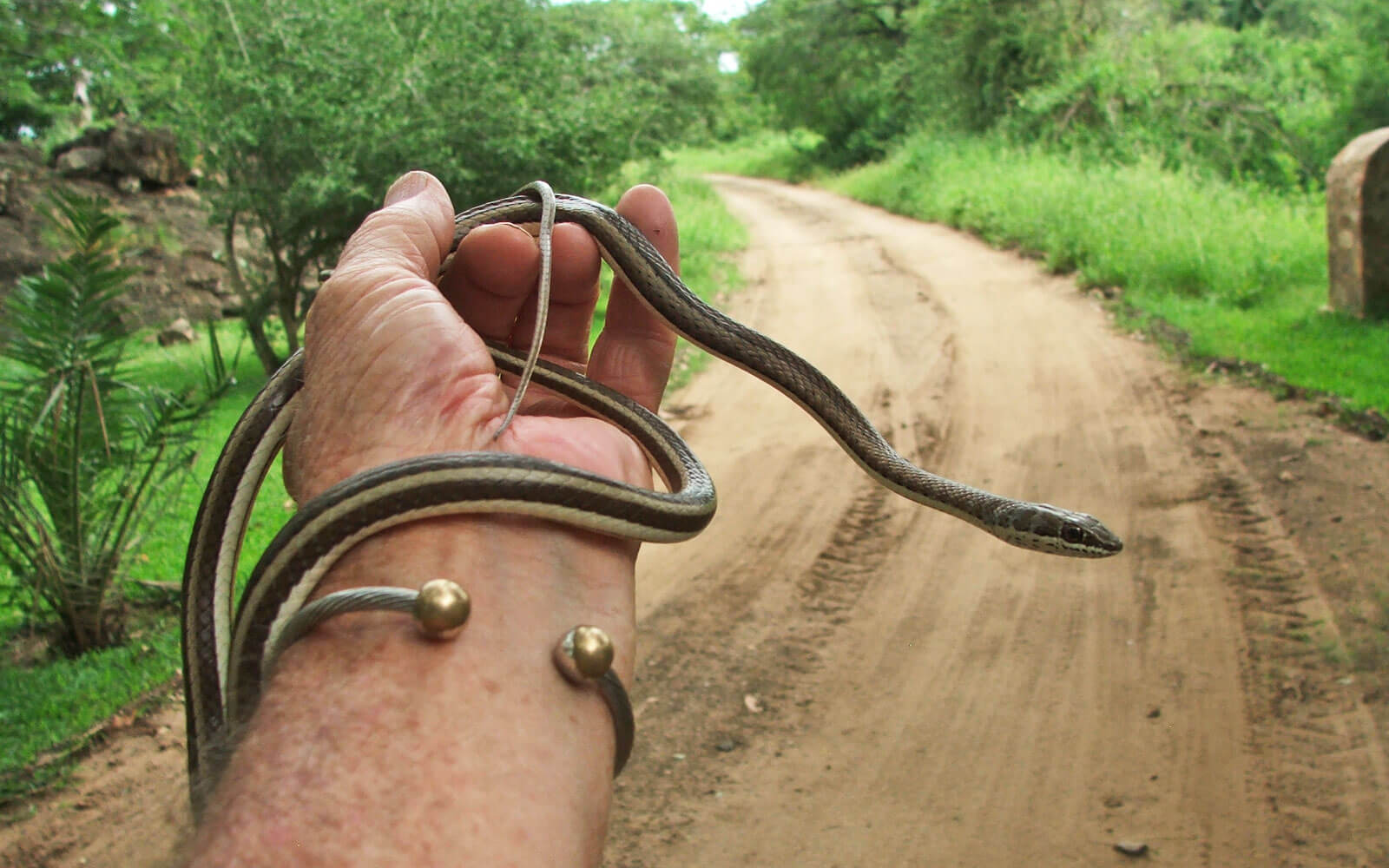 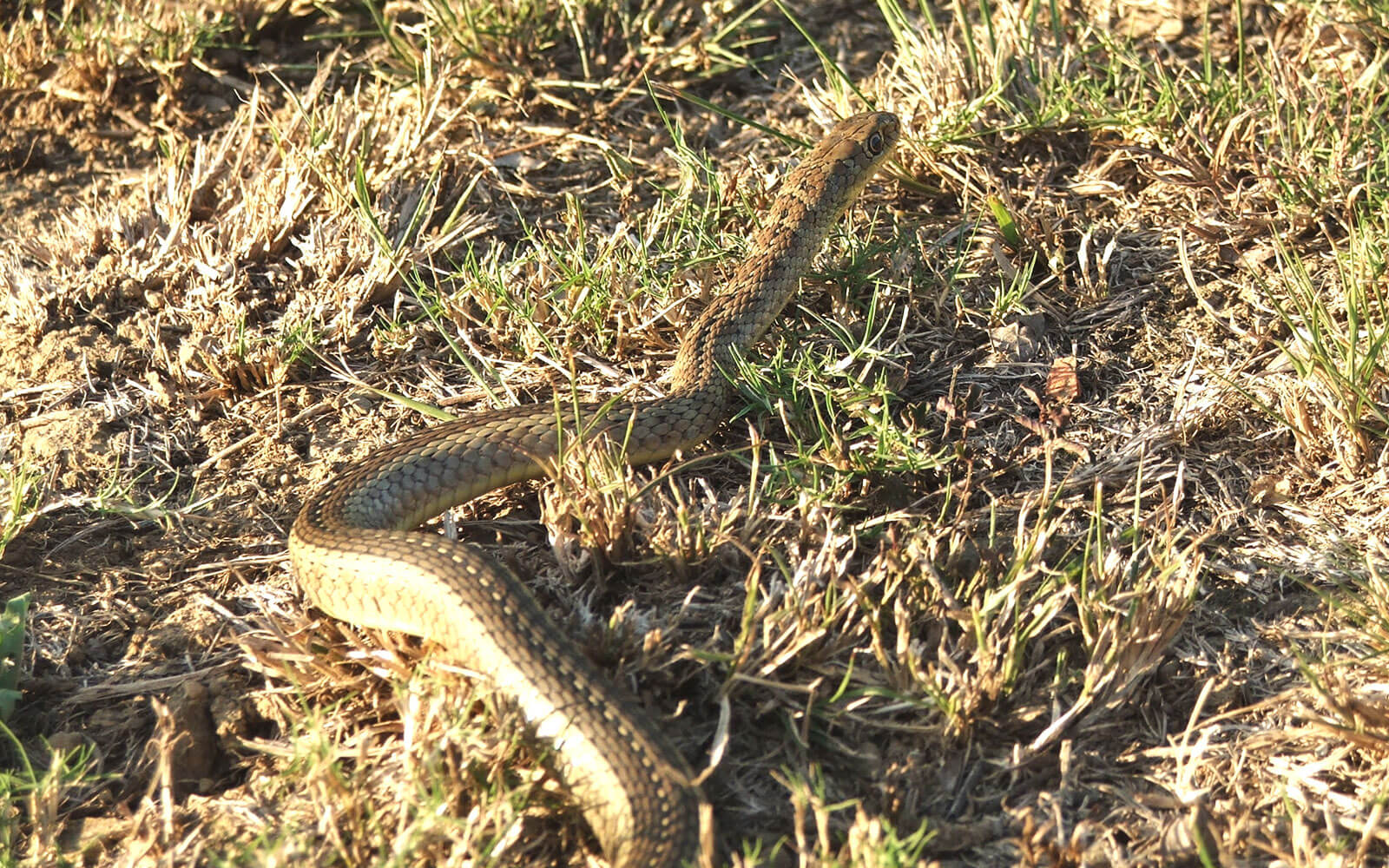 The diagnostic stitch line on the Short snouted sand snake

Sand and grass snakes are common but seldom seen. These cryptically camouflaged foragers course through the veld grasses and scrub, head high, looking for lizards, birds, rodents and whatever else might be around. If alerted to your presence, the illusive masters of hide-and-seek will immediately go to ground and remain motionless, as you thrash around aimlessly, in the surrounding bush, panga at the ready!

Do yourself a favour. Get into nature. Pat was born in the UK, educated and brought up in Rhodesia/Zimbabwe, and came to South Africa in 1983. He developed an early interest in the study of the behavioural aspects of insects and animals, rather than the deeper scientific side, and he’s worked with snakes for most of his life. Pat conducts educational walks and talks throughout SA and into neighbouring countries where snakes are grossly misunderstood and needlessly killed. He writes articles for a number of publications, and has written the book ‘Getting to Know the Neighbours’, which is all about understanding snake behaviour and is aimed at teaching others how to come to terms with them.

Pat can be contacted at: herpet@eastcoast.co.za.