South Africa is home to a wide array of snakes, with KwaZulu-Natal being the most species-rich province. And in the Krantzkloof Nature Reserve, there are a number of interesting species, some venomous, most not. One of the most special snakes to see, deep in the gorge, would be South Africa’s largest snake- the Southern African Python (Python natalensis). 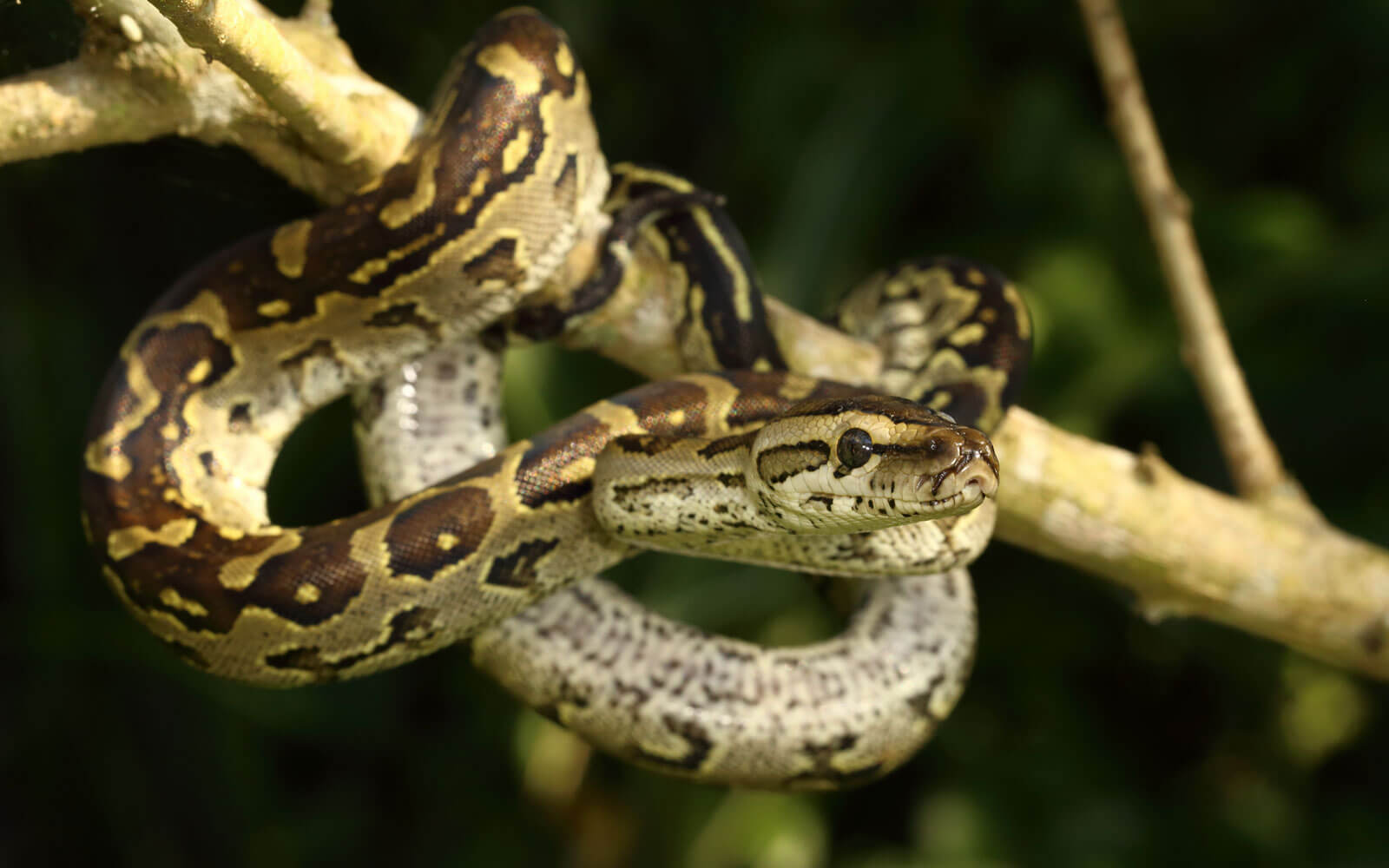 The Southern African Python can reach impressive lengths of five meters or more, and can weigh over sixty kilograms. How I wish to see a specimen at that size! Sadly, such giants are very rare, especially anywhere near suburbia. Last year, I was fortunate enough to rescue a four meter specimen on Link Road in Waterfall, whom was just under four meters long and who weighed thirty-one kilograms. A python crossing that busy road, in a suburb, was just bizarre!

The average adult size of the pythons I rescue is three to three and a half meters in length, with a handful being around the four meter mark.

Juvenile pythons spend a lot of time in trees, away from danger, and will feed on birds, bats and rodents. Adults, well, their diet consists of quite a lot! Small mammals, such as small-medium antelope, and even monkeys have been recorded as prey. They’ll also take other reptiles too, such as small crocodiles and adult monitor lizards. In areas where there’s many people, such as Inanda, they’ll mostly feed on livestock, especially chickens. Pythons love some KFC! 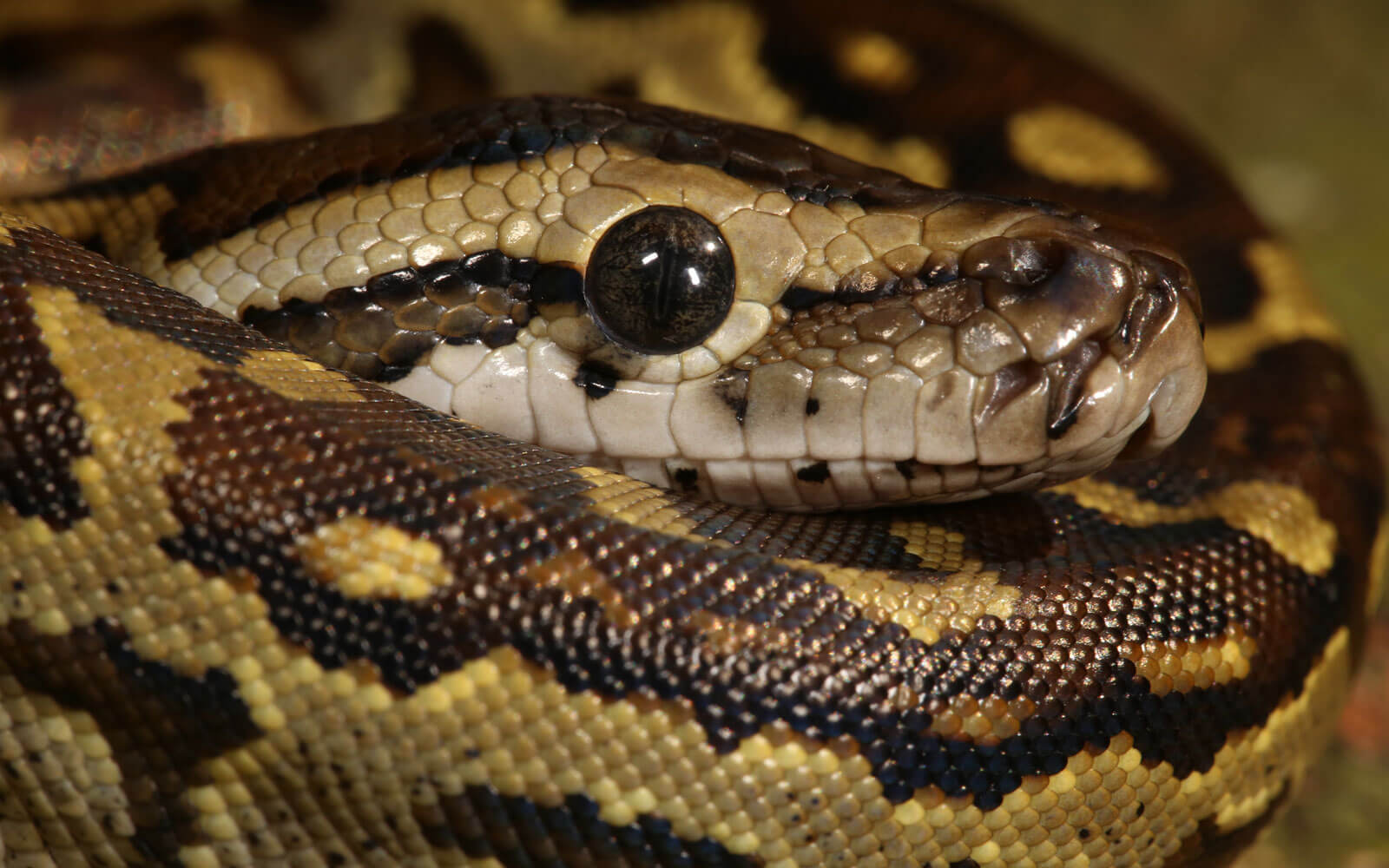 Should we fear pythons?

Unfortunately, the movie ‘Anaconda’ has not done the python’s reputation any good. Many people are terrified of even 2.5m specimens eating children, which just won’t happen.

There are records of Southern African Pythons devouring what I presume were children, but there hasn’t been a proven case in a long time.

Should you be somewhere in the bush, or maybe even deep, down in the gorge, and you happen to spot a large python basking in the sun, don’t panic. It will not come slithering towards you. It will most likely disappear in a few seconds. For your sake, I hope it doesn’t – well, not immediately. Take a minute or ten to enjoy the sighting. Seeing a large python is a special, and pretty rare sight. Snap a photo if you can. If you send me a photo of a python in Krantzkloof I’ll be both very interested and very jealous!

Do not ever try to capture or kill a python. Firstly, it is illegal to kill them, and one can face a hefty fine. It is also illegal to capture it without a permit. It is a protected species.

Also, a python can defend itself. They have rows of needle-like teeth, which are a little like fishing hooks. If you mess with a python, and it turns and latches onto you, you will be in a lot of pain! 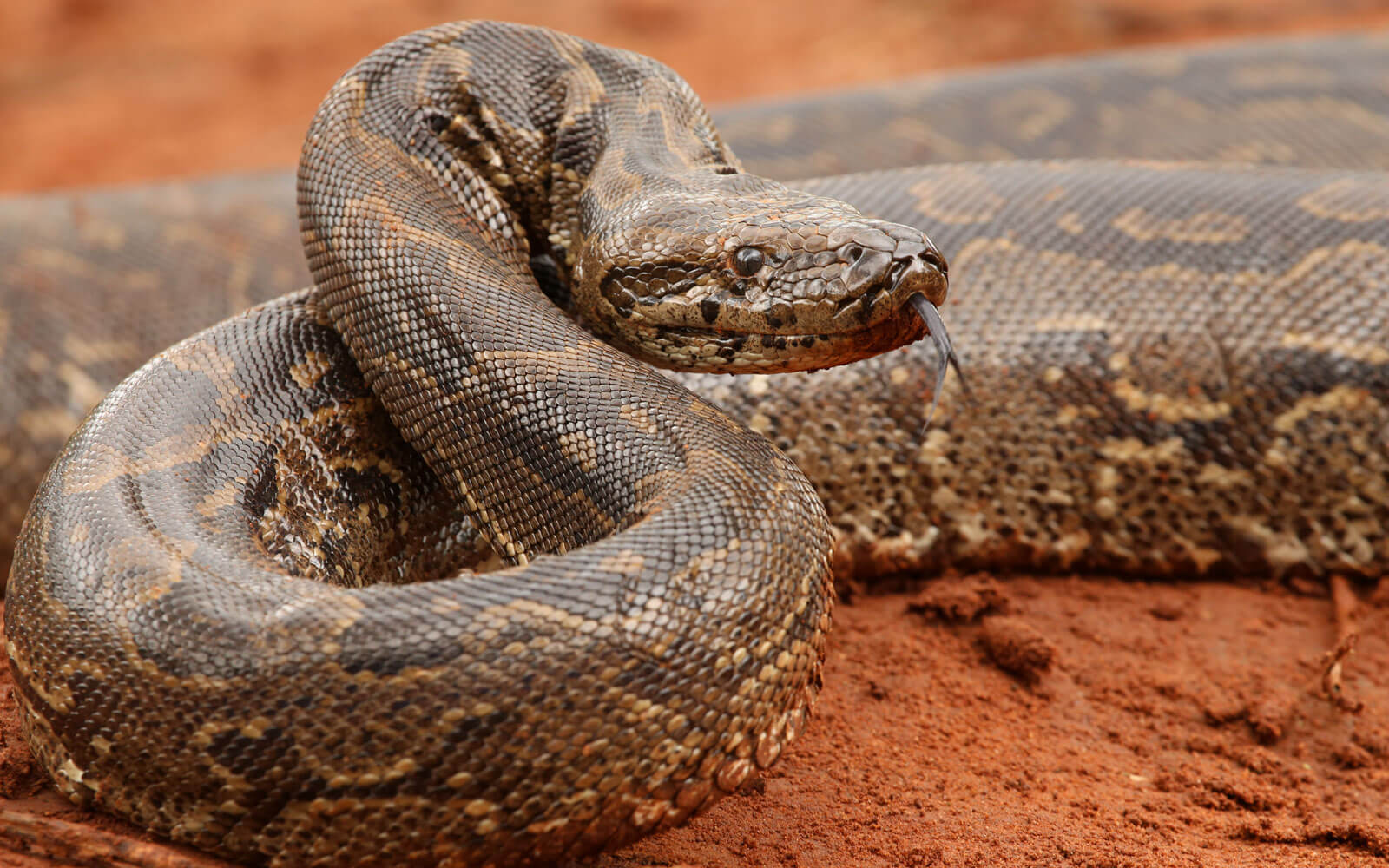 Large, old specimens usually use a lot of their colour, and this is a general process in most snake species. However, gravid/pregnant females, as well as incubating females, are often darker in order to retain more heat.

Something that, those who are scared of snakes, need to know: mother and father snakes, apart from one or two species, DO NOT LOOK AFTER THEIR YOUNG! I get many frantic calls from people who have found a baby snake, wanting me to come and search for the fearsome mother.

However, pythons are different, and to me, just remarkable!

A while after mating, the mother python will carefully select a ‘den site’, usually an old animal burrow. She’ll lay her eggs down there, but unlike other snakes, she won’t just leave them. In fact, without her, the eggs won’t hatch.

A 3m-4m mother python offers formidable protection to anything or anyone threatening her eggs, as you could imagine. The mothers will lunge at any attacker with force, with her teeth-filled mouth wide open. But it is not just protection that they offer to their eggs.

Mother pythons incubate their eggs, which I find amazing! They’ll go and bask in the sun, getting nice and hot. Once warmed up, they’ll return to their eggs, wrap around them, and give off the accumulated heat. They can actually keep their eggs at a temperature of around 30°C! 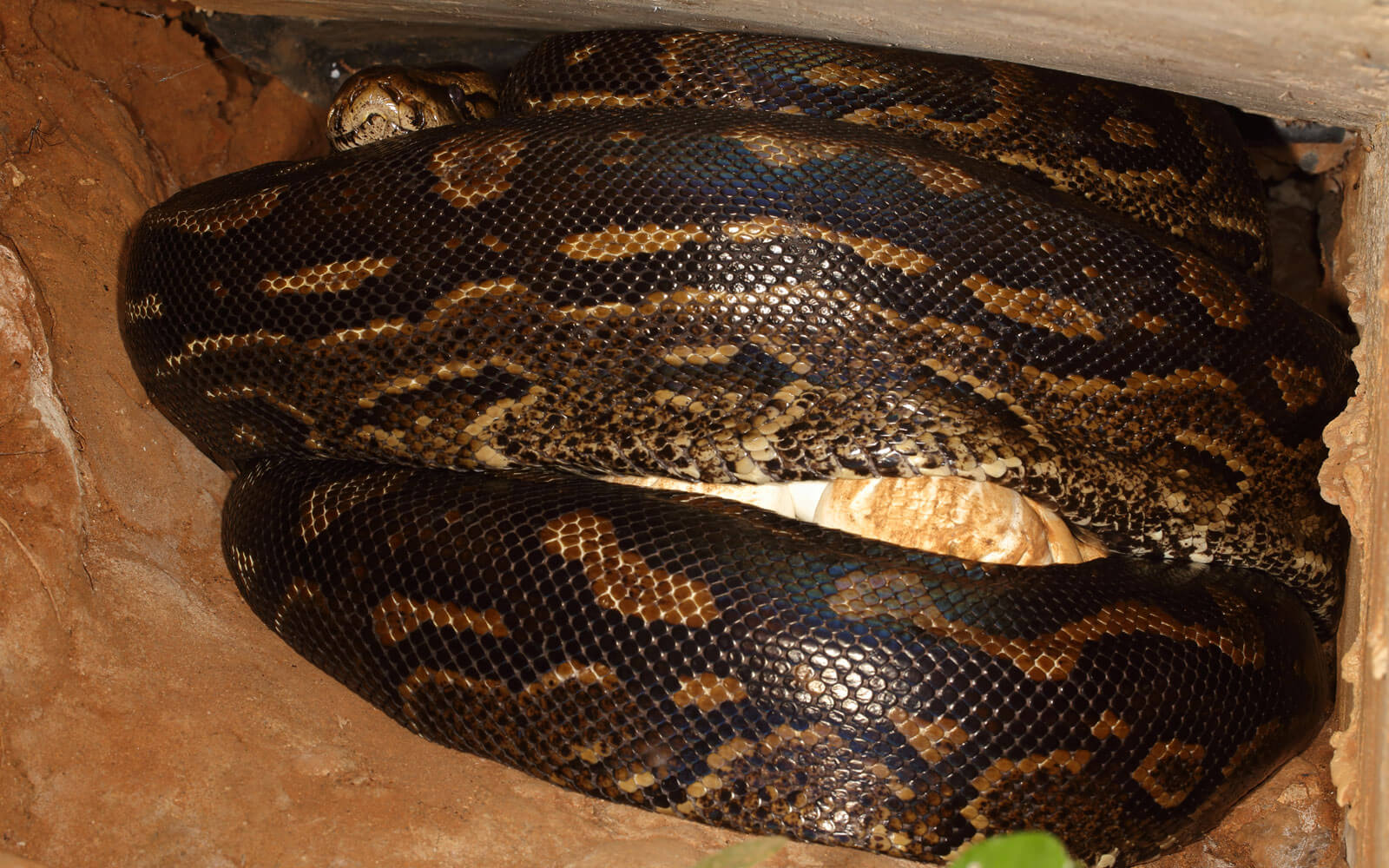 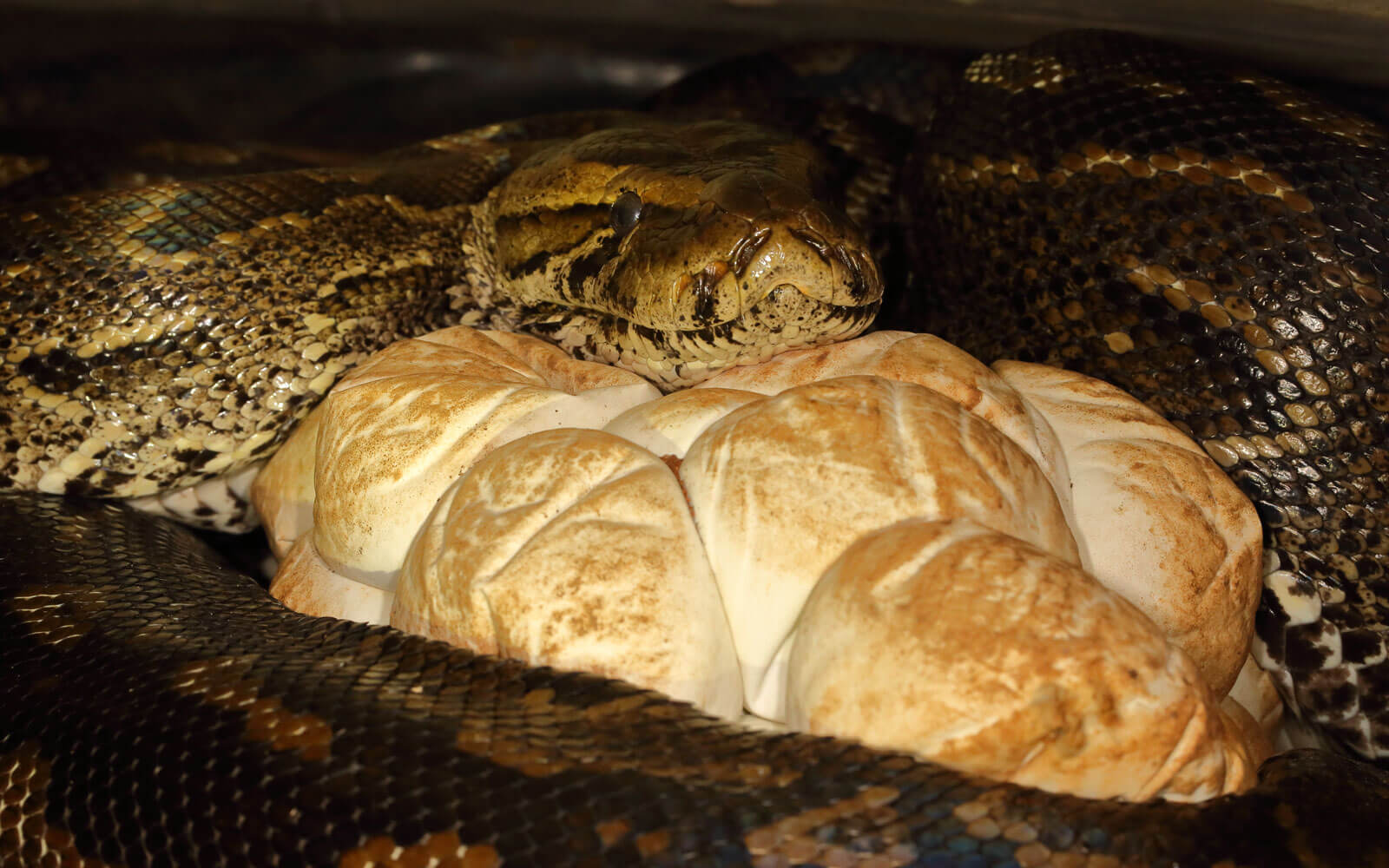 About three months after the eggs have been laid, they hatch. They’ll then stay at the den for about a week until their first shed, with the mother’s protection, before they all move off on their separate journeys. An incredible process.

Mother pythons can lay anywhere between 30-60 eggs, depending on their size. The young pythons around 40cm in length, and are extremely vulnerable to predators such as birds, monitor lizards, mongoose and genets. So anywhere between one to five or so will make it till adulthood, if they’re lucky. 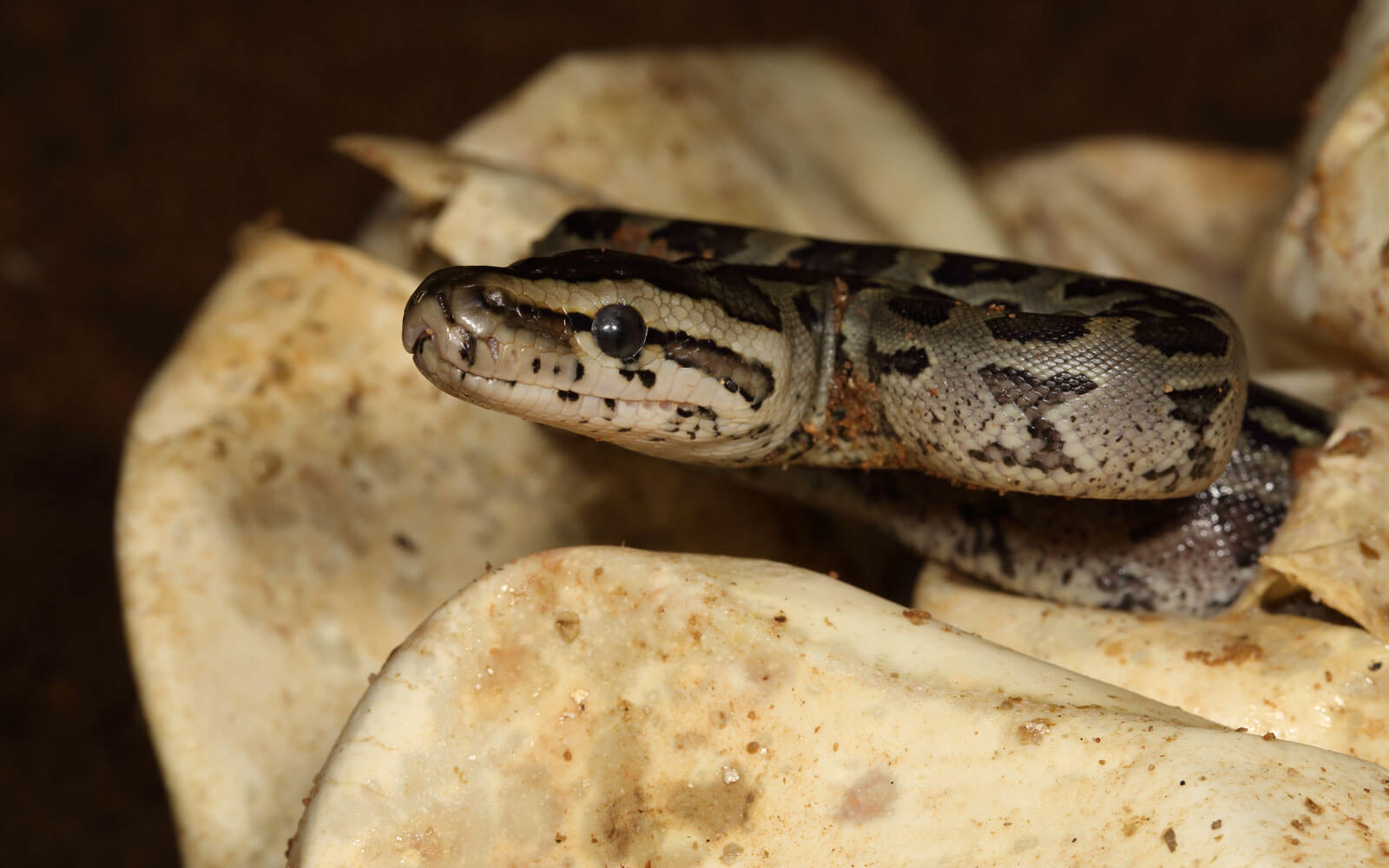 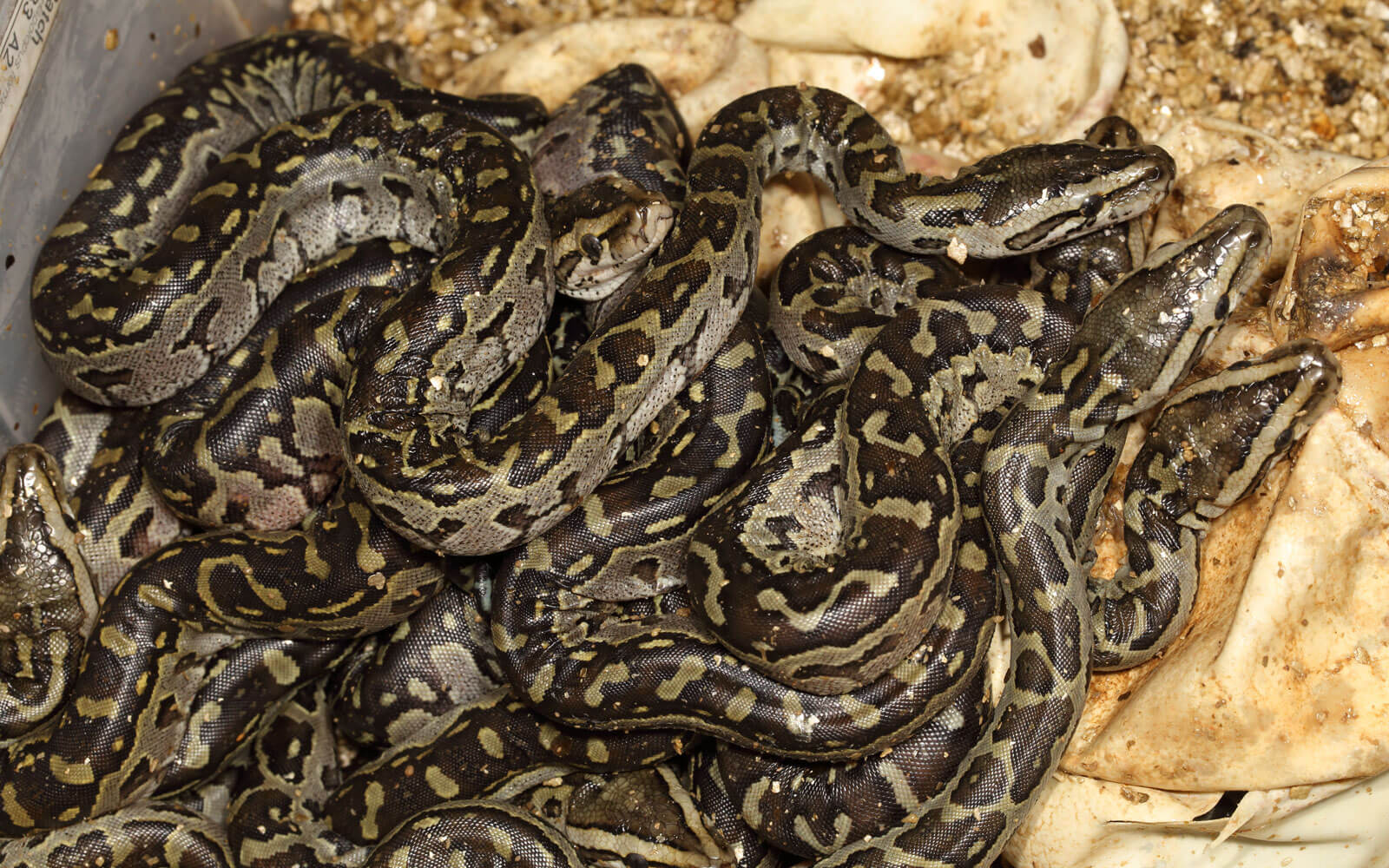 Plight of the pythons

The Southern African Python was once far more widespread and abundant than what they are now. I remember seeing a photo in the Bergtheil Museum, in Westville, of a whopper of a specimen being caught in the Palmiet Nature Reserve. A python has not been seen in that reserve for very many years, and believe me, I’ve searched.

They do still occur in the Krantzkloof Nature Reserve, thankfully, which serves as an important conservation area for them. Another well-known spot for them is Zimbali Eco-Estate in Ballito, where they are thriving. But there’s nowhere else really that’s close to Durban, where they’re doing well. The rest are further west and north.

Unfortunately, the beautiful and majestic python gets slaughtered constantly. Sometimes they’re killed out of fear. People see them as Anacondas, that could eat the whole family. More often than not, they’re killed for food, or for traditional medicine. I’ve had the misfortune of going into the muthi market at Warwick Triangle, and there are dozens upon dozens of python corpses there, not to mention a mind-boggling variety of wild animals. 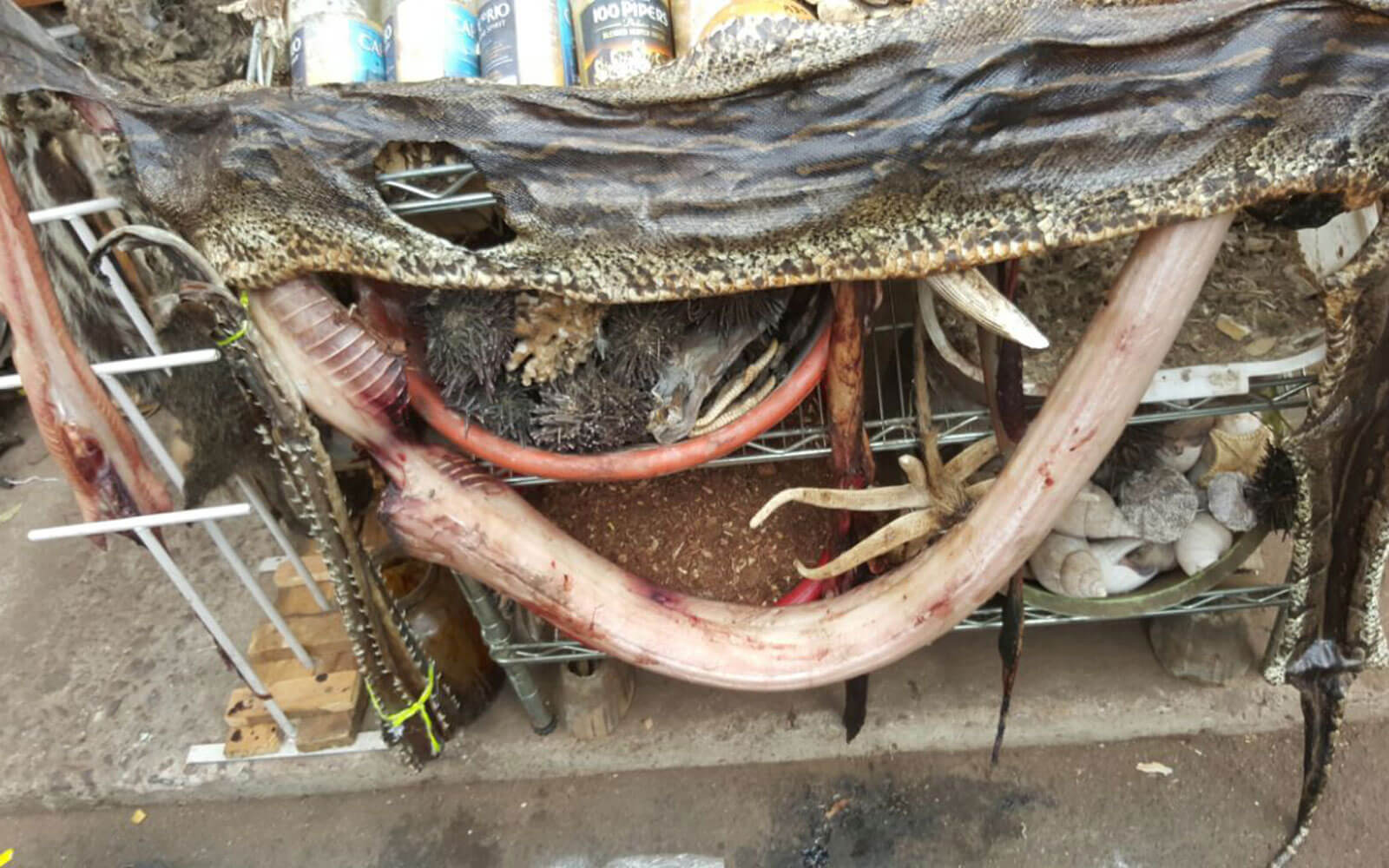 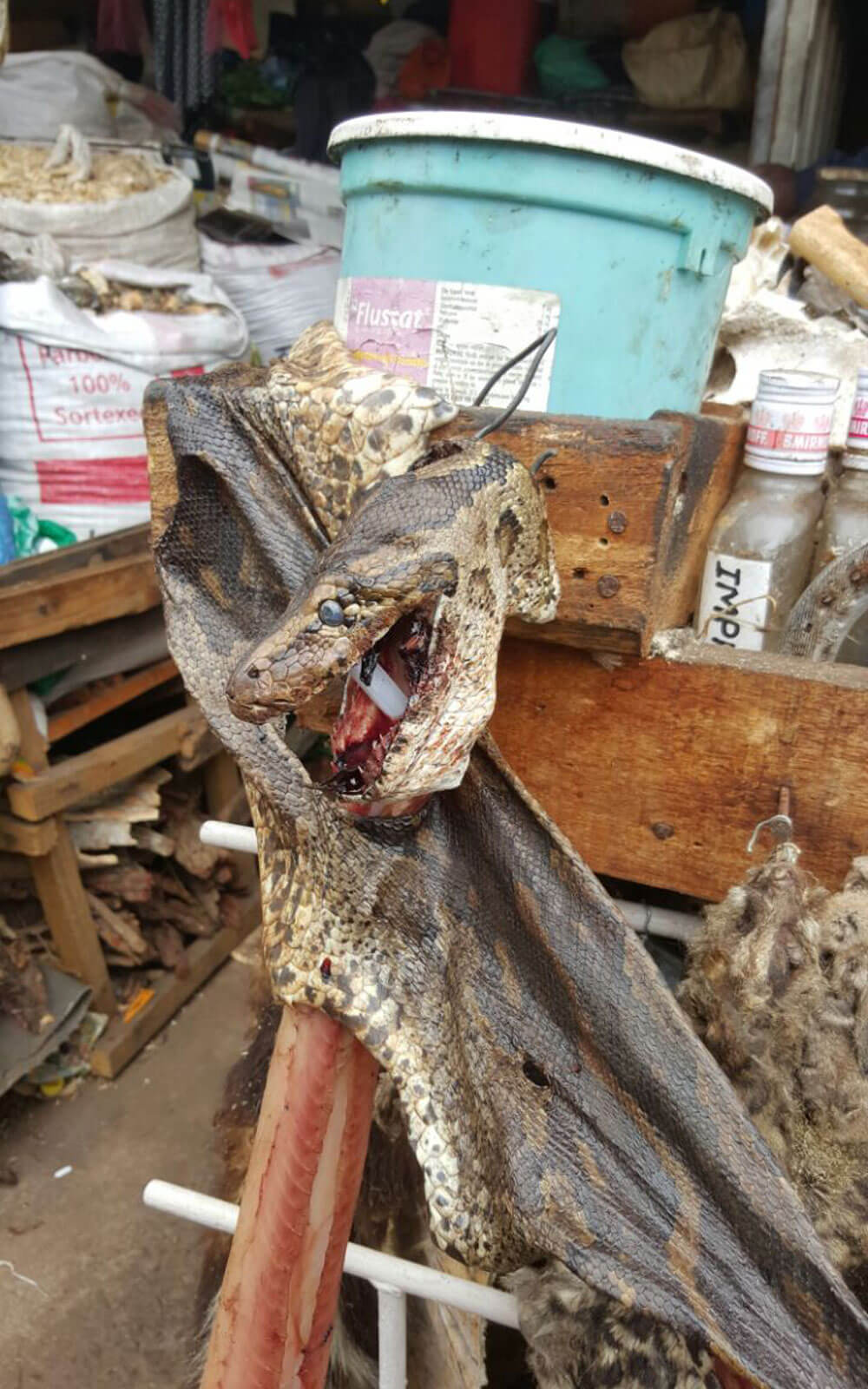 How most pythons end up at Durban’s Muthi Market

There still seems to be a relatively good number of pythons in Inanda, however, they are killed often. I remember last year, I was called for a trio of pythons who were together (two males going after a female). A man came with a gun and started shooting at them, definitely killing one, while the other two escaped, but presumably would have died from their injuries.

Thankfully, though, educational efforts are well and truly paying off. I’ve had two recent instances where one person has kept many people away from pythons, preventing them from killing the snake, until I arrive to take the snake away. These cases have been so rewarding for me to see, and so encouraging.

Education is the best and probably the easiest way of protecting our wildlife. Please educate where you can. Trying to educate people about snakes can be difficult, particularly if they have a serious phobia. But it is possible for people with such a phobia to overcome it.

If you know someone that lives in a rural area, and who does encounter pythons, please suggest that they call snake-catchers rather than killing them.

The Southern African Python is the country’s largest snake. It is an iconic animal, a magnificent animal, that really deserves protecting. Nick Evans runs KZN Amphibian & Reptile Conservation. He spends most of his time teaching people about snakes across the province, and removing unwanted snakes from homes in the Greater Durban Area. But he has always had a love for chameleons, and spends many evenings looking for them, whether it’s just for ‘fun’ or whether its to survey populations.