This article is made available by the Botanical Society KZN Coastal Branch. 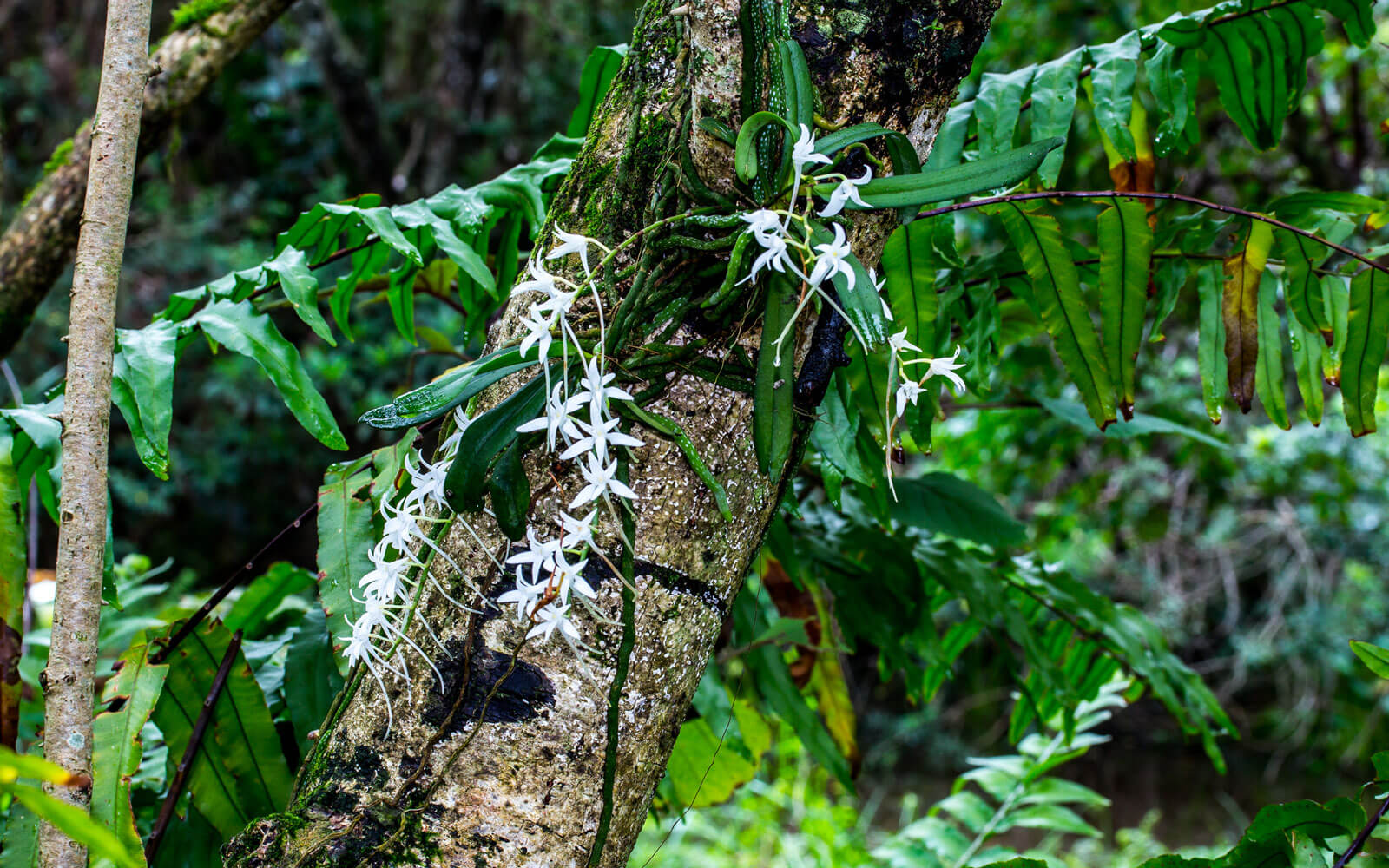 If we called a person a parasite it would not normally be taken as a compliment. Parasites are universally held to be “bad”, making a living by sponging off others. Yet this is a very anthropomorphic view, where standing on your own two feet and making an honest living whatever the adversities, are held in high esteem. The rest of the world does not operate this way, and natural selection favours any lifestyle that works.

Parasitism is in fact an advanced, perhaps the most advanced, form of evolution. It is a step beyond predation which involves the death of a food source, and the need to strive to find another. By contrast parasitism is the controlled exploitation of a resource. Obviously, the resource suffers, but in a highly tuned relationship, only a little. Fine tuning of parasitism is the rule rather than the exception, parasites that do not stress their victims being more likely to survive in the long term. Such ﬁne tuning means that a particular parasite is often speciﬁc to a host species and is a major contributor to the cause of biodiversity. Equal rights for parasites!

There are all sorts of parasitism.

Structural parasitism is the most acceptable to the fair-play devotees. Technically an epiphyte is a structural parasite, grabbing a place in the sun, without investing in a trunk, by parking on an unknowing tree.

Stranglers are a level more hostile. Although they have a trunk, they have skimped on engineering standards, and are large enough to sometimes place a strain on their support. Stranglers go the whole hog. Large ﬁgs, such as Ficus natalensis, F. lutea and F. stuhlmannii, are South Africa’s best examples of stranglers. Masquerading as epiphytes they start life almost innocently in a tree fork. But instead of managing with a few grams of trapped leaf litter for soil, and so being restricted in size, they put a root down to the soil. Now they can enjoy full sunshine from birth without being on severe water rationing. The fate of the host is now sealed, even though the strangle may take a hundred years. The crime is temporarily concealed when the host is literally swallowed by the strangler, only to have its macabre details exposed a further hundred or more years later when the strangler itself dies of old age and is blown over in a storm. For although the host has long since decayed it leaves a cast of its trunk within its tomb. 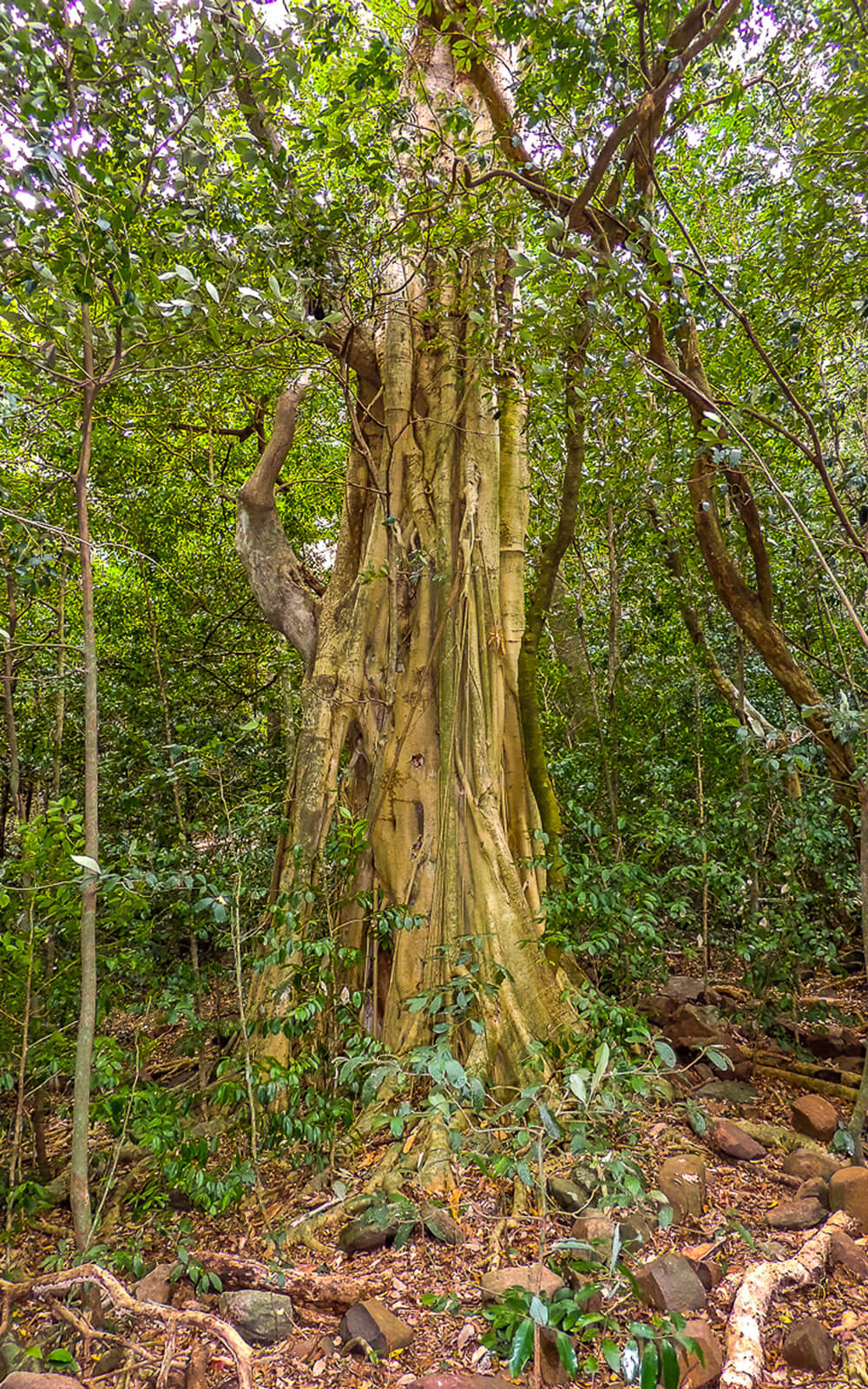 In a stricter deﬁnition of parasitism there is a biochemical relationship between partners, the parasite deriving some or all of its food from the host. This sort of parasitism is seen in a number of different plant groups that are not necessarily closely related. The implication is that parasitism has arisen independently several times. This is quite a big “ask” in evolutionary terms, given that the food exchange can occur via a physical union of vascular systems. So what we need to account for the evolution of plant-upon-plant parasitism is an event that is likely to recur many times, or some sort of general property of a component of a plant’s biology that could slip into a parasitic role without greatly changing a plant’s way of life in its intermediate stages.

An example of the ﬁrst possibility is a mechanical accident that bares internal tissues of adjacent plants. A rock fall on roots might sufﬁce, especially in the presence of soil fungi that are brimming with biochemical potential. There would be no reaction at all on many occasions, but the experiment would not prove harmful to either partner. Once in a while such tissue contact would prove fruitful (for the latent parasite anyway!). 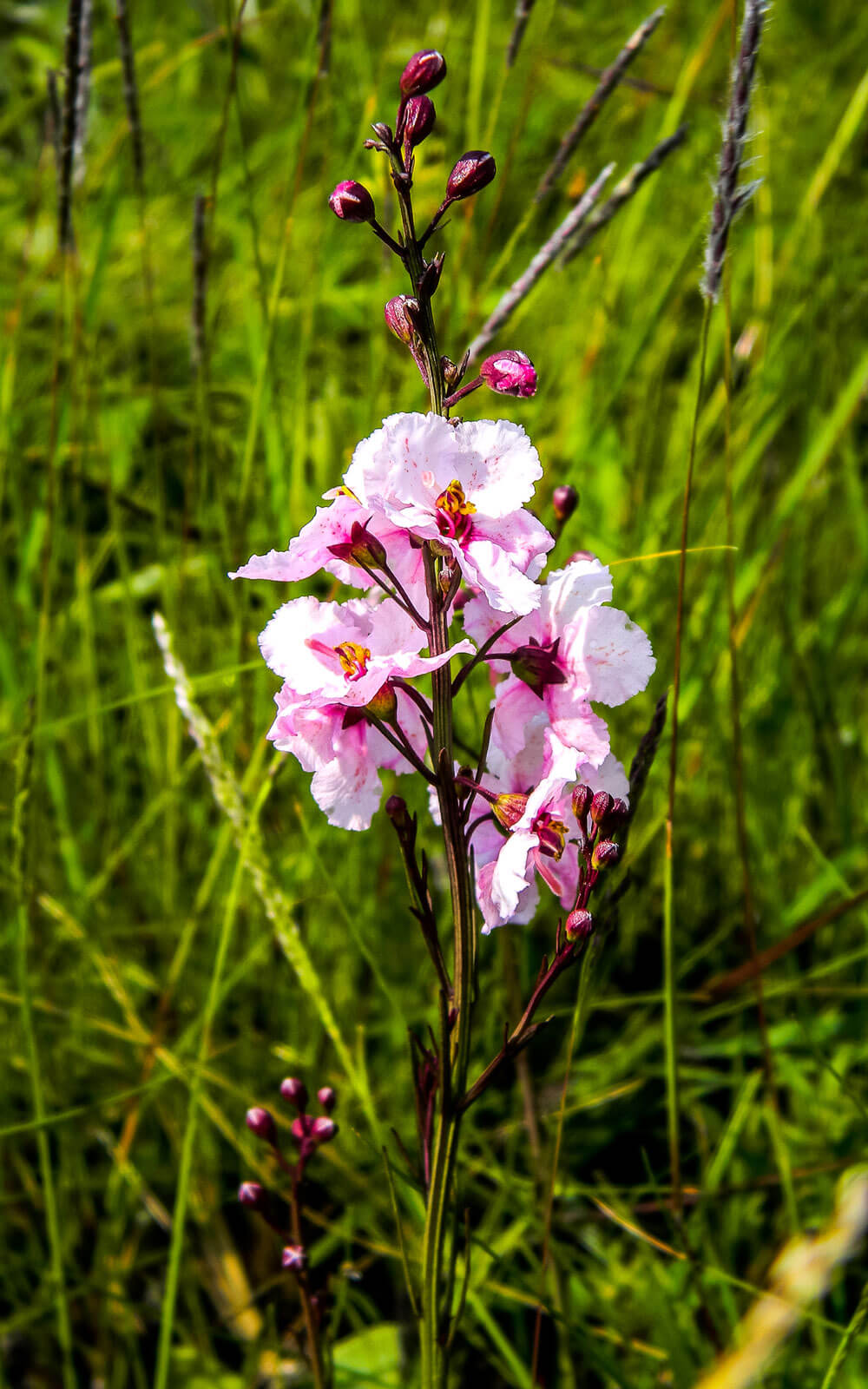 An example of the second mechanism might be that roots once had, or may still have, the general property of plugging into anything that provides a reward. Usually roots take the option of soaking up boring old water and minerals, but if they can abstract these and photosynthates from another plant that has already done the hard work, then so much the better.

There are several ways in which the parasite penetrates the host. Mistletoes have dispensed with soil altogether. A sticky seed is wiped from a bird’s beak onto a branch. It germinates and puts out a haustorium – a root that can penetrate bark, presumably by enzymatic action – to reach its host’s food supply. Other stem parasites, the dodder being an example, germinate in the soil and climb up a host like a normal twiner. However, once in contact with host bark, the parasite puts out adventitious roots that plug into the host. A different avenue is demonstrated by root parasites. These germinate in the soil, then form root-to-root connections. 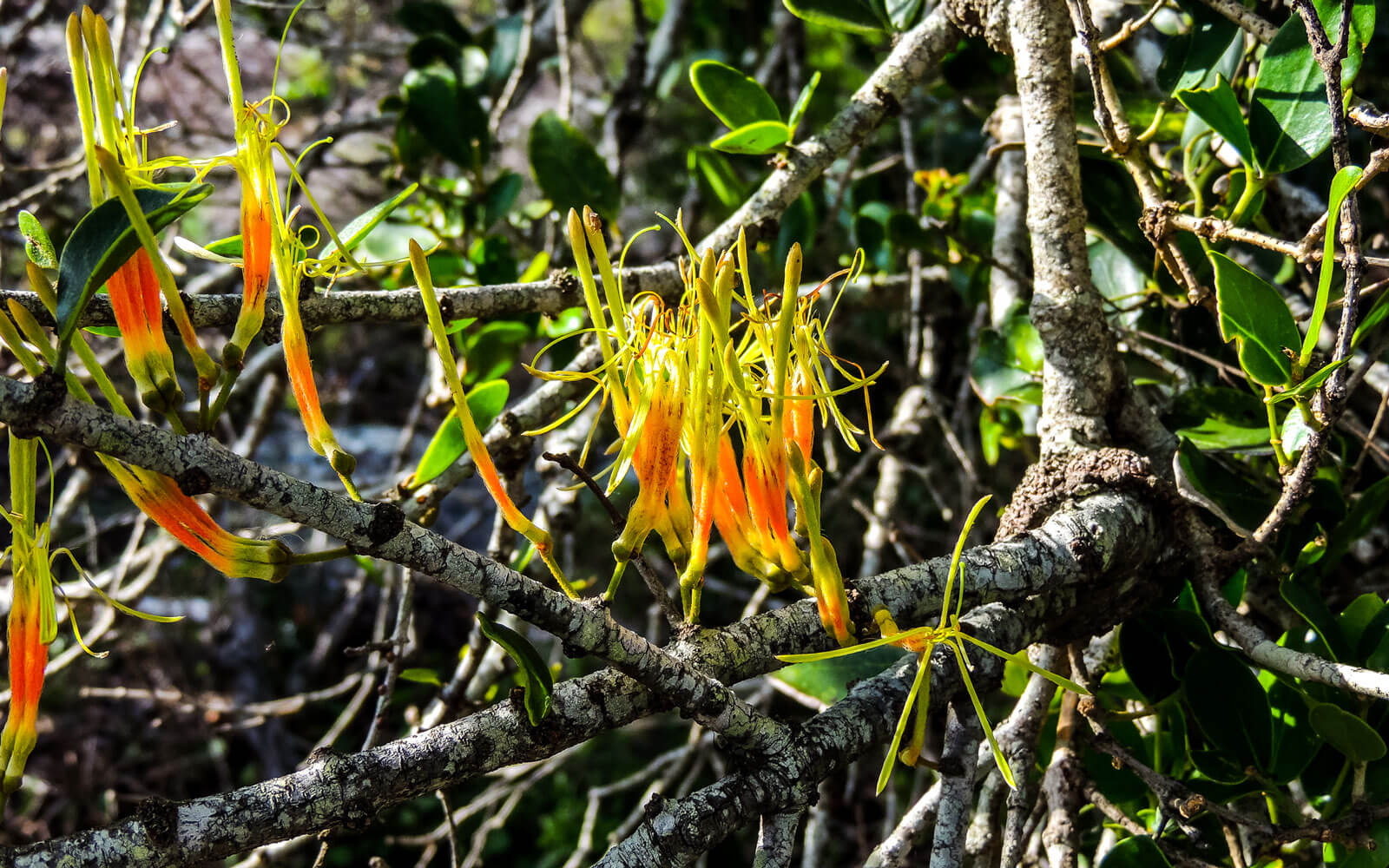 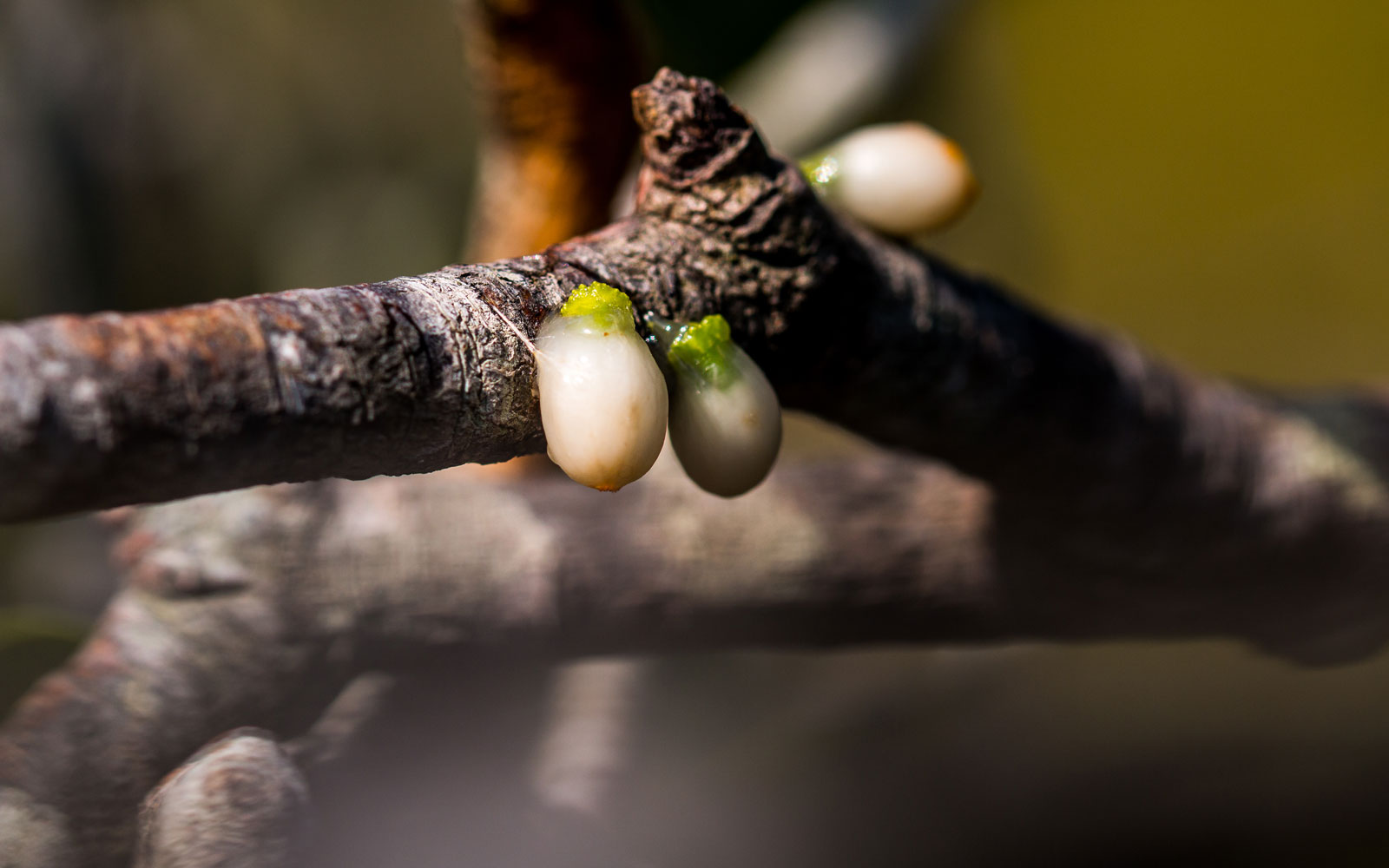 Two germinating E. dregei seeds with the haustorium forming on the bark of the host plant

There are different degrees of parasitism. A few parasites have no green tissue at all, so cannot photosynthesise. The spectacular Hydnora is an example and could easily be assumed to be a fungus. Some parasites can summon up a little chlorophyll if disconnected for their host, as does dodder. Other parasites have green tissue, so can manufacture some food, but never thrive in the absence of the host.

With a few notable exceptions, there is a marked degree of host speciﬁcity in plant parasites. This is because hosts each have a unique range of chemicals – most of which were devised in the first place to deter predators and other undesirable characters. The parasite that can overcome this chemical obstacle is the one that will forge a successful relationship with the host. Indeed, many parasite seeds only germinate in the presence of the roots of the correct host, the cue being provided by the chemicals released by the roots. 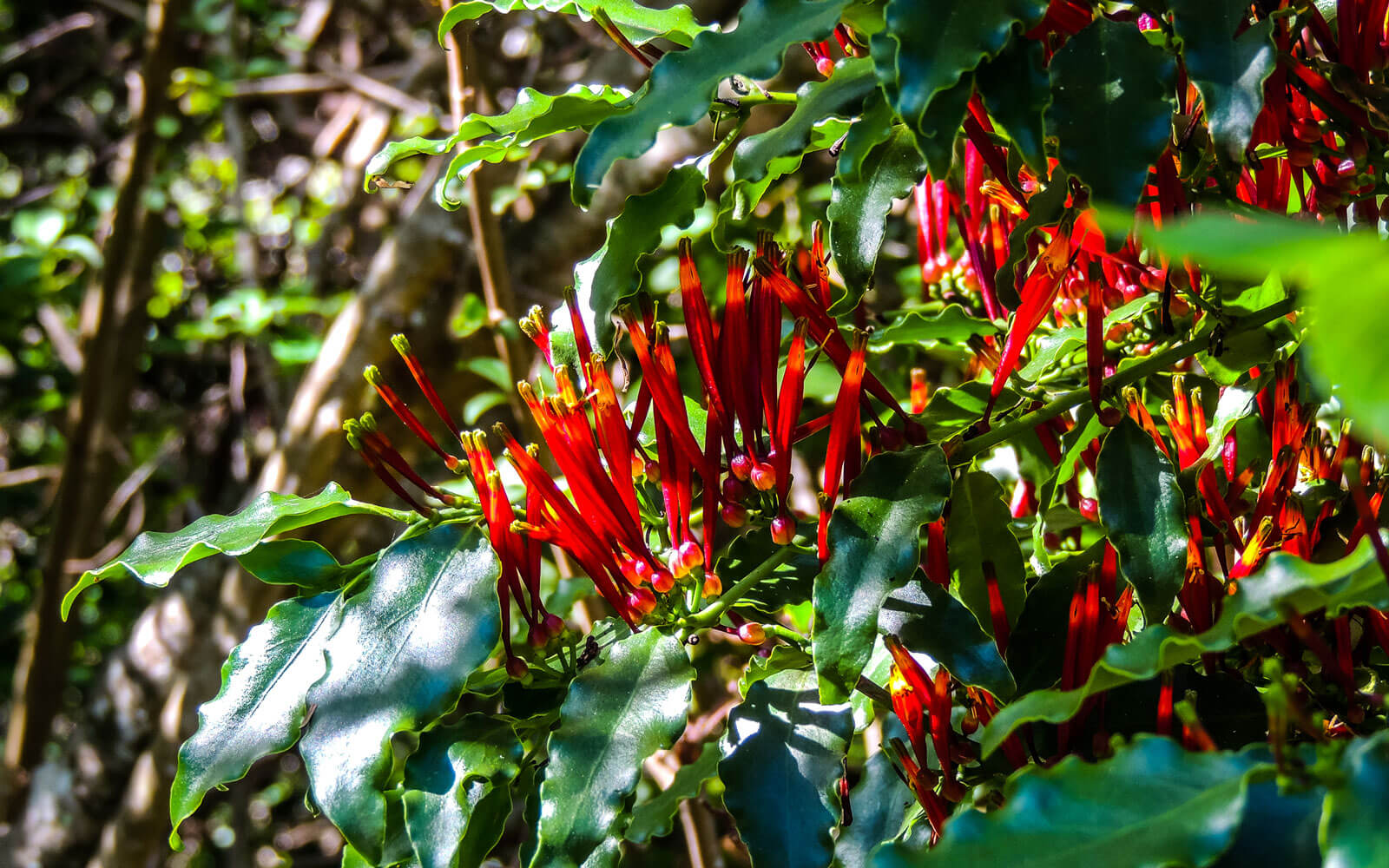 Within South Africa there are ten families of plants that include true parasites. Two of these, the Loranthaceae and Viscaceae, the mistletoes, are sometimes lumped together. They are small shrubs, always attached to a host tree with a clublike structure, formed where the haustorium penetrates the host. Acacia tortilis and Boscia spp. are often parasitised in this way. The parasite load is not usually enough to kill the tree. However, a tree unlucky enough to ﬁnd itself at a major crossroad in a bird highway may receive a fatal dose of sticky pips deposited on its branches.

Parasites in the Lauraceae and Convolvulaceae are flimsy climbers. They are initially rooted in soil but plug into host stems and then twine around them. Eventually growth is rampant, and the host usually dies.

“Normal” looking shrubs, rooted in the soil, are seen in the family Santalaceae. Indeed, proper trees appear here, notably Colpoon, a dune inhabitant. All Santalaceae are green and can live independent lives. Probably all start off as free living but seem to parasitise any roots within striking distance. No host speciﬁcity here. 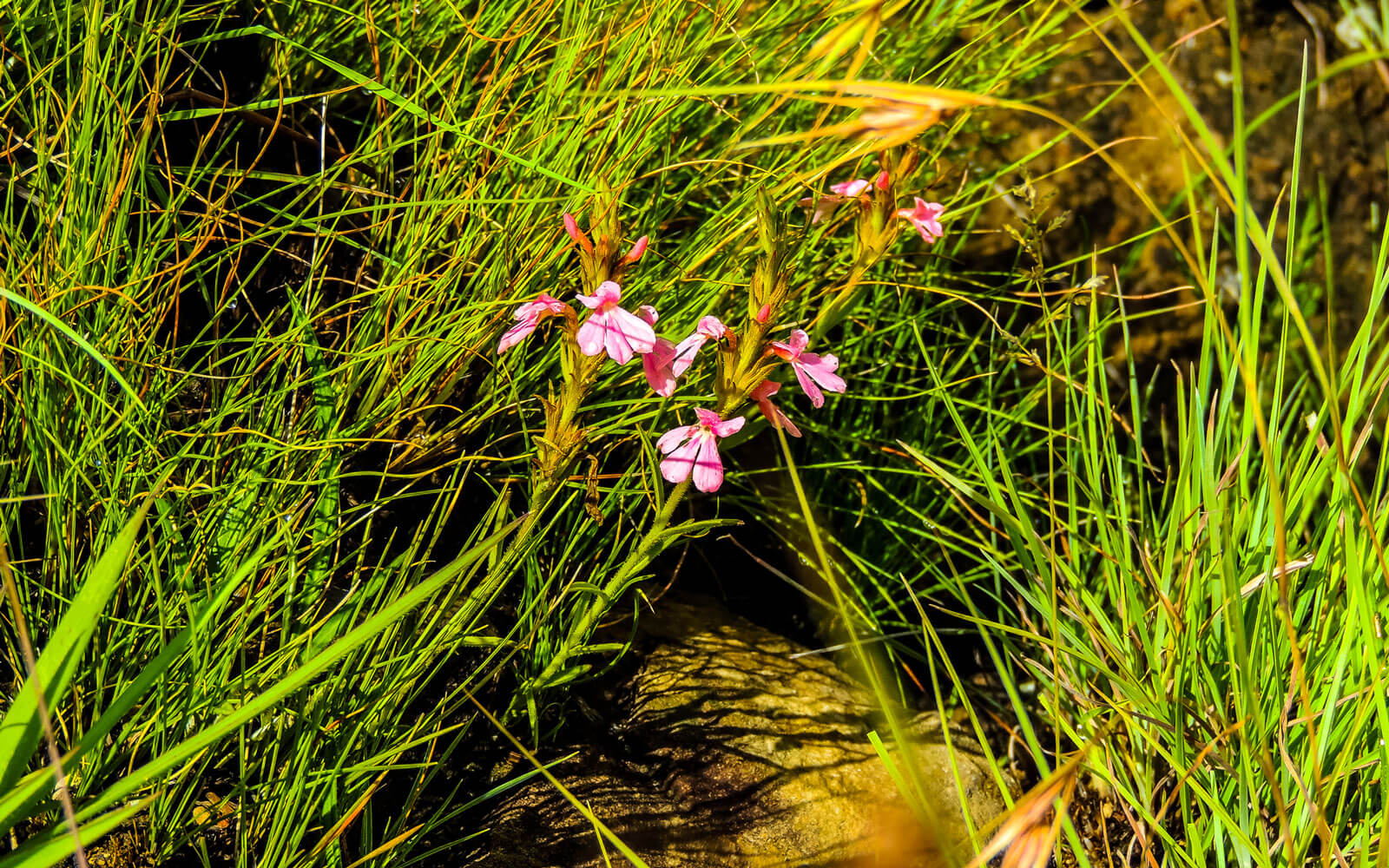 Nearly as normal are parasites in the Scrophulariaceae. Tiny seeds containing very little food are a characteristic of the family. This means that they must germinate virtually in contact with the host root. Many species occur in South Africa. Some are annuals, other perennials, most, such as Striga bilabiata, having green leaves. This species nevertheless parasitises wild grasses. The related Striga elegans can transfer its attentions to maize and become a commercial pest. The beautiful Harveya lacks leaves, but otherwise looks no more sinister than other plants, such as some lilies, that put up leaﬂess ﬂowering spikes. However, we begin to see, for example in the extravagant Hyobanche, a trend in ﬂower design towards the eccentric, almost as though the plant was announcing its yucky lifestyle in a suitably tawdry fashion.

This trend reaches grotesque extremes in the families Balanophoraceae, Rafﬂesiaceae and Hydnoraceae. All pre-existing standards of what ﬂowers are supposed to look like are thrown on the compost heap. Here there is no delicate subtlety of design, scent or colour, no familiar form to grace a vase. Garish ghastliness rules. 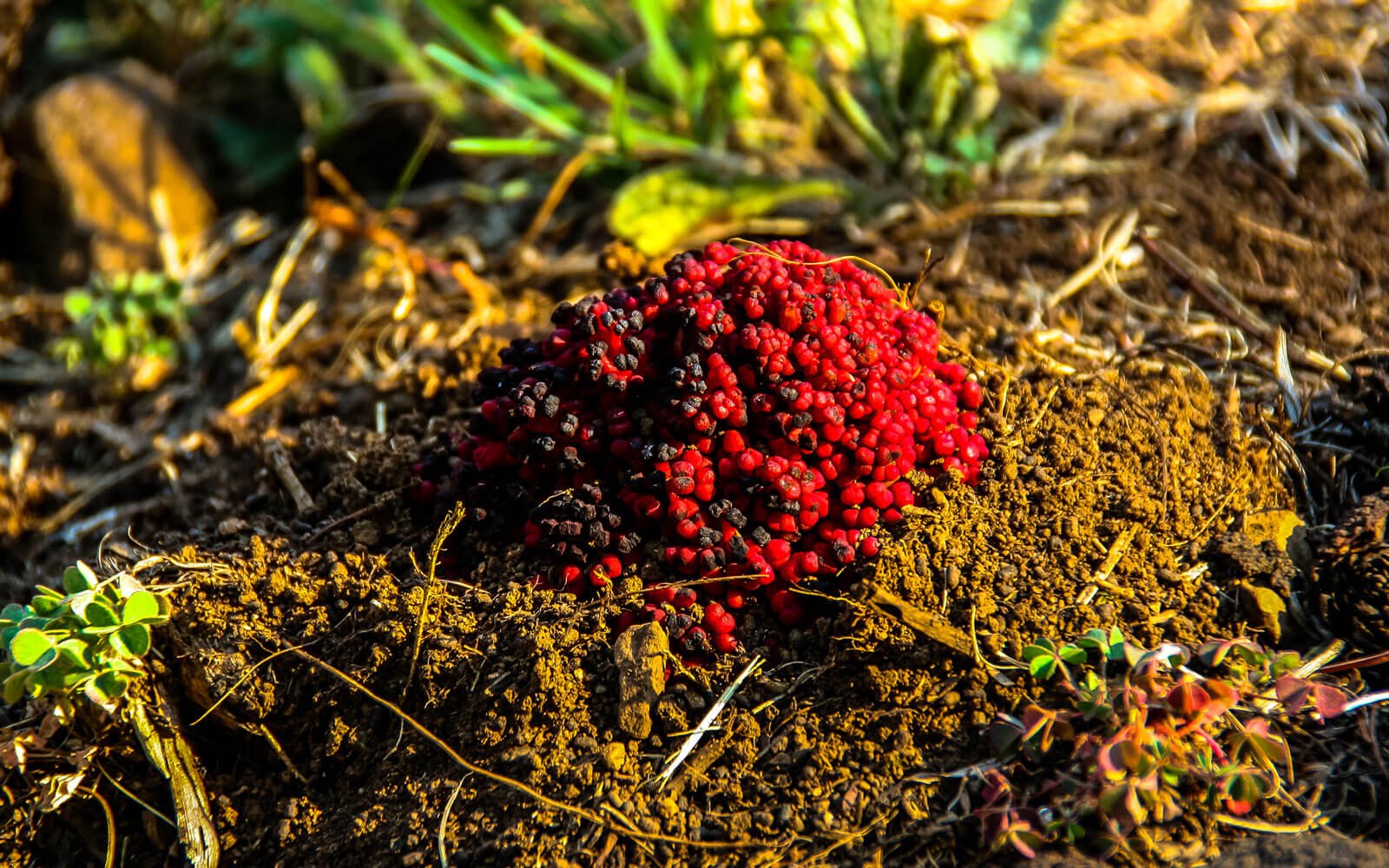 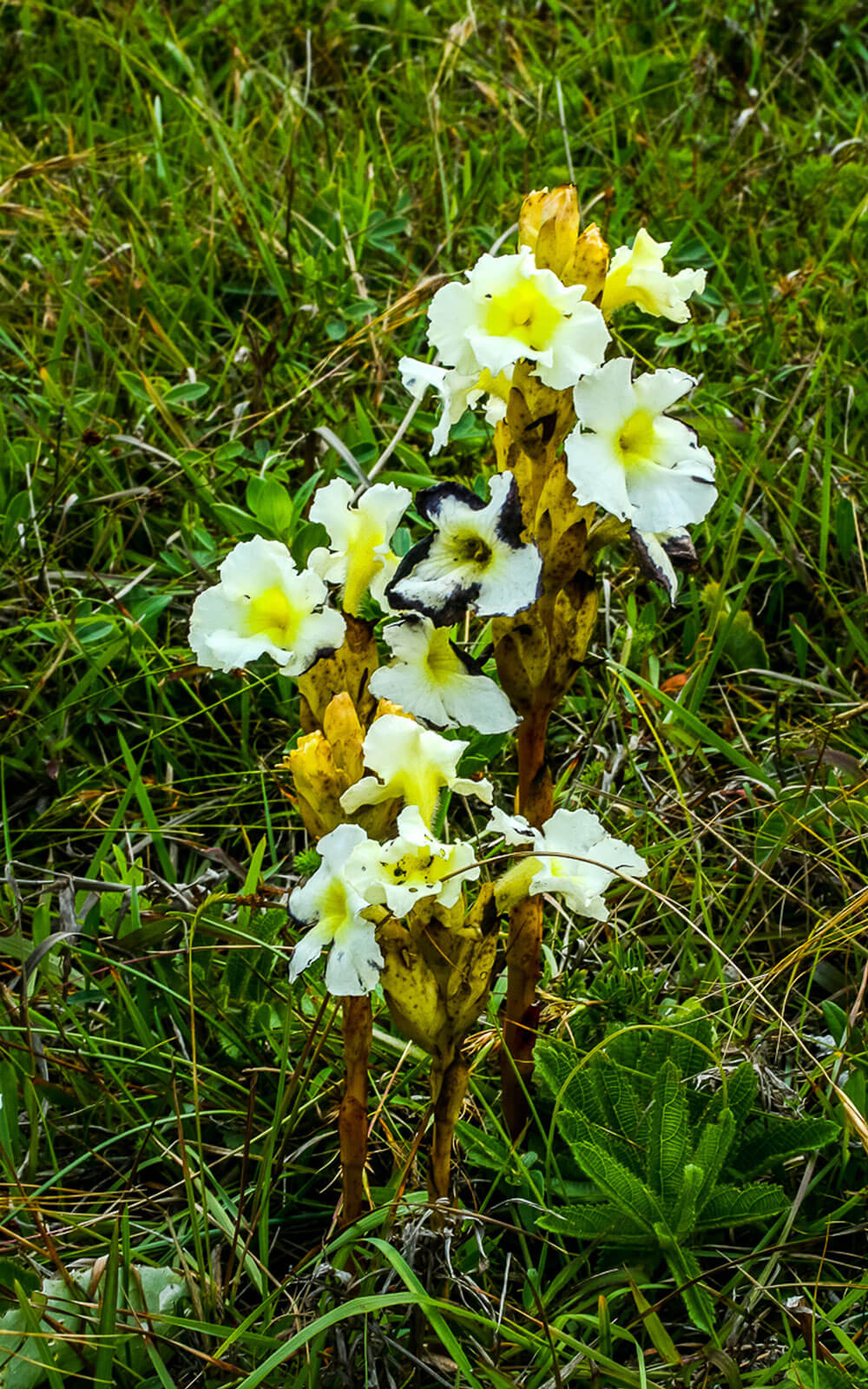 Mystropetalon is an example of the Balanophoraceae. All we see above ground is a cross between a raspberry and a toadstool erupting in colonies beneath proteas. Its close relative is Sarcophyte, whose ﬂowering mass looks, and smells, like a dried heap of rotting minced meat. It plies acacias with its affections.

Rafflesiaceae ﬂowers look like little bits of red plastic. They emerge from the host roots, but often far from the host stem, seemingly in the middle of nowhere, adding to their unworldly nature.

Having tried initially to portray parasitism, if not as respectable, at least as professional in a Maﬁa sort of way, we have advanced far down the path of decadence. The honest ethic – that uniquely human artefact – has been abandoned, and so have our conservative tastes as to what constitutes beauty. Ain’t nature wonderful? 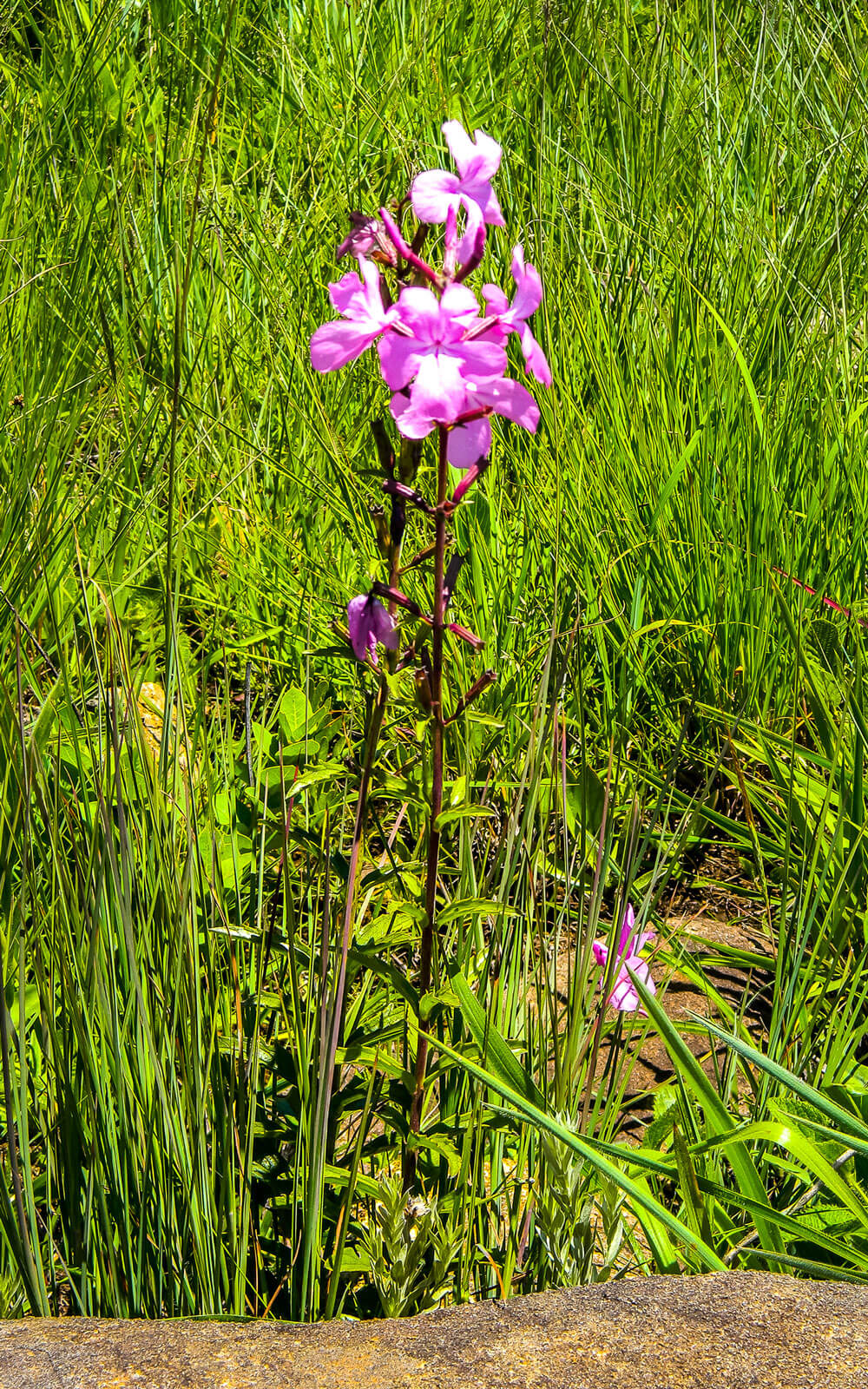 This article was first published in the Botanical Society KZN Coastal Branch Magazine, PlantLife, No 17 September 1997.

Note: Some of the family structures referred to have changed since the paper was written in 1997. Hemi-parasites such as Sopubia simplex, Cycnium racemosum, etc now fall under Orobanchaceae and not Scrophulariaceae. Viscaceae has been moved to Santalaceae. 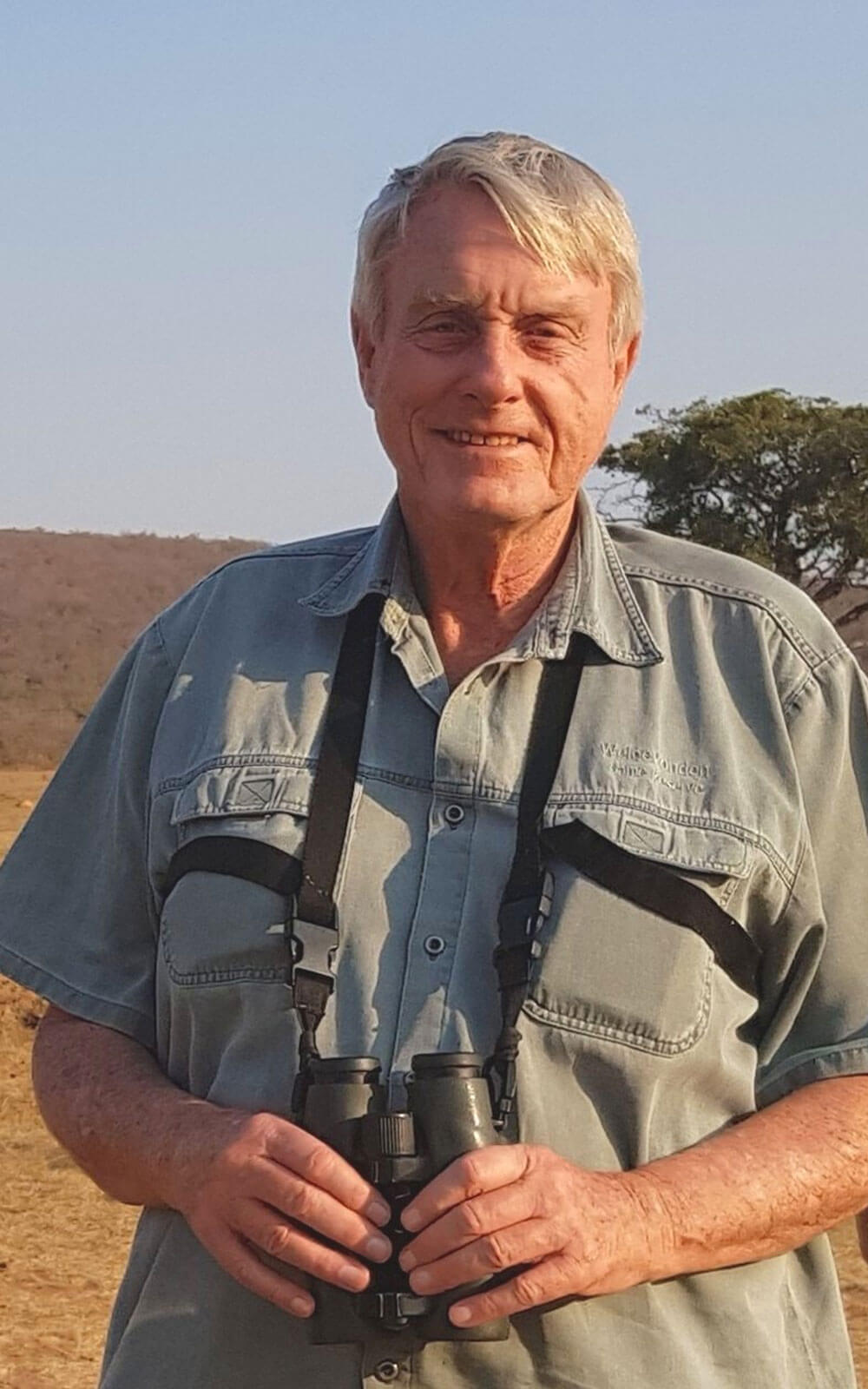 Dr David Johnson was resident Ornithologist and Animal Ecologist (Biodiversity) at the Natal Parks Board for twenty years. Since then he has been a freelance ecologist with an interest in all things natural. He has written a book with his wife Sally “Gardening with Indigenous Trees and Shrubs”.

About the Botanical Society of South Africa

There has never been a more important time to support and protect the natural wonders that grow on South African soil.

The Botanical Society of South Africa is a member-driven organisation that offers citizen scientists, amateur nature enthusiasts, the general public, and environmental experts the opportunity to join hands and be a part of the solutions to biodiversity challenges across the country.

We host the annual BotSoc Coastal Branch Indigenous Plant Fair in September, as well as monthly talks, outings, and garden visits. Sign up for the Newsletter and keep up to date with our events.