Globally there are 34 carnivorous mammals that fall under the family Herpestidae, which are commonly referred to as mongooses. Mongooses are native to Asia, Africa, and southern Europe and have, through human forces, been introduced elsewhere in the world. These small carnivorous mammals are noted for a slender, agile body, small ears, a pointed nose and a long furry tail. They live within a diverse range of habitats types, from forest marshlands to open savannah, and exhibit unique behavioural traits within either a dynamic social group, or simply as solitary individuals.

These highly adaptable mammals remain incredibly understudied and little knowledge exists of their ecological importance. There is an urgent need to promote these small carnivorous mammals in the public eye, to ensure conservation measures are put in place to preserve these fascinating animals.

South Africa has 11 different species that belong to the family Herpestidae (one-third of the global population).

These mongoose species are distributed all over the country and fulfil particular ecological niches in the habitats within which they persist. Although relatively common and widely distributed throughout the country, mongooses have been in general overlooked by scientific study, conservation and public awareness on the whole. The small, sociable mongooses: dwarf, banded and meerkat (not commonly referred to as a mongoose, but still belonging to Herpestidae family) have been extensively studied.

Their gregarious behaviour and hierarchical structures have seen decades of investment from European/America research institutions to understand these social animals better. However, their larger, solitary relatives have received limited research interest both locally and globally and continue to be poorly studied. Yet, these carnivorous mammals, whether colonial or solitary, play a crucial role in regulating and maintaining ecosystems within their trophic level.

This article aims to finally bring these enigmatic species into the spotlight of ecological research. Over the past couple of years, KwaZulu-Natal was the chosen stage for this ecological research. Two species of mongooses; large grey and water have been the focus species of this study. Through the use of Global Positioning System (GPS)/Ultra High Frequency (UHF) tracking devices, scat collection and questionnaires we will be able to address the knowledge gaps present in these two species of solitary mongooses.

The large grey mongoose, also commonly referred to as the Egyptian mongoose, is a solitary diurnal mammal. They are long, slender mongoose with coarse grey hair, measure under 1.2 m and weigh between 1.4 – 4kgs. They have a wide distribution stretching from southern Africa, extending into regions of the Iberian Peninsula and Turkey (see map). 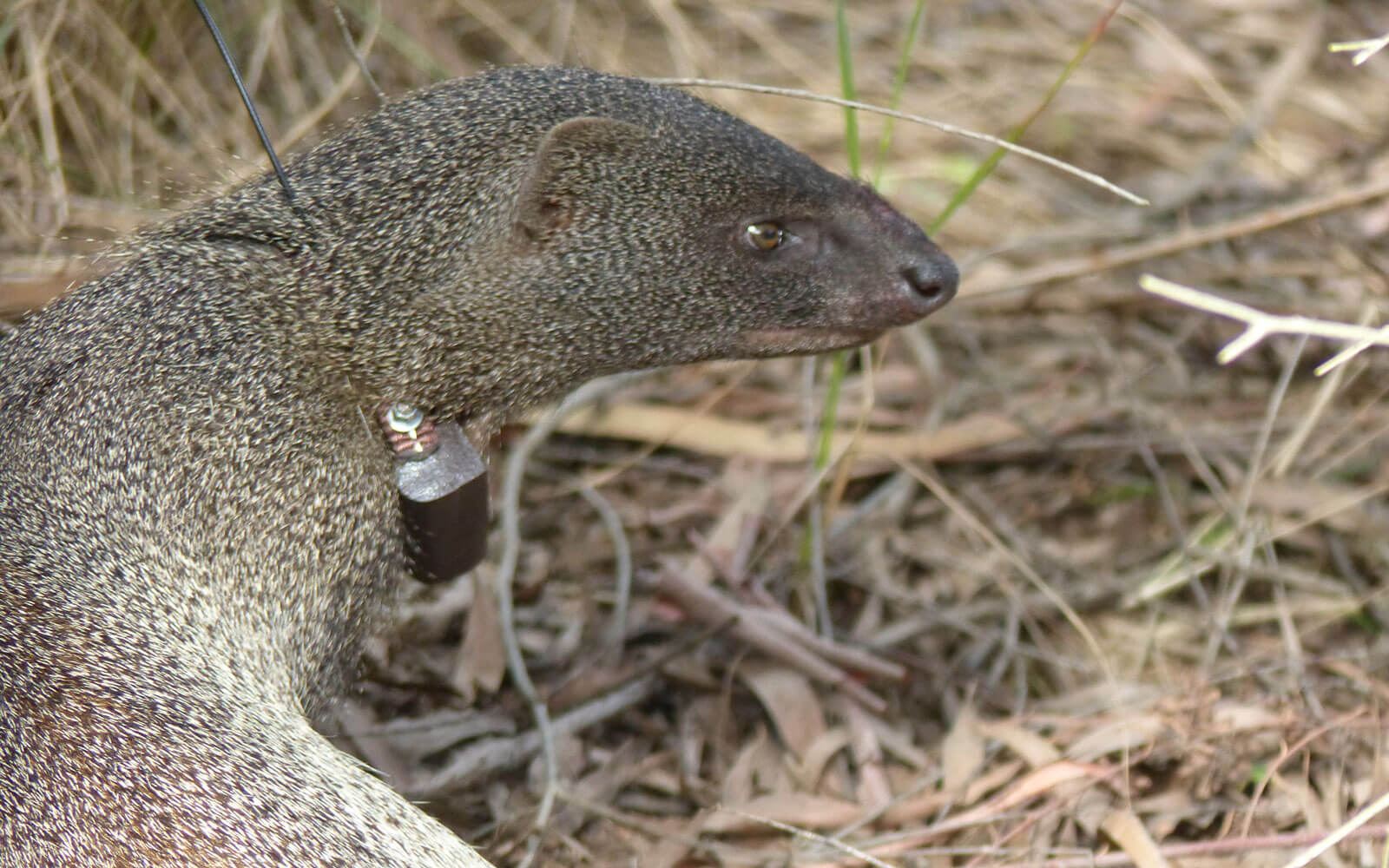 This animal prefers to inhabit savanna and scrub close to water sources which have access to dense bush cover to escape predation threats. Living up to 12 years in the wild, these formidable hunters prey on a variety of food resources including small mammals, birds, snakes, frogs, fish, insects and crabs with a fondness for eggs. They have even been recording preying upon blue duiker and cobras!

Primarily known as a solitary species, large grey mongooses have been known to form family groups or mating pairs. Large grey mongooses can have two litters per year, with up to 3 pups per litter. They were prized historically by the Egyptians for their prolific ability to kill venomous snakes and locate crocodile nests for the harvest of eggs. Large grey mongoose appeared in Egyptian paintings as early as 300 BC and was considered a holy animal. They are purported to have been revered and even housed in temples.

The water mongoose, also commonly referred to as the marsh mongoose, are solitary and nocturnal mammals. They are large mongooses with a robust head and body mass between 2.5 – 5.5 kgs and measuring just under a meter in length. They have an extensive distribution ranging from southern Africa stretching into eastern, western and central Africa (see map). 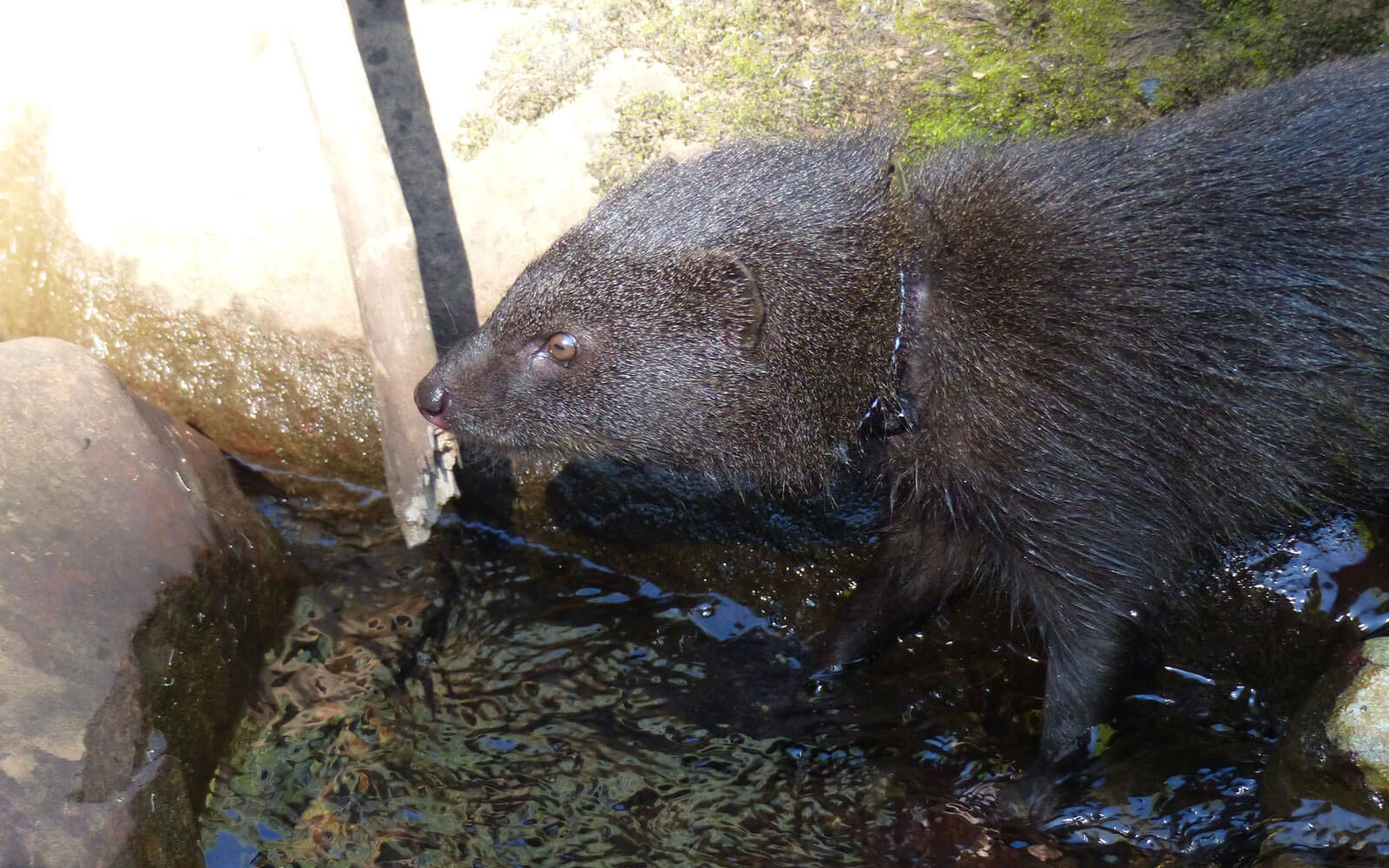 Water mongooses can have two litters per year with up to 3 pups per litter. These incredible animals can dive underwater for up to 15 seconds using their powerful paws to pursue aquatic prey. Water mongoose has developed an ingenious strategy for capturing birds as prey. The hunter lies on its back motionless, with its pink anus exposed which lures aerial predators. When an unsuspecting or naive bird comes to investigate, they are swiftly captured by the canny hunter. 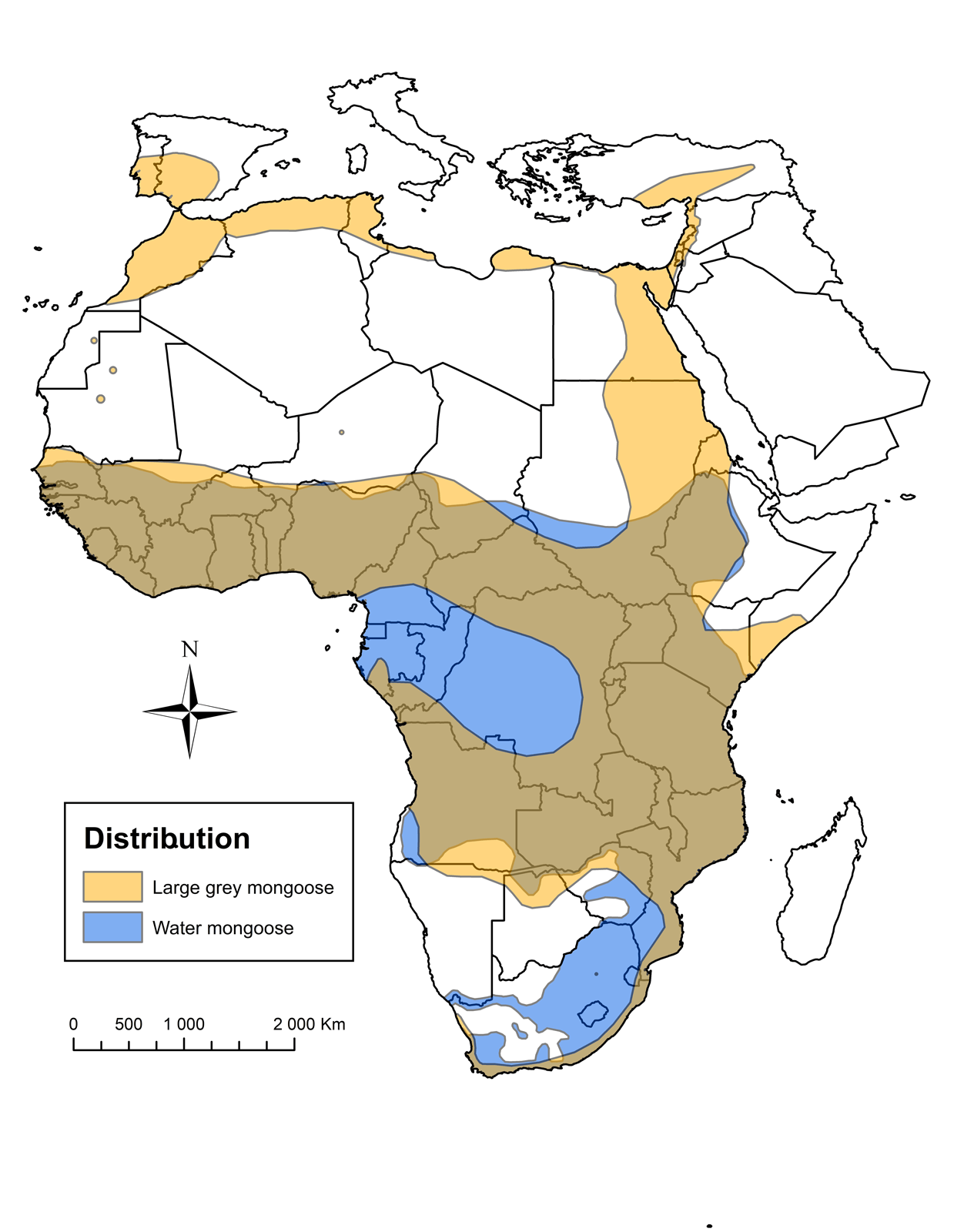 Both the large grey and water mongoose are classified as least concern by the International Union for Conservation of Nature (IUCN). The species are common, and populations are believed to be stable and decreasing respectively in their natural habitat. Unfortunately, this statistic was last revised in 2016 for large grey and 2008 for water mongoose, and the lack of current research cannot be ignored.

They share common threats including habitat transformation (agricultural and urban), destruction (degradation of water quality and grasslands) and anthropogenic pressures (domestic animals, indirect predator control and muthi trade). There is a growing concern of the effects which climate change may have on the populations of these two species.

Advances in GPS telemetry allows for the active monitoring and data collection from birds to sharks, and everything in between. GPS telemetry is particularly useful when tracking animals that are elusive in nature or live in inaccessible terrain. Researchers can gather large quantities of data over seasons, years and even decades on tracked animals to gain insight on how an animal moves and lives in its environment. A locally based company, Animal Trackem produced and manufactured mongoose appropriate sized GPS/UHF collars to collect data on these elusive mongooses.

From September 2016 to October 2019, 25 mongooses (19 water mongoose and six large grey mongoose) were fitted with GPS/UHF collars on sites in the KZN Midlands and Kloof, eThekwini. Other data that was collected from these animals include morphometrics, bloods and DNA. 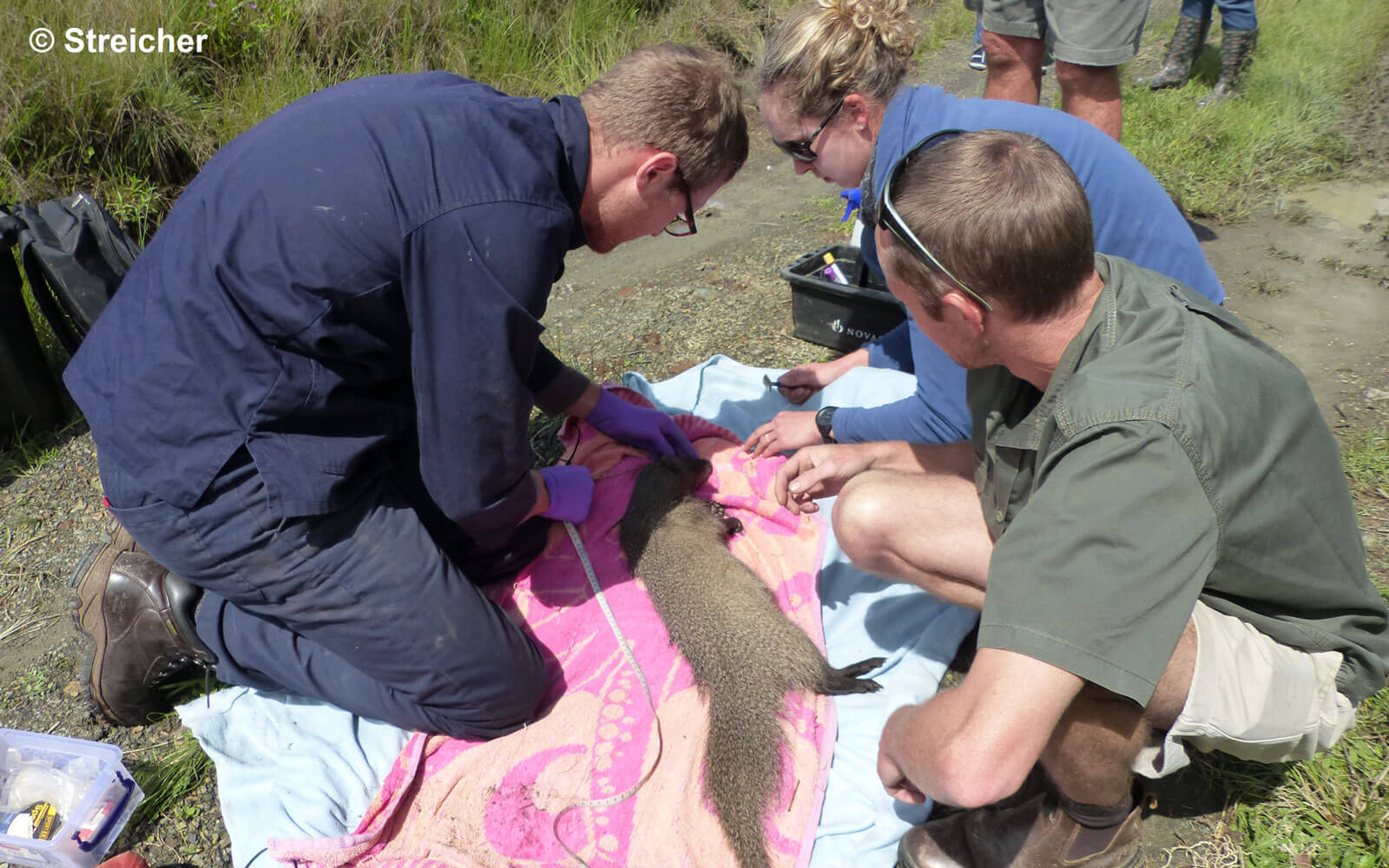 These GPS tracked mongooses were unaffected by their new piece of jewellery as all individuals stayed in their territory. 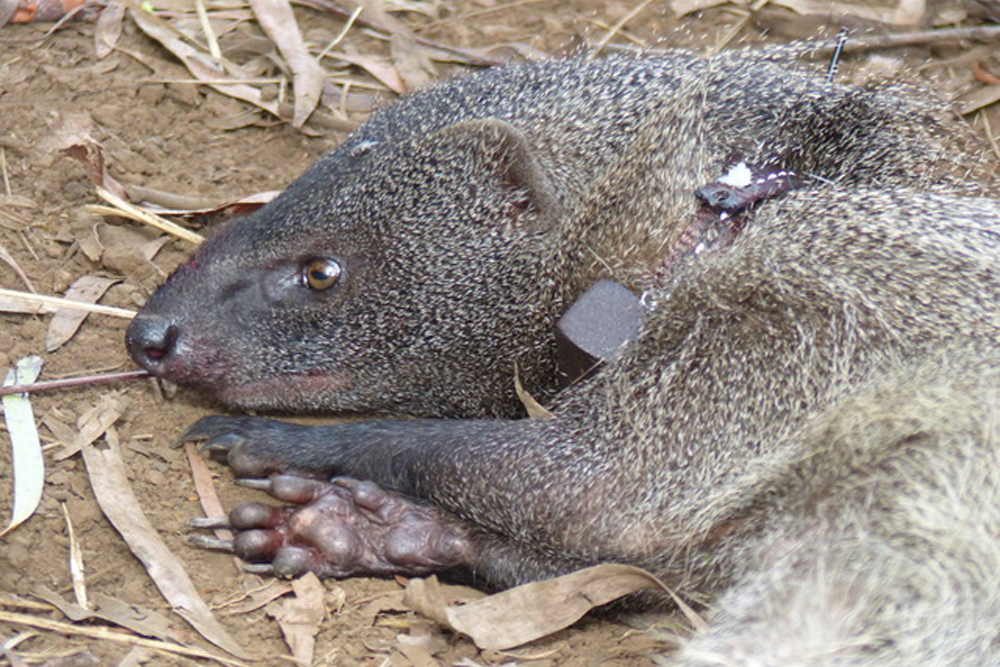 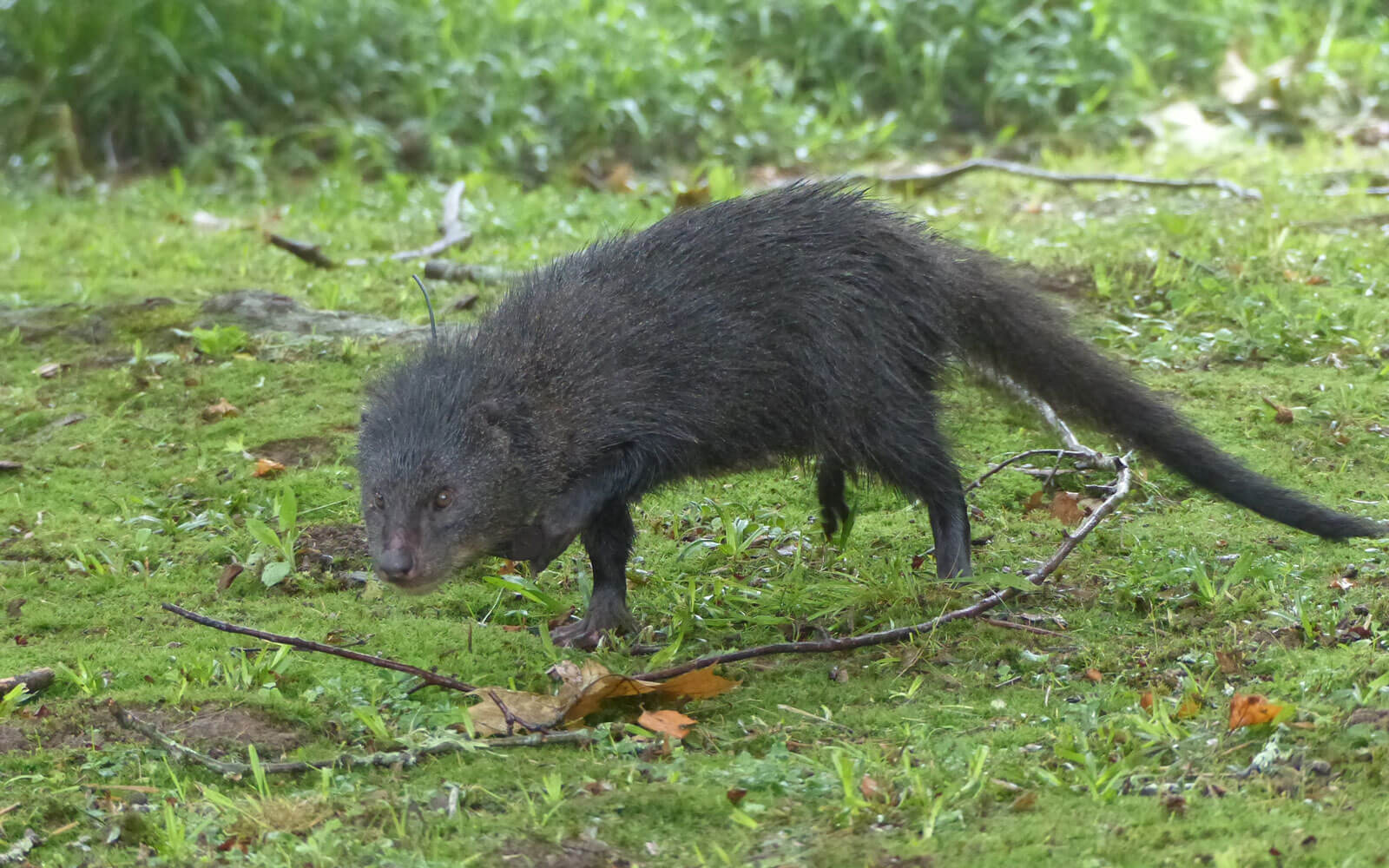 Over 6000 GPS points were cumulatively gathered by the collared mongooses, making it the most extensive data set for these two species of mongooses in Africa. The data will allow us to analyse home range, habitat use, movement dynamics, activity and intraspecific (within species) and interspecific (between species) interactions. 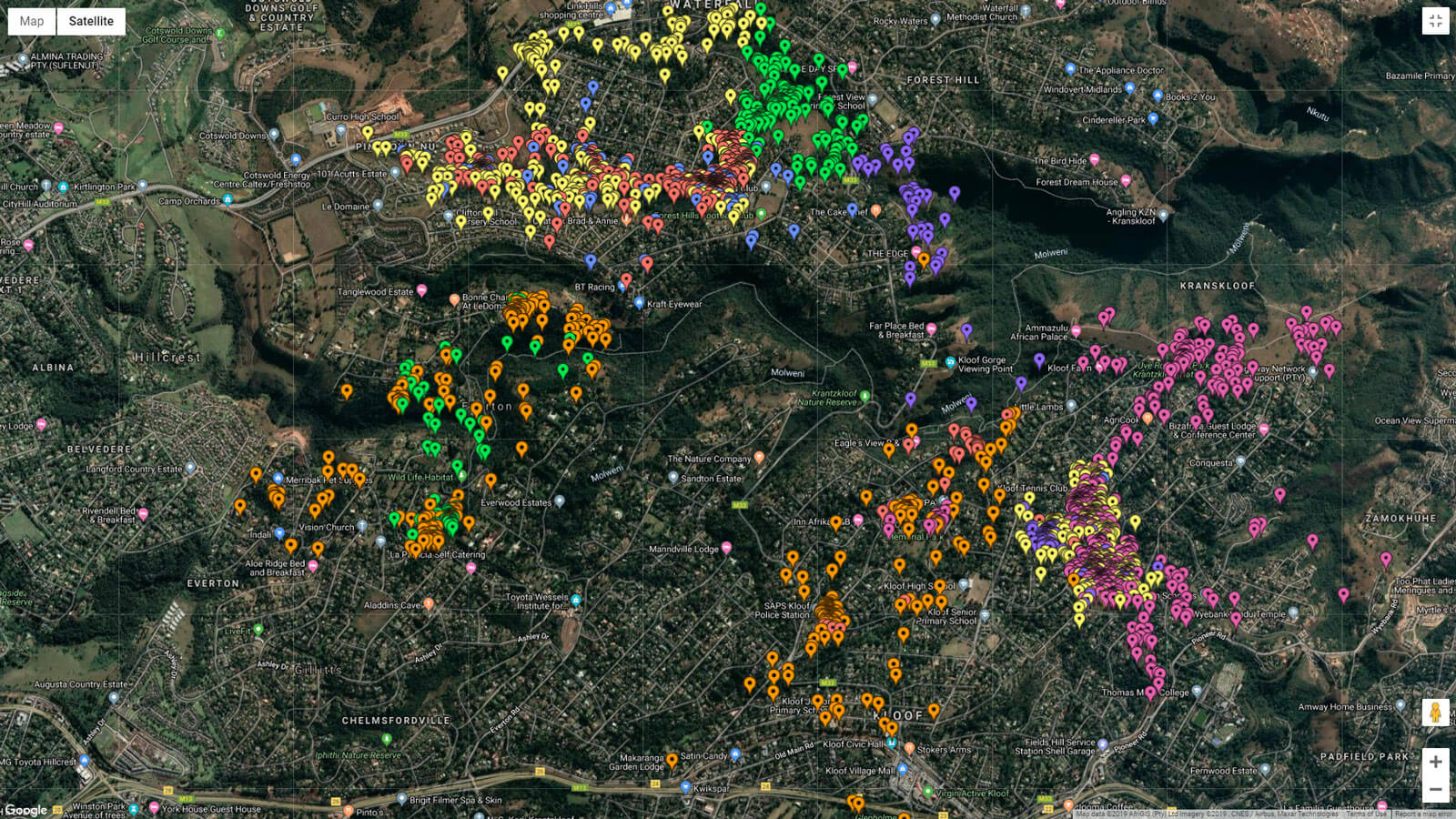 Home range analysis was performed on the GPS data collected by the collared mongooses. Mean home range for both large grey and water mongooses in the KZN midlands were 7x and 4x respectively larger than previous literature has stated. To put the ratio into context, previous vs updated home range estimates for water mongoose in KZN Midlands, can be graphically represented by the size ratio present between the moon and earth. 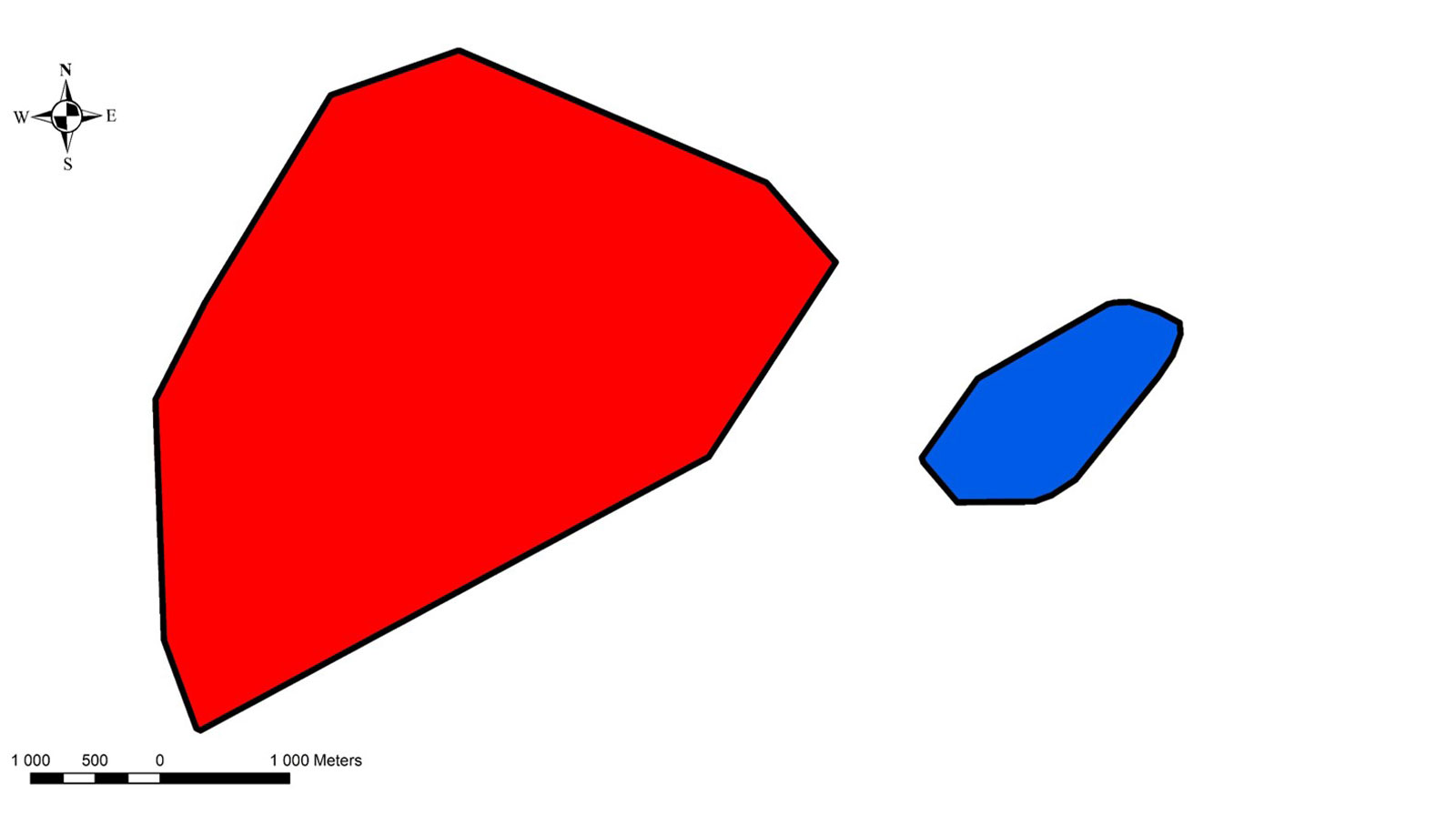 Although agricultural farmlands are primarily monocultural and fragmented, mongooses are still able to move reasonably freely between resource patches to find suitable habitats and establish home ranges. Within the heavily urbanised matrix of eThekwini, there is a constant battle for space and resources. These two species of mongooses have less of an opportunity to disperse to new ranges to avoid competition. These facts provide possible explanations to why there is such a stark difference between farmland and urban mongooses territory size for these two species.

The importance of the Durban Metropolitan Open Space System (D’MOSS), cannot be understated. However, the lack of connectivity between these D’MOSS patches is a significant area of concern for conservation. When animals attempt to disperse from their natal ranges to establish their own territory, they face the threats of car collisions and antagonistic encounters with domestic pets. Sink populations are therefore not easily established from the source population, which is potentially exacerbating population decline and genetic inbreeding. The formation of natural corridors that allows the free and undisturbed passage of animals from source populations to sinks could have a positive effect on the population numbers and diversity of animals on the whole in the area.

Mongooses are just as in need of our full attention and should not be relegated to the backstage of conservation. I hope this article has brought two members of the Herpestidae family onto centre stage, and has highlighted how incredibly diverse, quick-witted and innovative they are. The results we have shown thus far, highlight the adaptability and plasticity of the large grey and water mongoose in mixed levels of anthropogenically modified landscapes. 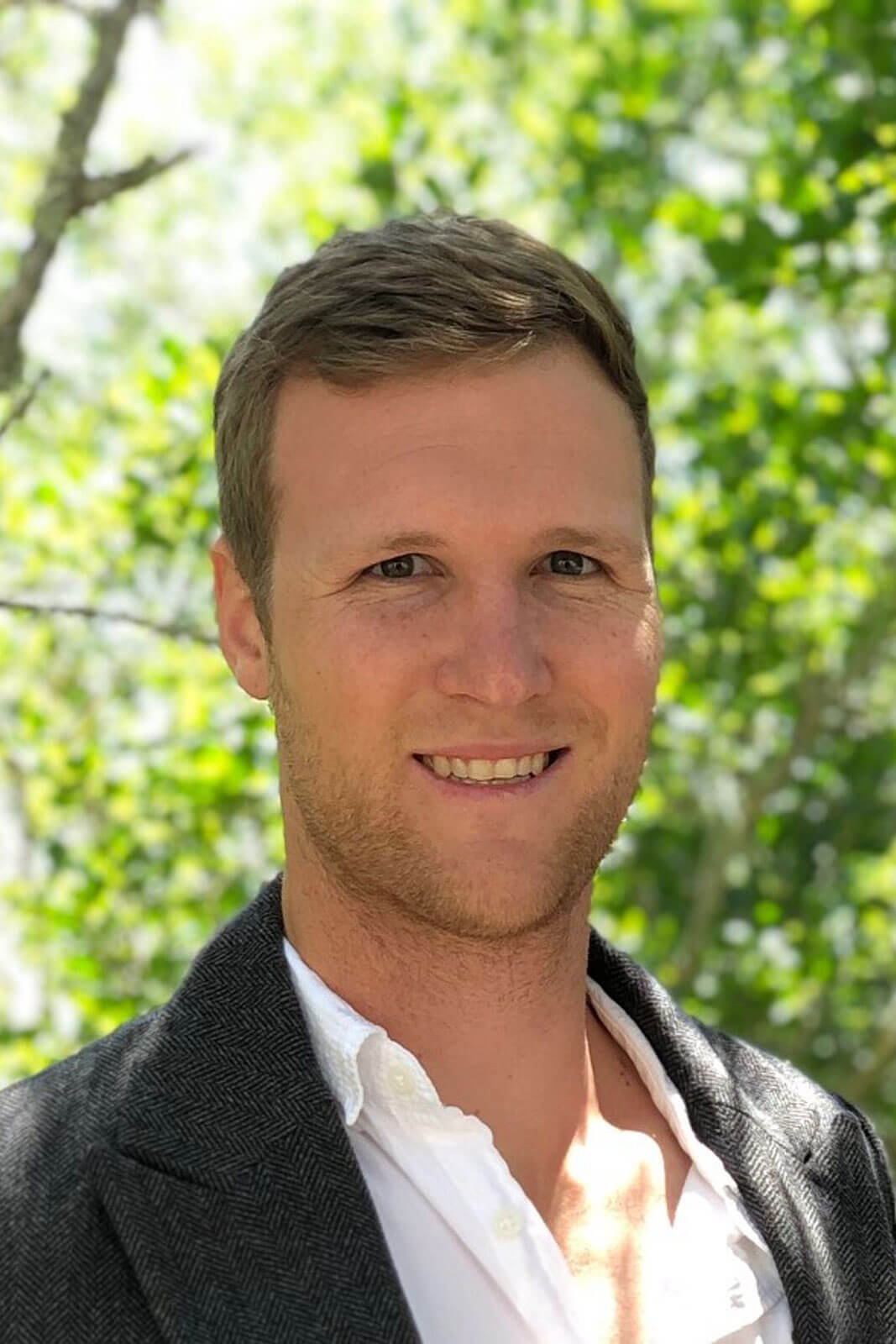 Jarryd Streicher is a young enthusiastic scientist striving towards making a difference in both wildlife conservation and communities. His research interests lie in field-based conservation by observing and documenting behavioural interactions between fauna and their environment. He is currently a PhD student of the Centre for Functional Biodiversity, at the University of KwaZulu-Natal. He is being supervised of Prof. Colleen. T. Downs and co-supervised by Dr. Tharmalingam Ramesh. His PhD thesis is investigating the spatio-temporal ecology of two mongoose species across a land-use gradient matrix in KwaZulu-Natal, South Africa.