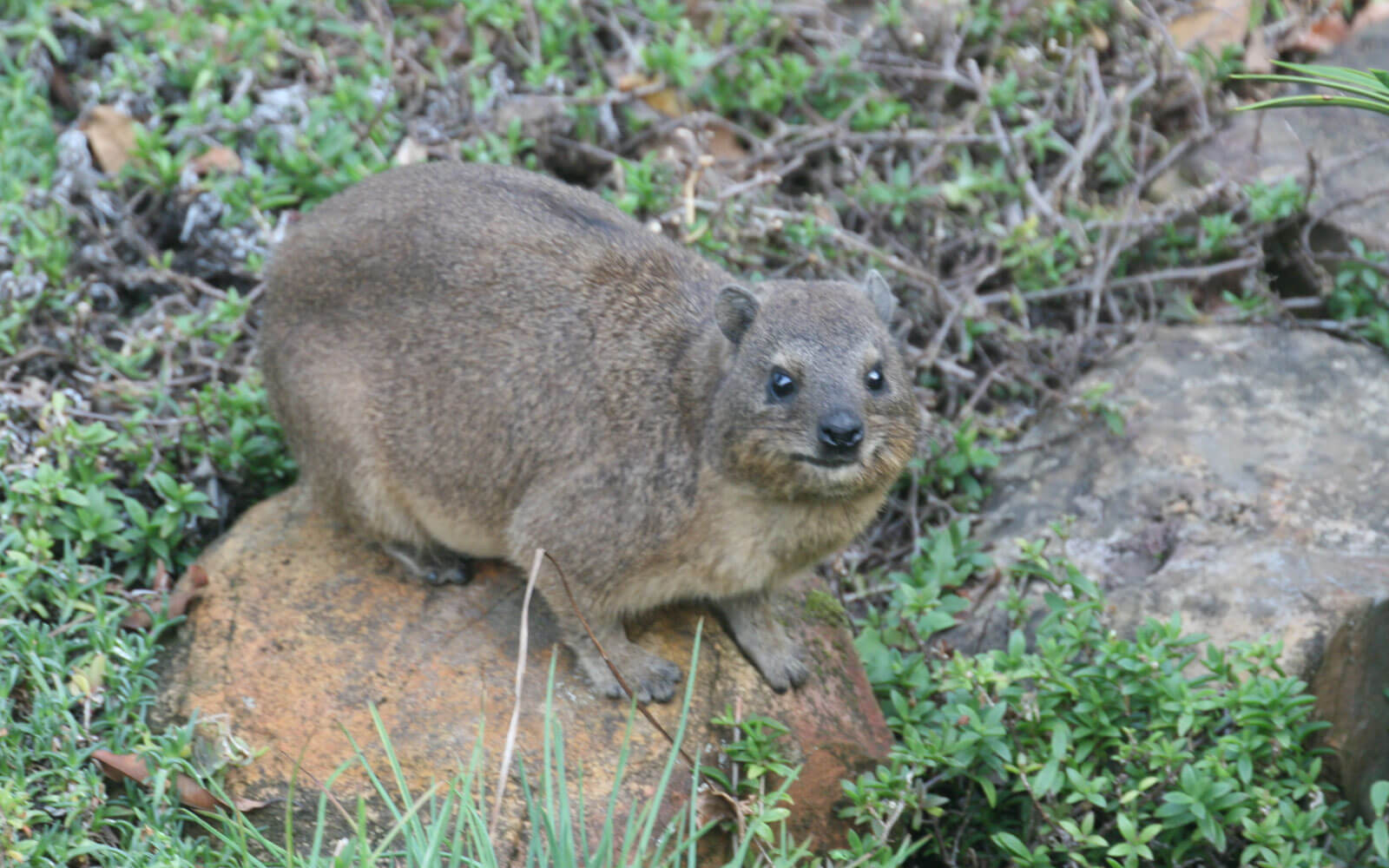 A Dassie sunning itself in a well-established garden

Almost seven decades ago, I was investigating Nguni folklore in southern Matabeleland, in present Zimbabwe. One of my informants was an elderly man, Jacob Ngwenya, who told me why mbila, the rock-rabbit (known to many South Africans as the dassie) and called scientifically, my biologist wife informs me, the hyrax, which peers timidly, often from a rocky eminence, behaves in this cautious way. His explanation was simple. One day, Mlimo, the Great Spirit, conscious of how many creatures were pestered by flies, began to distribute to all the animals’ tails, which could be used as fly-whisks. But because of the dassie’s nervous disposition, it was last in the queue. And, by the time it reached the distribution point, the supply of tails was exhausted, so someone or something must have acquired two. Since that day, therefore, the cautious rock rabbit has been on the lookout for an animal with two tails. Folklore has a way providing neat solutions to complex questions.

Reay Smithers, in his Land Mammals of Southern Africa (1986) reports that the dassie (Procavia capensis) is widespread throughout the region. He also states that this mammal has no external tail, giving point to the Matabele legend, (although Wikipedia asserts that it has a short tail). The general distribution of the species, however, appears to extend much further north. In the ancient Hebrew scriptures, there are two references to ‘coneys’ (Psalm 104.18; Proverbs 30.20), as little creatures which, although small and weak, find safety in the crags, which is typical dassie behaviour as we know it. And the name given to ‘Coney Island’ in the United States, suggests that when the first European settlers arrived, the hyrax was to be found in North America as well. However, as these first settlers in the area were Dutch, the island may have been named after the humble rabbit, which in the tongue of the Netherlands is konijn.

All this, however, is well in the past. When Jean and I retired to Waterfall almost two decades ago, dassies very soon became a feature of daily life. At least one family of the creatures took up residence in our storm-water drainage system, apparently finding edible plants enough in our gardens to sustain their lifestyle. In fact, we produced several items centred in their occupation, one of which is reproduced here. For several years, hyraxes and humans were able to achieve peaceful co-existence. Our youngest granddaughter astutely observed that whereas her other grandparents had a dog and a cat, we at Umdoni Vale had dassies.

A family of Dassies unconcerned about their proximity to habitation

But with the passage of time, the dassies became more and more of a nuisance. Those humans living in close proximity to the drains complained of the smell emanating from them. Then some venturesome hyraxes made their way into human habitations. A mother and three of her small offspring found refuge under our sundeck. I tried to discourage them by sprinkling Jeyes fluid around but this old-wives’ remedy helped not at all. Fortuitously, their occupation was soon followed by the arrival of a team of contractors to renovate the deck. The resultant banging and crashing, to say nothing of the whine of an electric drill, caused the interlopers to withdraw to a large Flat Crowned albizia in the garden.

For a little while, this appeared to be a satisfactory remedy. Soon, however, we were wakened night after night by the peremptory bleats of the mother and the responding squeaks of her young, which seemed to go on for hours on end. Our neighbours were less fortunate. They had trellises on their outside wall which gave access to the eaves and, under them, to the ceilings. Before long, noisome streaks appeared on the cornices in their living room. And the squealing of baby dassies and the remonstrations of their anxious mother, graphically described by Reay Smithers as “a wide repertoire of vocalisations including grunts, growls, wails, twitters and snorts”, kept the humans below awake much of the night.

At a complex across the road, Waterfall Gardens, meanwhile, which fronts on the same valley, human-dassie relations had markedly deteriorated. The hyraxes found their way into garages and under car bonnets. Not only did they foul engine compartments but they gnawed through electric cables, triggering short-circuits in more than one vehicle.

The directors of our complex, facing similar problems, adopted a proactive policy. They constructed barriers to close our drains to the intruders. They then installed large wooden cages with only one way in and no exit, creating traps in which venturesome hyraxes could be enclosed. These cages were then transported deep into the valley, where the prisoners were released, in the hope that they would adapt to a new environment. Their natural enemies are reported to include the crowned eagle, which regularly visits our skies from Krantzkloof, so perhaps this will help restore a natural balance, when the generation of adult dassies which remembers the delights of human cultivation has passed on.

It may be, however, that some far more complicated change is taking place. We live in a region where human settlement has extended into many areas previously left undisturbed, with all the negative implications of such a development.

When, in 1967, I first moved to the Outer West, there were wetlands, clearly visible in the rainy season, from Emberton, all the way along the R103 (Old Main Road) past Botha’s Hill, to Alverstone. There was a dam at the foot of the Giba gorge, originally intended to supply early Hillcrest with water, wherein the 1970s, I used to take my small children to fish. There was ground water just to the north of the site later occupied by the Heritage Market and now Oxford Stores. The Springside Nature Reserve was built around another wetland. At the foot of Botha’s Hill, where a side road crosses the railway line into West Riding, at what used to be called Padley’s Crossing, there was yet another wetland. And, on the other side of Botha’s Hill, in the Assagay valley, the Umhlatuzana River rises in a wetland of its own.

A farm in that area had the revealing name Duckponds. And the first white settler, after the Great Trek, named the farm covering much of present Hillcrest Buffelsfontein. The Afrikaans word fontein means a spring or a wetland. Another trekker, who occupied land running eastwards to the source of the Nkutu river, on which early Hillcrest came to depend for its water, chose to call his farm Langefontein. The late Jimmy Grace, who grew up and later settled in post-1945 Crestholme, asserted a few years ago that the Nkutu had never in his memory run dry until the area around its headwaters was drained and cleared for the building of up-market housing estate.

But, during my time in the area, the demand increased for secure housing within commuting distance of Durban. Numerous plots were made available to the general public and many gated estates were constructed. And much of this development was made possible by the draining of wetlands. Eighteen years ago, my wife and I bought a property in one of these gated estates. It was not on a drained wetland, but it was on the side of a deep valley with a natural watercourse at its bottom. In the undergrowth, porcupines and wild pigs had their homes. A venerable iguana lizard used to make his leisurely way each morning, across our front lawn before swimming in our neighbour’s pool. A troop of vervet moneys crossed the valley on an old telephone line before stopping for the youngsters to romp and wrestle in the branches of a tall albizia which now shades our sundeck. One evening we saw a genet on the deck busy gorging on flying ants. And often, of a morning, we would see a solitary bushbuck and a small duiker grazing on the grassland across the valley. Most days, too, a neighbour would loose a couple of saddle horses to graze on the veld. But over the years, that veld has been overgrown by exotic saplings from the opposite hillside.

So, we chose to live in an area where human habitation has impinged upon the natural environment. Are we then in a position to regard the dassies as interlopers, just because we had the means to acquire a portion of that natural environment? I think not.

“Green are the hills…”

There used to be an old provincial ‘anthem’: “Green are the Hills of Natal’, reportedly written between the World Wars by a Pietermaritzburg music lecturer. But that referred to grassland rather than to forestry. Various settlers over the generations have introduced exotic timbers for their own interests: wattle, eucalyptus gum and pine, each of which played an important role in the regional economy and all identified by Prof. Eugene Moll, in What’s that Tree? (2011) as species alien to the region.

And, in the past two decades, the open grassland to the north of our home has become a crowded forest of saplings, all of alien species. The suburb to the east, an offshoot of Kloof, has been named Forest Hills, but the name comes from the exotic trees planted there for profit, not through natural afforestation. The hillside on which we live, now wall-to-wall with residential complexes, was, a century ago, a succession of small farmsteads, occupied largely by second- or third-generation settlers from New Germany and Pinetown. The daughter of one of these settlers, Regina Harborth (who later became Mrs Cliff Field of Emberton) left an account of a close-knit community. Her story has been preserved by the late Tom Halstead, who married Sheila Gillitt, in his account of his wife’s family in Natal.

It is an inescapable fact that the story of the Outer West can be summarized in the names of individual men who acquired land and held it as a source of wealth: Murray, Field, Gillitt and Stott. And it gives point to the land claims made by various African communities since 1994.

This is why it is so terribly important that nature reserves and other protected areas should be preserved at any cost. Only in that way will children of all races be able to learn about the natural wonders of the region in which they live: the trees, the plants, the birds, the animals, the insects. If those few natural areas are swallowed up by housing estates and complexes, the heritage of the children will be irretrievably marred and the whole community will be the poorer.

We have moved a very long way from the dassies with which this article began. But perhaps the journey has given each one of us something important to think about. 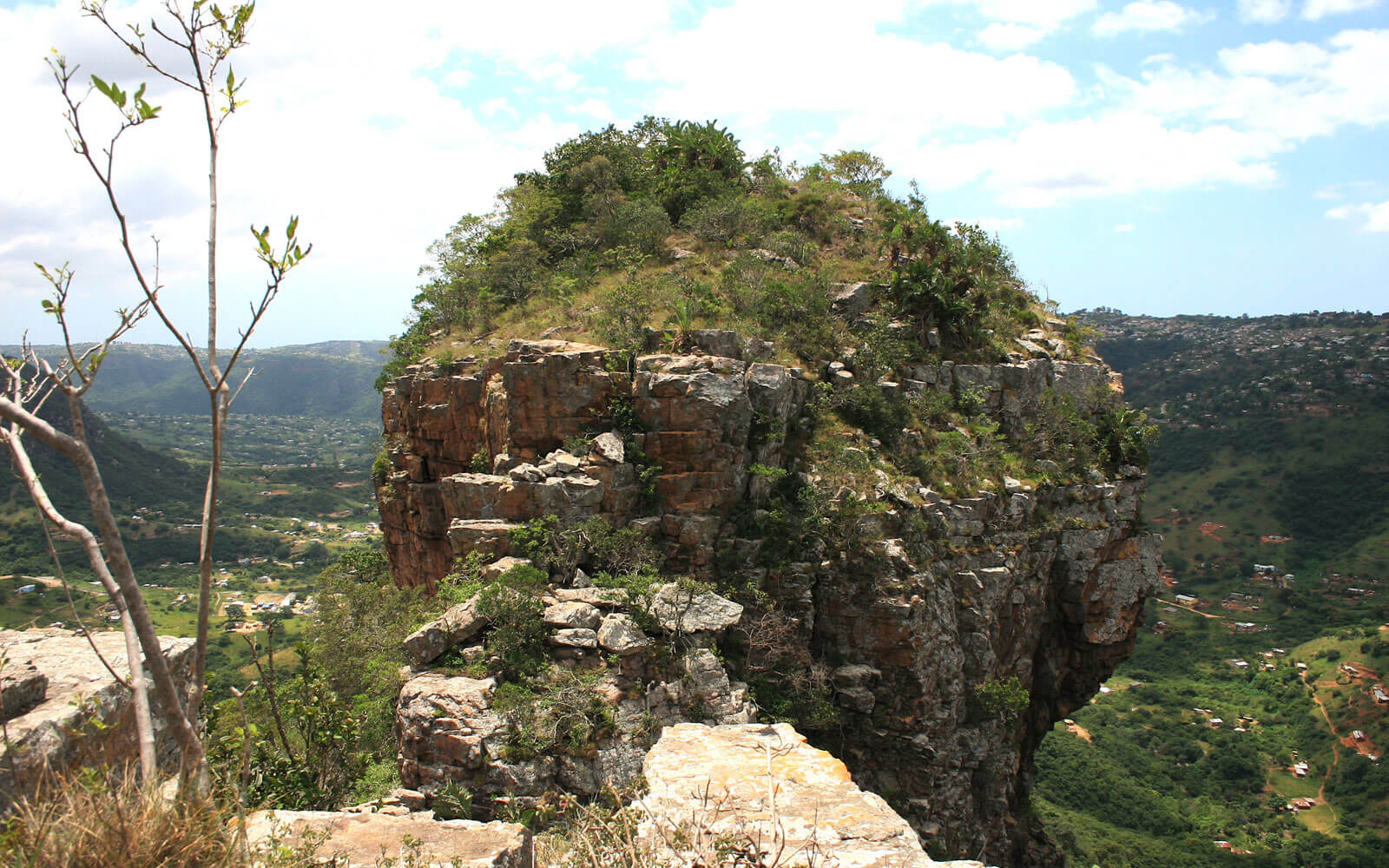